Who made the first cars?

Beginning in the 1770s, many people tried to make cars that would run on steam. Some early steam cars worked well, and some did not. Some were fire pumpers that moved by themselves, and others were small locomotives with road wheels. Beginning in the 1880s, inventors tried very hard to make cars that would run well enough to use every day. These experimental cars ran on steam, gasoline, or electricity. By the 1890s, Europeans were buying and driving cars made by Benz, Daimler, Panhard, and others, and Americans were buying and driving cars made by Duryea, Haynes, Winton, and others. By 1905 gasoline cars were more popular than steam or electric cars because they were easier to use and could travel further without adding fuel. By 1910 gasoline cars became larger and more powerful, and some had folding tops to keep drivers and passengers out of the rain.

How did the first cars work?

A steam car burned fuel that heated water in a boiler. This process made steam that expanded and pushed pistons, which turned a crankshaft. An electric car had a battery that powered a small electric motor, which turned a drive shaft. A gasoline car ignited fuel that caused a small explosion inside each cylinder. This explosion pushed the piston and turned a crankshaft connected to the wheels by a chain or drive shaft.

Who drove the first cars?

In 1900 wealthy people bought cars for pleasure, comfort, and status. Many doctors bought small, affordable cars because they were more dependable than horses and easier to keep ready. Rural Americans liked cars because they could cover long distances without depending on trains. They carried produce to market, went to stores and movies in town, and even used their cars to plow fields. Families in towns and cities liked cars because they were handy for errands, going to the train station, visiting relatives, going to church, and going on drives in the country. A family’s house with a car in the driveway has been a common sight since about 1910. Young people liked cars because they could go to movies, restaurants, and other fun places instead of staying at home with their parents.

Why do so many people use cars?

Cars are fast, comfortable, nice looking, and fun to drive. They can go almost anywhere, and they are always ready for use. In many ways, driving is easier than walking, biking, or riding in a train, bus, or airplane. But owning a car is a big responsibility. It takes a lot of money to buy one and keep it running, and drivers must be trained, licensed, and always alert to avoid mistakes and accidents. It takes a lot of space to park cars, and too many cars cause congestion on roads and in parking lots. Some car owners have returned to walking, biking, or riding a train or bus when it’s more practical or convenient. For most Americans, cars are a favorite way to travel, but there will always be a need for other types of transportation.

What was different about the Ford Model T? 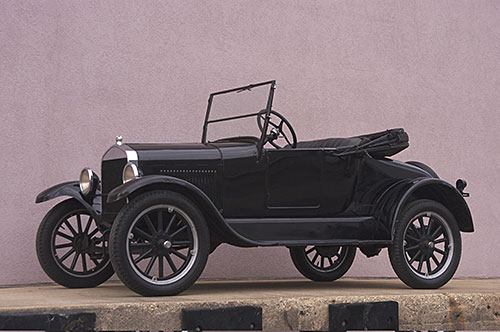 Ford Model T
Built near the end of the Model-T era, this Model-T roadster came off the assembly line in 1926. Courtesy of the National Museum of American History.

The Ford Model T, made between 1908 and 1927, cost less than other cars, but it was sturdy and practical. It ran well on dirt roads and fields because it could twist as it rolled over bumps. The Model T looked like an expensive car but actually was very simply equipped. From 1915 to 1925, it only came in black because black paint dried faster than other colors, making it possible to build and sell more Model Ts. For all of these reasons, more Model Ts were sold than any other type of car at the time—a total of just over 15 million. Farmers, factory workers, school teachers, and many other Americans changed from horses or trains to cars when they bought Model Ts.

Why do most cars today run on gasoline?

The gasoline engine has been reliable, practical, and fairly efficient since about 1900. It is easier to control than a steam engine and less likely to burn or explode. A gasoline car can go much further on a tank of gasoline than an electric car can go between battery charges. Gasoline engines have been improved by the use of computers, fuel injectors, and other devices. But growing concern about chemicals that gasoline engines release into the air (i.e., pollution) have led to new interest in clean, electric cars and cars that run on natural gas, a vapor that is different from gasoline.

How many cars are in the Smithsonian?

The Smithsonian Automobile Collection in the Division of Work and Industry at the National Musuem of American History contains around 80 full-size automobiles. The automobile collection attempts to include significant automotive milestones as cars changed from horseless carriages to an intrinsic part of American life. The Smithsonian has been collecting cars since 1899, and almost all of them have been given by people or businesses.

Where can I see more early cars in person and on the Web?

Some of the Smithsonian’s cars are on loan to the Western Reserve Historical Society in Cleveland, Ohio, the Onondaga Historical Association in Syracuse, New York, the Indianapolis Motor Speedway Hall of Fame in Indianapolis, Indiana, and the Eastern Museum of Motor Racing in York Springs, Pennsylvania. Major car museums not connected with the Smithsonian include the Henry Ford Museum in Dearborn, Michigan, the National Automobile Museum in Reno, Nevada, the Imperial Palace Collection in Las Vegas, Nevada and Biloxi, Mississippi, the Petersen Automotive Museum in Los Angeles, California, the Auburn-Cord-Duesenberg Museum in Auburn, Indiana, and the Owl’s Head Museum in Owl’s Head, Maine.

Where else can I find out about cars on the Web?

A Brief History of The First 100 Years of the Automobile Industry in the United States: www.theautochannel.com/mania/industry.orig/history

Prepared by the Division of the History of Technology,
Transportation Collections, National Museum of American History,
in cooperation with Public Inquiry Services
TRA40 2/2000, revised 4/2001