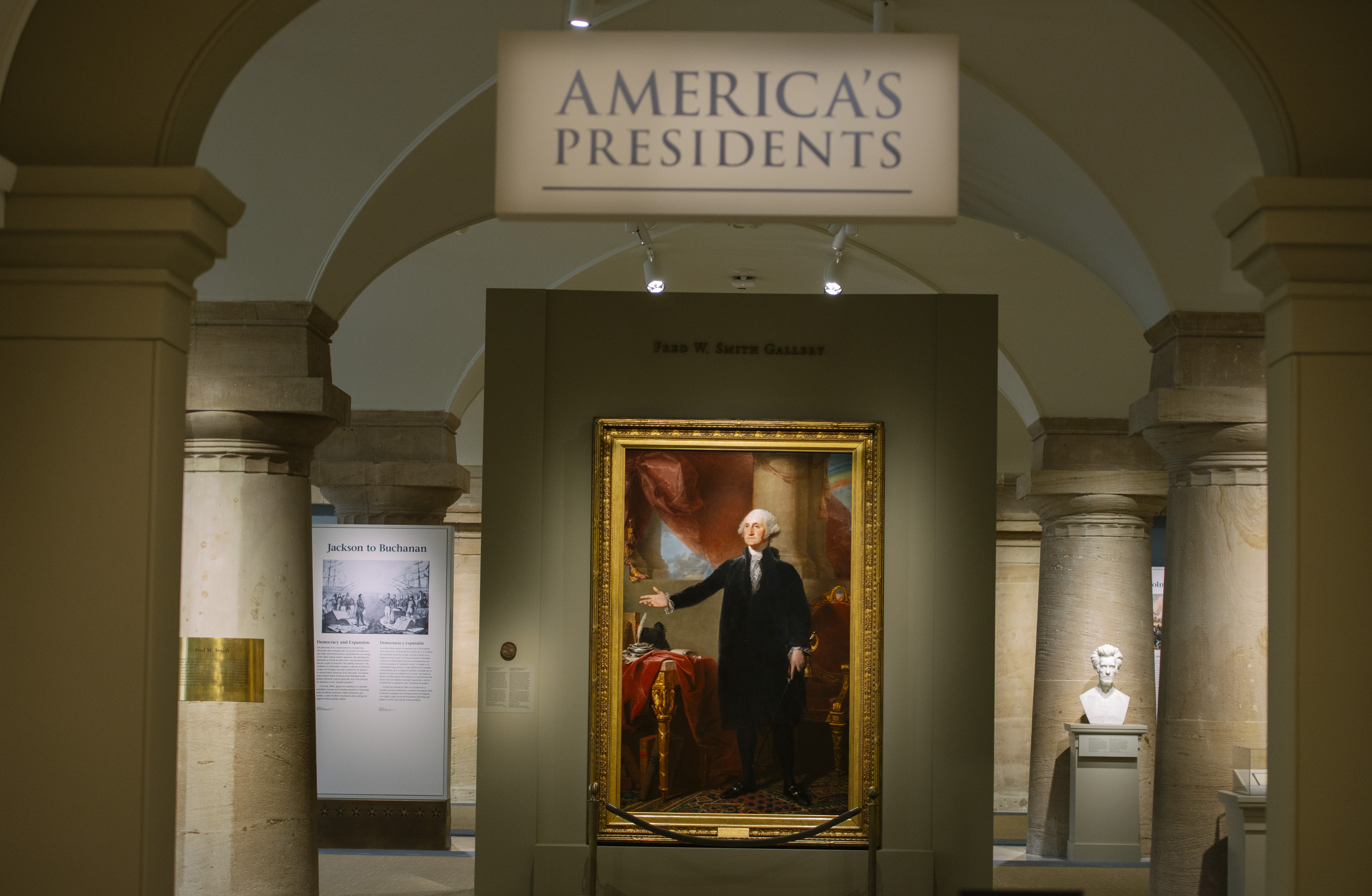 This February, the Smithsonian’s National Portrait Gallery will celebrate the 50th anniversary of its “America’s Presidents” exhibition with a multifaceted program. Highlights include the installation of two recently acquired portraits and a series of special events. The recently transformed “America’s Presidents” exhibition will welcome two additions: the official portrait of former President Barack Obama, a new National Portrait Gallery commission by contemporary artist Kehinde Wiley which will be on view Feb. 13, and the 1843 daguerreotype of President John Quincy Adams—the earliest known photographic likeness of a U.S. President.

As part of the special anniversary celebrations in the lead-up to this year’s Presidents Day weekend, the Obama and Adams portraits will be joined by the temporary installation of the rarely shown original print of the “cracked-plate” photograph of President Abraham Lincoln, one of the most haunting portraits of any president. Taken by Alexander Gardner Feb. 5, 1865, just weeks before Lincoln’s assassination, the original glass-plate negative broke. Gardner made only one print from the damaged negative before discarding it. This work was last on view to the public in 2016. The cracked-plate portrait will be on view Feb. 7–27.

The portrait of Adams is a unique daguerreotype and was produced by artist Philip Haas in his Washington, D.C., studio just four years after Louis Daguerre’s radical invention was revealed to the world. Described by experts as “an invaluable document,” this daguerreotype “crystallizes a remarkable moment in the history of photography and American politics.” The National Portrait Gallery’s acquisition of the Adams portrait was made possible with support from several donors. This daguerreotype will go on view Feb. 7.

These additions follow the major reinstallation and renovation of the “America’s Presidents” exhibition, which reopened to the public last September, including an extensive 18-month restoration of the acclaimed “Lansdowne” portrait of President George Washington by Gilbert Stuart. Additional technological enhancements continue this winter with the introduction of Smartify, a free app that allows visitors to scan and identify artworks, accessing rich bilingual biographical descriptions (English and Spanish) via text or audio.

This February, the Portrait Gallery will also launch the second phase of the “America’s Presidents” website, featuring a searchable database of the museum’s 1,600 presidential portraits. The site will also provide a wealth of presidential information and imagery from across the Smithsonian, benefitting students, teachers and the general public.

As part of the anniversary, the Portrait Gallery will debut, with Smithsonian Books, a new publication to accompany “America’s Presidents.” The richly illustrated volume traces the history of the U.S. presidency from Washington’s inauguration to the present day. The publication offers invaluable insight into the lives and legacies of each of the individuals and illuminates the timeless intersections that exist between biography, history and art. Beginning Feb. 13, the book will be available for purchase at the National Portrait Gallery store and online.

The renovation of the “America’s Presidents” exhibition has been made possible through the support of donors, including the Perlin Family Foundation; Philip and Elizabeth Ryan; The William T. Kemper Foundation, Jonathan and Nancy Lee Kemper; Alan and Lois Fern; Michael and Catherine Podell; and Mallory Walker.

The Portrait Gallery will also present a series of family programs on Presidents Day celebrating the founding fathers and the presidents who have led this country. Activities will include live music, art activities, tours with historians and a special appearance by the Washington Nationals’ Running Presidents. Festivities will take place Saturday, Feb. 17, 11:30 a.m.–3 p.m. in the Robert and Arlene Kogod Courtyard. The National Portrait Gallery Presidents Day program is presented in collaboration with Lincoln’s Cottage and DC Public Library.