The Smithsonian’s National Air and Space Museum has received $10 million from the Kislak Family Foundation to support the creation of the new “World War II in the Air” exhibition. Construction on the gallery is scheduled to begin in 2022 and is part of the museum’s ongoing transformation of all its galleries at the flagship building in Washington, D.C.

“The generous support from the Kislak Family Foundation will allow the museum to better share the history of when military aviation came of age,” said Ellen Stofan, John and Adrienne Mars Director of the National Air and Space Museum. “We are honored to be able to tell the stories of World War II veterans, like Jay Kislak, through this exhibition.”

“World War II in the Air” will examine how the revolution in warfare that took place during the war redefined the promise and peril of military aviation. It will also explore the dramatic changes to flight and culture that continue to reverberate through society today. The exhibition will feature rare fighter aircraft such as the North American P-51D Mustang, the Eastern Aircraft (Grumman) FM-1 Wildcat and the Messerschmitt Bf 109 G, as well as smaller artifacts that tell the stories of workers from all walks of life that helped the United States and its Allies defeat their enemies.

In recognition of the gift, the exhibition will be named the “Jay I. Kislak World War II in the Air” gallery in honor of Jay I. Kislak and all World War II veterans. After graduating early from The Wharton School at the University of Pennsylvania, Kislak enlisted in the U.S. Navy during World War II. Following three years of active duty with the naval air ferry squadrons, he served in the Naval Reserve for many years and continued piloting into his 90s.

“My father was very proud of his military service, and of those with whom he served,” said Dr. Paula Kislak, chair of the Kislak Family Foundation. “He attributed his subsequent success and accomplishments in life to the character-building lessons he learned as a naval aviator. We in the family and at the foundation enthusiastically and humbly embrace the opportunity to support the Smithsonian’s National Air and Space Museum, and to put the name Jay I. Kislak on what we know will be a beautiful and inspiring gallery dedicated to all who served our country during World War II.”

The Kislak Family Foundation is based in Miami Lakes, Florida, and supports leadership and innovation in the fields of education, arts and humanities, animal welfare and environmental preservation, and provides funding to a wide range of nonprofit organizations and projects.

The exhibition is located on the east end of the building and will be part of the second major phase of the museum’s renovation. It is anticipated to open in 2025. For more information about how the museum is transforming all of its exhibitions and revitalizing the building, visit https://airandspace.si.edu/reimagining-air-and-space. 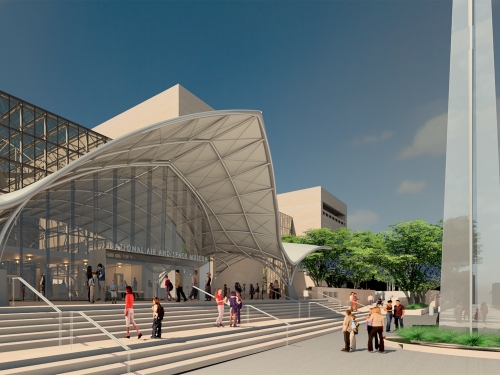