Flight of the Butterflies in 3D Soars on the Giant Screen of the Smithsonian’s National Museum of Natural History Oct. 5

3-D Adventure Captures One of the Longest Migrations on Earth
October 4, 2012
News Release 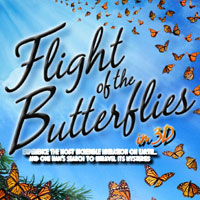 Smithsonian Theaters will launch a new giant-screen film, Flight of the Butterflies in 3D, Friday, Oct. 5, at the Johnson IMAX Theater in the National Museum of Natural History. Based on a true story, the 44-minute documentary immerses audiences in a triumphant journey of perseverance that spans thousands of miles and several generations—tracking monarch butterflies to their mysterious Mexican winter haven where audiences will see hundreds of millions of butterflies come together high in the mountains of Mexico.

The film is the awe-inspiring story of two unlikely heroes that share a common strength. Based on true events, it follows the epic journey of monarch butterflies in one of the most incredible migrations on Earth, and the determined scientist, Fred Urquhart, who spent 40 years trying to discover the mysteries surrounding their journey and secret winter hideaway.

What began with a small boy daydreaming about where butterflies went each winter became a lifelong pursuit by Urquhart, who enlisted the help of legions of volunteers, known as “citizen scientists,” to help with tagging and tracking the butterflies. The decades-long quest yielded the ultimate discovery of the monarch butterflies’ overwintering sites in the sanctuaries of Mexico.

Through spectacular giant screen/IMAX technology audiences are transported into the tiny world of one intrepid creature—Dana (Danaus plexippus)—and her offspring as they migrate north from Mexico through the U.S. to Canada and back south again to the hidden butterfly sanctuaries set 10,000 feet high in the mountains of the States of Michoacán and Mexico.

The monarch butterfly is a marvel of nature. Weighing less than a penny, it makes one of the longest migrations on Earth across a continent, yet with pinpoint navigational accuracy, to a place it has never been. While much has been learned, scientists are still unraveling the many inter-related aspects of this phenomenon of the natural world. As the film illustrates, it takes two to three generations of butterflies to migrate north from Mexico through the U.S. to Canada and one “super generation” to complete the migration back south to Mexico.

Moviegoers will experience this journey up close and see the evolution from egg to caterpillar to pupa to butterfly captured for the first time thanks to MRI and micro CT scans—which bring audiences closer to the action than ever before. The close-up/macro photography work was undertaken in collaboration with Academy Award-winner Peter Parks (The Tree of Life). The film team also travels high into the mountain ranges and up tree canopies into the monarch sanctuaries of Mexico to capture stunning real footage of hundreds of millions of these magnificent creatures.

Flight of the Butterflies in 3D is a co-production between Mexico, Canada and the U.K. Director Mike Slee co-wrote the script with co-executive producer Wendy MacKeigan (Journey to Mecca: In the Footsteps of Ibn Battuta, The Water Brothers). The film’s executive producer is Jonathan Barker (Bugs! 3D, Into the Deep 3D) and is distributed by SK Films.

Individual tickets for Flight of the Butterflies in 3D are on sale now and may be purchased up to two weeks in advance. Groups of 10 or more may reserve tickets now for any date during the film’s expected run. The public may visit any Smithsonian Theaters box office, call toll-free (866) 868-7774 or visit www.si.edu/IMAX for information or to purchase tickets.