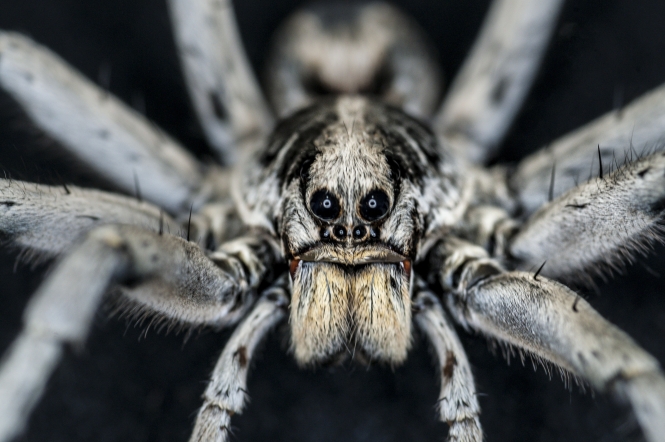 Wolf spiders (Lycosa Sp.) such as this one have great eyesight thanks to their two large forward-facing eyes plus six more! Instead of making webs to catch prey, wolf spiders are solitary hunters that depend on their terrific eyesight to hunt their prey at night.

Their diet consists of crickets, ants, other spiders and grasshoppers. Some of the larger species can even take down a small lizard or frog. Wolf spiders may be tough hunters, but they’re not without predators, including some species of hunting wasps. The wasp paralyzes the spider with its sting, drags it to a burrow and lays an egg on its body. When the wasp larva hatches, the wolf spider becomes its first meal.

Wolf spiders live mostly in forests, grasslands and woodlands and can easily be found in people’s backyards. But if you find one in your garden, don’t worry—their venom is not harmful to humans.

This particular wolf spider lives in the O. Orkin Insect Zoo at the Smithsonian’s National Museum of Natural History. Visit the museum’s Q?riuswebsite to explore its vast collections of spiders, other insects and more.