“When Dinosaurs Ruled the Earth” 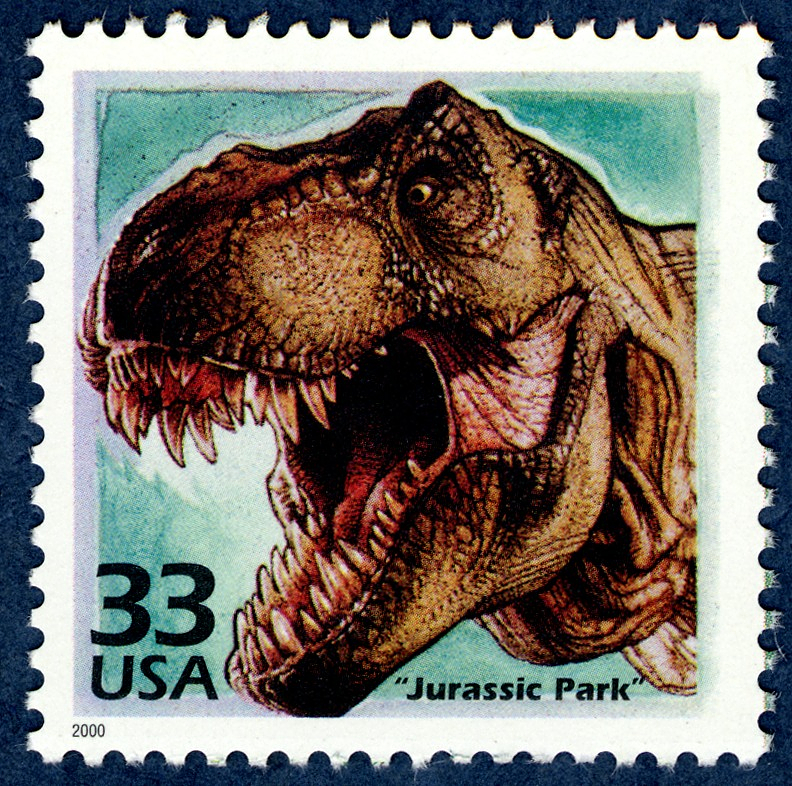 “Jurassic Park” stamp, part of a “Celebrate The Century: 1990s” souvenir sheet, issued by the U.S. Postal Service in 2000. (Courtesy of the Smithsonian’s National Postal Museum)

A banner declares “When Dinosaurs Ruled the Earth” in the visitor center featured in the film Jurassic Park. One of the highest-grossing movies of all time, Jurassic Park kicked off a media franchise that has seen four sequels (five with the release of Jurassic World: Fallen Kingdom this month), numerous video games and countless action figures.

This stamp, featuring the 1993 movie Jurassic Park’s iconic Tyrannosaurus rex, was released by the U.S. Postal Service in 2000 as part of a souvenir sheet “Celebrate The Century: 1990s.” Legendary movie-poster artist Drew Struzan illustrated the stamp. He is known for his more than 150 movie posters, including all the films in the Indiana Jones, Back to the Future and Star Wars film series.

The 15 commemorative stamps on the sheet covered some of the highlights of the 1990s, including the World Wide Web, the Gulf War, the TV show Seinfeld and cell phones. Along with Jurassic Park, the set included a stamp featuring another theatrical juggernaut of the 1990s: Titanic. More than 80 million stamps were printed.

This stamp, along with the rest of the “Celebrate The Century: 1990s” souvenir set, is in the collections of the Smithsonian’s National Postal Museum, which houses one of the world’s largest and most significant philatelic and postal history collections, and is one of the world’s most comprehensive library resources on philately and postal history. The physical stamp is not currently on view, but it can be viewed digitally in one of the museum’s William H. Gross Stamp Gallery interactive displays and on the museum’s online resource Arago.