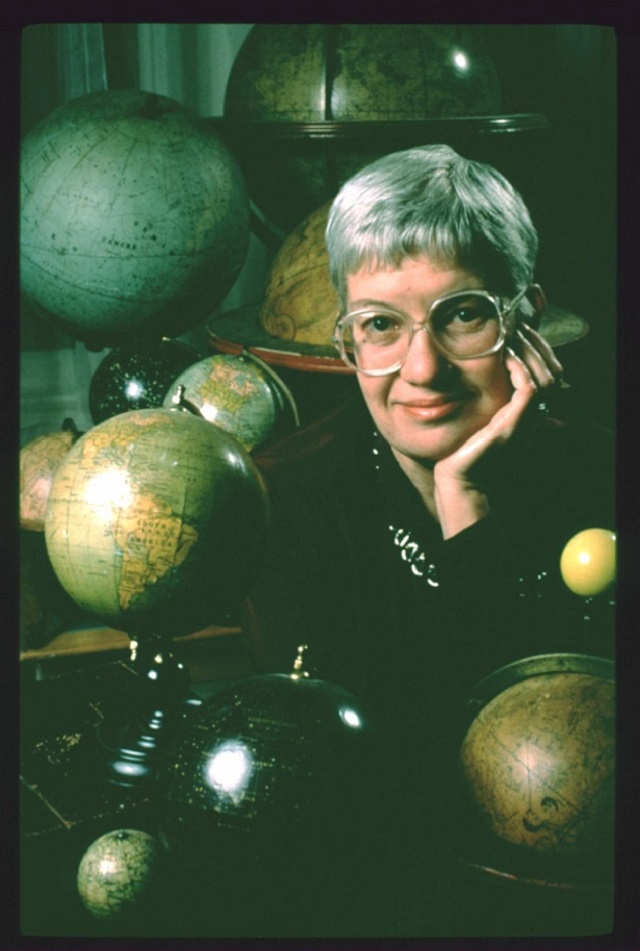 Vera Rubin among the many globes she collected, circa 1992. Smithsonian’s National Air and Space Museum.

“Each one of you can change the world, for you are made of star stuff, and you are connected to the universe.” —Vera Rubin, graduation address to University of California, Berkeley class of 1996

Astronomer Vera Rubin (1928–2016) is best known for finding evidence of “dark matter.” In 1977, she determined that about 90 percent of the mass in the universe is of unknown origin and cannot be seen, but it can be detected by how it distorts the behavior and motion of matter that can be seen, such as planets, stars and galaxies.

Rubin’s observations were a result of her collaboration with W. Kent Ford, an astronomer and instrument designer. Ford had built a special spectrograph that used a new optical amplifier; Rubin took the spectrograph to the powerful telescopes in the West to observe the universe. Rubin and Ford recorded spectroscopic signatures of tiny portions of distant galaxies and confirmed dark matter.

Rubin spent nearly her entire career at the Carnegie Institution of Science where she continued to study the large-scale motion of galaxies and galaxy clusters. She broke barriers for women and was widely regarded as a role model and mentor to women scientists.

Read more about Rubin on the Smithsonian’s National Air and Space Museum website: Women in Aviation and Space History: Vera Cooper Rubin and Capturing the Essence of Astronomer Vera Rubin. View the spectrograph Rubin and Ford developed in the museum’s collection. Discover more in our Smithsonian Spotlight on Women in Science.