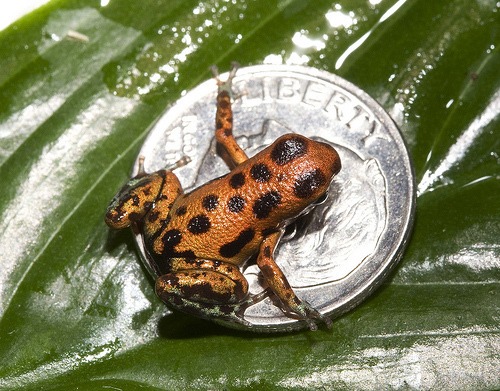 Vibrant but toxic, poison arrow frogs range from less than 1 inch to 2.5 inches in body length. Poison arrow frogs live in the rainforests of Central and South America and on a few Hawaiian Islands.

It is said that poison arrow frogs, also called poison dart frogs, received their name because some Amerindian tribes used their skin secretions to poison their darts. Arrow frogs are not poisonous in captivity. Scientists believe that these frogs gain their poison from specific insects they eat in the wild.

Strawberry dart frogs are one of more than 100 species of poison dart frog. The strawberry dart frog’s reproductive process starts in thick foliage close to the ground, where the female lays about six eggs—each no bigger than a pea—in a moist place after mating. For about the next 10 days, the frogs protect and water the clutch by urinating on it. When the eggs hatch, the female carries each tadpole on her back, one at a time, up the side of a tree in search of a small pool of water, less than a thimble’s worth, where she can deposit them. This can be a tree cavity, but many frogs use pools in bromeliad plants, which often grow high up on trees.

The Smithsonian Conservation Biology Institute is leading a partner project in Panama to save amphibians like these from a disease—chytrid—wiping them out worldwide. Eastern Panama, in particular, represents the last stronghold for amphibian biodiversity. Smithsonian researchers have built an amphibian rescue pod there to safeguard nearly 20 Panamanian frog species in imminent danger of extinction as the wave of chytrid moves through their habitat. You can read more about SCBI’s efforts at http://amphibianrescue.org/about/.

This specimen is one of 137 million artifacts, works of art and specimens in the Smithsonian’s collection. It is on display at the National Zoo’s Amazonia Habitat Exhibit.