Marking the Centennial of Extinction 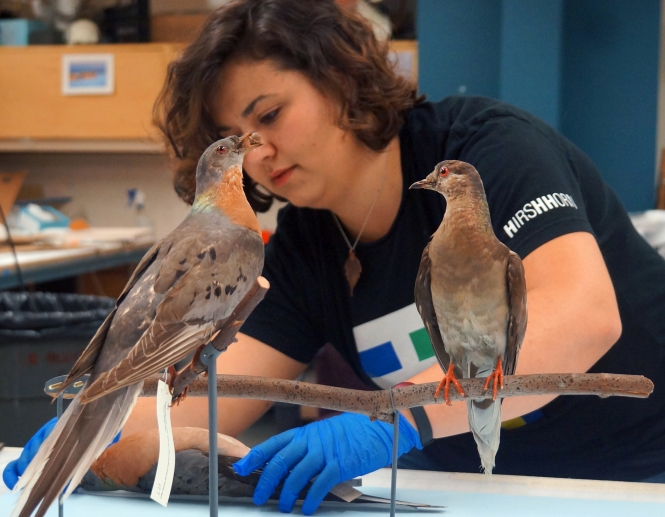 Marking the Centennial of Extinction

This year marks the 100th anniversary of the passenger pigeon’s extinction, when the last individual, named Martha (on the right), died Sept. 1, 1914, at the Cincinnati Zoo. Martha is now at the Smithsonian.

In this photo, Martha and a fellow male passenger pigeon are getting a touch up by exhibits specialist Megan Dettoria before becoming the centerpiece of the new exhibit “Once There Were Billions: Vanished Birds of North America.” The exhibit opens June 24 at the Smithsonian’s National Museum of Natural History in Washington, D.C.

The passenger pigeon, Ectopistes migratorius, was once the most common bird in the United States, numbering between 3 and 5 billion. They lived in enormous colonies, with sometimes up to 100 nests in a single tree. Migrating flocks stretched a mile wide, turning the skies black. There are eyewitness accounts of some flocks taking several days to pass overhead.

However, due to overhunting and habitat loss, they became increasingly rare by the late 19th century. The last confirmed sighting of a wild passenger pigeon was in 1900. After that, only a few survived in captivity, finally leaving Martha to be the very last of her species. She was 29 years old when she died.