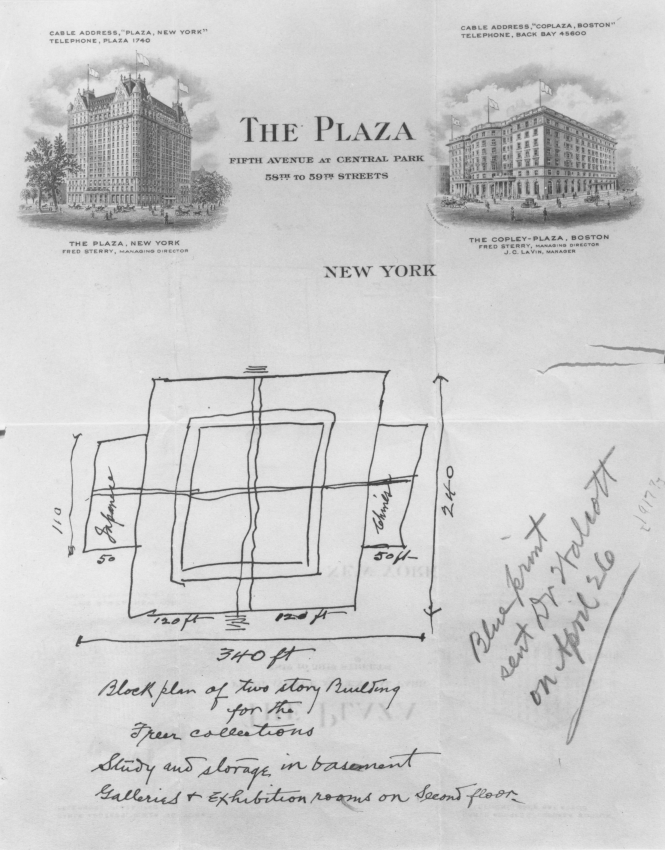 Courtesy of Freer Gallery of Art

The Smithsonian’s first art museum, the Freer Gallery of Art, opened in 1923, but its story began in 1906 when Charles Lang Freer gave his collection of Asian and American art to the United States, a gift he had proposed to President Theodore Roosevelt a year before. By exploring the differences in arts from around the world, the Freer Gallery would unite, in Freer's words, “modern work with masterpieces of certain periods of high civilization harmonious in spiritual suggestion...”

After several years researching museums to determine the best design for his art gallery, Freer decided on a modified version of an Italian renaissance palazzo. In a meeting with architect Charles Platt at the Plaza Hotel in New York City, Freer jotted down his ideas for a classical, well-proportioned building on a piece of hotel stationery. An Italianate structure with a porticoed courtyard would reflect his ideas about art and aesthetics, including scale, proportion, harmony and repose. From the building’s 1923 opening until the 1970s, live peacocks roamed the courtyard, creating, in effect, a living peacock room to rival the museum’s painted masterpiece, “The Peacock Room,” by James McNeill Whistler.