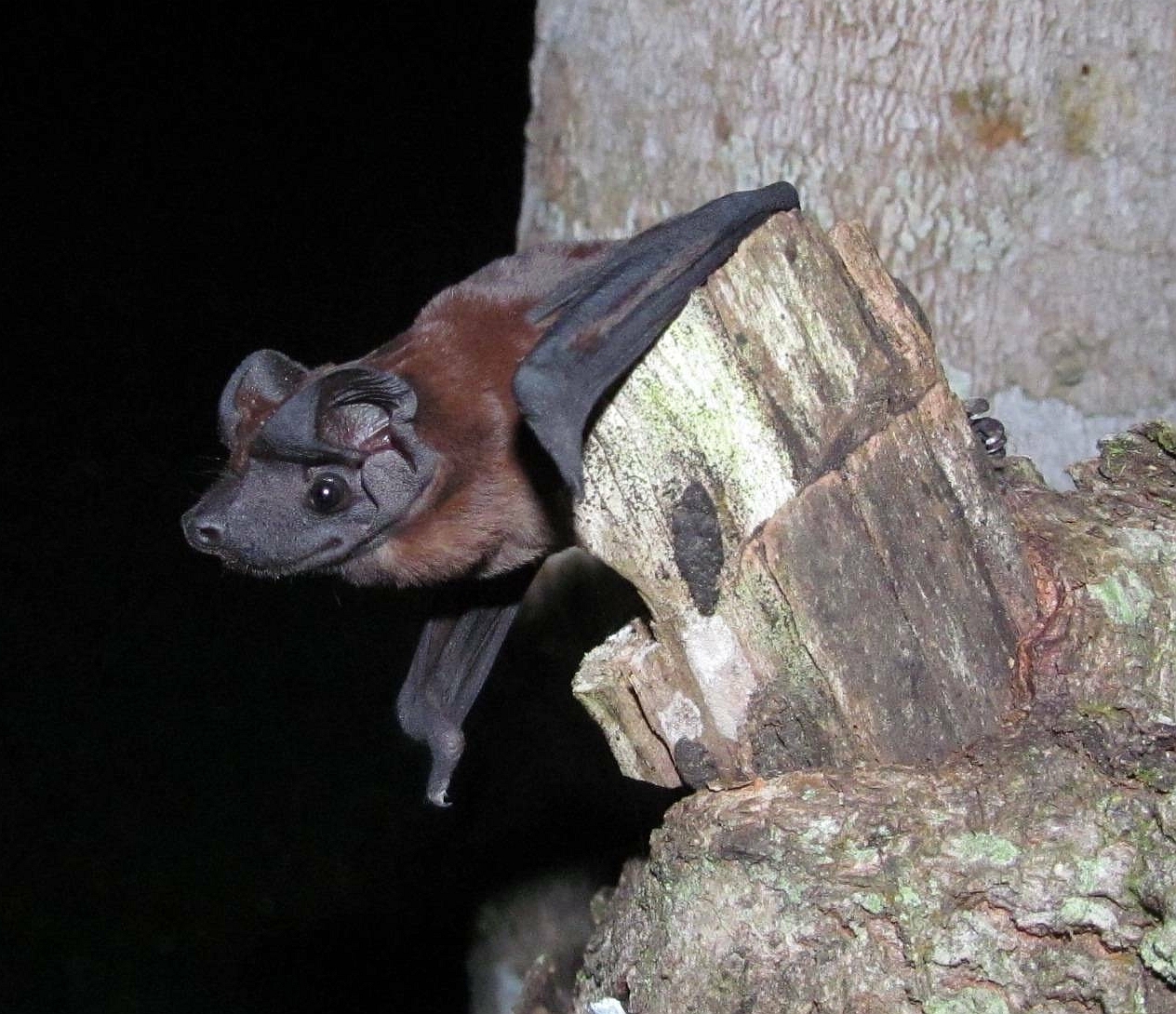 A study in the journal Mammalian Biology describes two new species of dog-faced bats: Freeman’s dog-faced bat, collected by Smithsonian researchers in Panama, and the Waorani dog-faced bat from Ecuador.

“Identifying two mammal species new to science is extremely exciting,” said Ligiane Moras, who did part of this work as a fellow at the Smithsonian’s National Museum of Natural History in Washington, D.C., during her doctoral studies at the Universidade Federal de Minas Gerais, Brazil.

“After characterizing the body shapes of 242 dog-faced bats from museum collections across the Americas and Europe, comparing their DNA and adding in field observations including sound recordings, we consider that there are eight species in this group, two new to science,” Moras said.

Rarely observed because they fly high in the night sky, dog-faced bats also fly much faster than other bats, given their extremely narrow wings. It is unusual to catch these insect-eating bats near the ground in mist nets, which is how bat researchers capture most of the bats they study.

Freeman’s dog-faced bat (Cynomops freemani) was discovered in Gamboa, Panama, by a group of researchers working with staff scientist Rachel Page at the Smithsonian Tropical Research Institute (STRI), including Thomas Sattler, Raúl Rodriguez and Elias Bader who, during five nights in 2012, captured and released 19 males and 37 females near several abandoned wooden buildings. Kristen Jung found another individual that had died and was collected. In August 2017, STRI postdoctoral fellow Gerald Carter and colleagues confirmed the occurrence of this new species in Gamboa. They observed pregnant females in August and young individuals in August and September.

Similar bats, collected by Charles Handley, mammologist at the National Museum of Natural History and previously identified as C. paranus or C. greenhalli, were also included as C. freemani by the authors.

“We were very lucky to catch several different individuals of this species in mist nets and to record their calls,” said Sattler, then a post-doctoral fellow at STRI and the University of Ulm and is now at the Swiss Ornithological Institute. “They were roosting in abandoned buildings. Knowing their species-specific echolocation calls may make it possible to find them again in the future with a bat detector—without catching them—and to find out more about their distribution and habitat preferences.”

The Freeman’s dog-faced bat was named for bat researcher Patricia Freeman who dedicated much of her career to understanding relationships among a group of bats known as the free-tailed bats, which includes the dog-faced bats.

The discovery of the slightly smaller Waorani dog-faced bat (C. tonkigui) is based on individuals collected by the well-known naturalist Fiona Reid and colleagues and by Diego Tirira from the Pontificia Universidad Católica in Ecuador. The name “tonkigui” honors the Waorani tribe of Ecuador that live in the surrounding forest of one of the catching locations. Tonkigui means bat in Waorani.