Titans of the Ice Age 3D Opens at the Smithsonian’s National Museum of Natural History Oct. 25 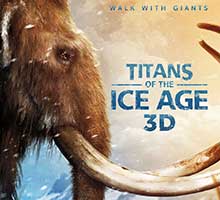 Giant Screen Films’ Titans of the Ice Age will launch in 3-D at the Samuel C. Johnson IMAX Theater at Smithsonian’s National Museum of Natural History Oct. 25. Tickets are on sale now at www.si.edu/imax.

Titans of the Ice Age is an action-packed immersive portal to the great Pleistocene ice age, 20,000 years back in time. Narrated by Academy Award-winning actor Christopher Plummer (The Sound of Music, Up, The Girl with the Dragon Tattoo, The Beginners), Titans of the Ice Age transports viewers to the otherworldly frozen landscapes of the northern hemisphere 10,000 years before modern civilization.

Titans of the Ice Age brings this harsh and beautiful era to life—a world buried in humans’ ancestral memory, populated by saber-toothed cats, giant sloths, dire wolves and the iconic woolly mammoths. The audience will travel across monumental glaciers and sweeping grasslands, rich in life and roam with baby Lyuba, a female woolly mammoth calf recently exposed by the melting Siberian permafrost, now one of the best-preserved mammoth mummies in the world. They will discover the story of Zed, one of the most complete Colombian Mammoth skeletons ever uncovered, extracted in 2008 from under a Los Angeles parking lot next to the famous La Brea Tar Pits, and witness a time when titans ruled untamed continents and humans walked with giants.

As one of the first films shot using ultra-high-definition digital cameras, Titans of the Ice Age is a visual experience new to the giant-screen medium. Backdrops shot on location at Yellowstone National Park, the Northern Great Plains, the Rocky Mountains and Alaska provide the scenery on which the drama of the Pleistocene unfolds. Ultra-HD computer-generated imagery allows long-extinct Ice Age mammals to populate this world in photorealistic detail alongside Paleolithic humans, played by native Iñupiat and Yup’ik Alaskans.

Titans of the Ice Age captivates audiences with a vision of a changing world, a time of new ecological pressures—leading us to consider the possible fates of today’s living mammals. As the climate continues to warm and human encroachment threatens the existence of thousands of species, could the megafauna of this millennia—elephants, bison, tigers—be lost to time like their ice age cousins? Titans of the Ice Age provides a bigger-picture perspective on the relationship between climate, the Earth, its resources and inhabitants, offering a cautionary tale that is more relevant today than ever.

Titans of the Ice Age is a production of Giant Screen Films and D3D Cinema, in association with The Field Museum in Chicago.

Individual tickets for Titans of the Ice Age are on sale now and may be purchased up to two weeks in advance. Groups of 10 or more may reserve tickets now for any date during the film’s expected run. The public may visit any Smithsonian Theaters box office, call (866) 868-7774 or visit www.si.edu/IMAX for information or to purchase tickets.