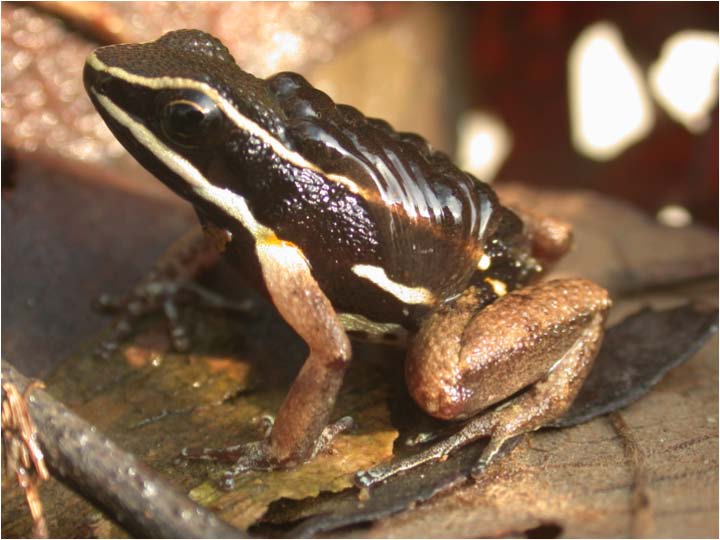 For poison frogs, successfully raising tadpoles is all about location. Allobates femoralis, a terrestrial species with similar behaviors to ancestral poison frogs, lays its eggs in a nest on the ground and then carries its newly hatched offspring to a pool of water where they can grow and mature. A Smithsonian scientist and his colleague from East Carolina University recently discovered that complex predator-prey relationships may have played a role in selecting the ideal habitat for tadpoles and influenced many species of poison frogs to move their progeny from the ground into the trees. In addition, the scientists demonstrated that studying the natural history of modern species can inform the understanding of evolutionary changes in behavior. Their research is published in the July 2013 issue of Evolutionary Ecology.

During the past several decades, scientists have studied the compromises inherent in reproduction strategies, including where and why species select certain areas over others to reproduce and raise their young in. The team conducted an experiment outside of Peru’s Manu National Park that tested the impact of predators and pool size on tadpole deposition. Poison frogs were able to select from large and small pools of water on the ground, each with and without large water bugs, a likely predator of tadpoles. Instead of choosing the large pools without water bugs as the scientists expected, the adult frogs placed their tadpoles in the large pools with the predators.

“It only makes sense in the context of the biodiversity of the whole system,” said Seabird McKeon, a post-doctoral fellow with the Smithsonian’s National Museum of Natural History and the Smithsonian Marine Station at Fort Pierce, Fla. “When you watch small water bodies on the rainforest floor, you see predacious diving beetles, and usually in huge numbers. The number of diving beetles was much lower in pools with water bugs because water bugs eat the beetles. It is an example of ‘the enemy of my enemy is my friend.’”

Further experiments demonstrated that the beetles do not colonize very high off the forest floor, so poison frogs could avoid predation from the beetles altogether by placing their tadpoles in tree holes and phytotelmata (plant-held bodies of water). In fact, this is precisely the kind of behavior that scientists observe in many species of poison frogs today.

Among the more than 40 described reproductive modes found in frogs in the tropics, the poison frog family has some striking adaptations, many of which are likely the result of moving from the ground and into the trees. McKeon and his colleague, Kyle Summers, plan to continue studying the role of ecology in evolutionary transitions, and improve the understanding of species dynamics.