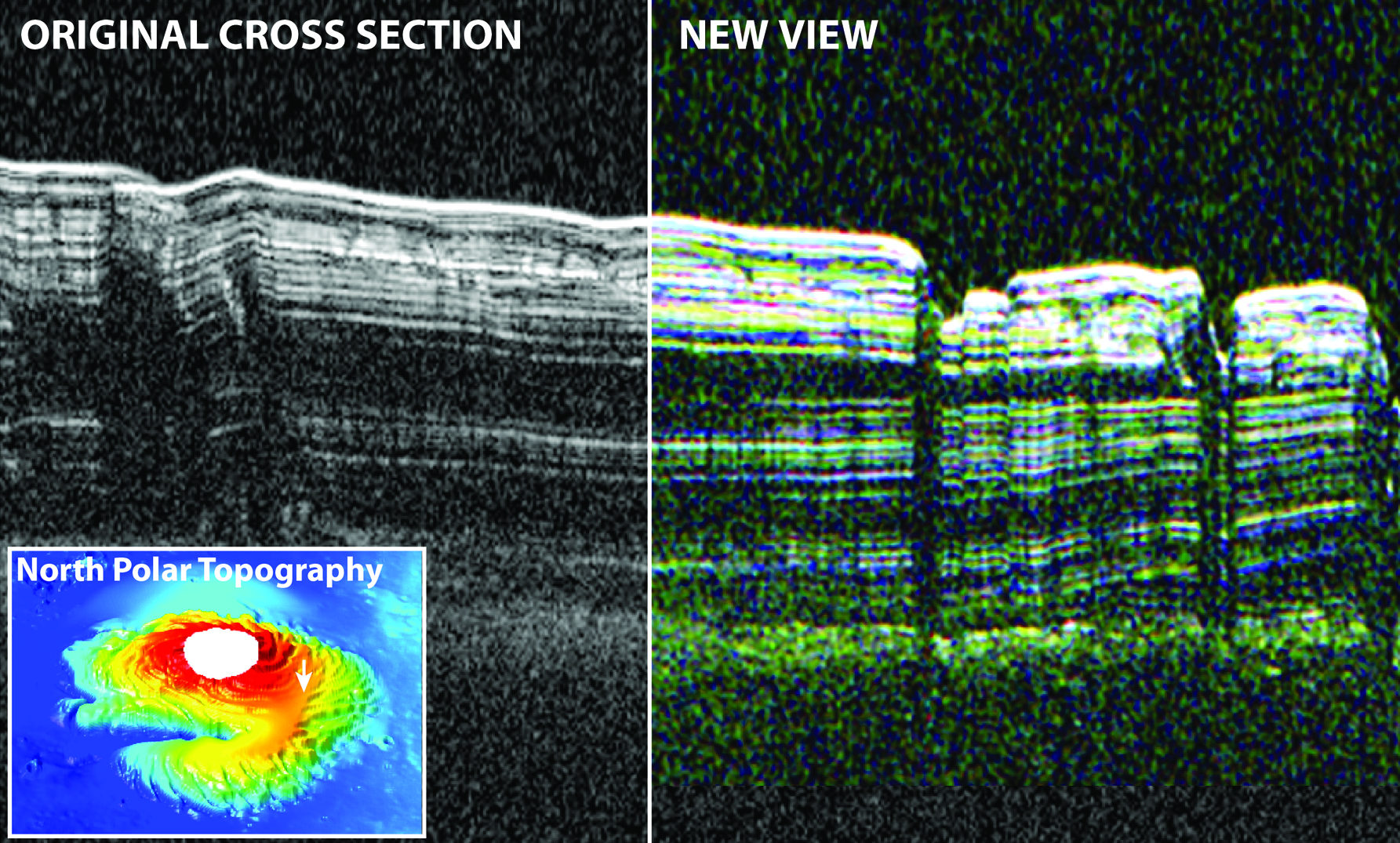 Smithsonian scientist Bruce Campbell and the Planetary Science Institute’s Gareth Morgan have developed a new approach that uses different wavelengths of radio waves to better understand layers of ice in polar and non-polar regions of Mars. This new method for measuring ice properties provides a better understanding of the planet’s climate history and more accurately assesses resources for future exploration. Their work is published in Geophysical Research Letters at http://onlinelibrary.wiley.com/doi/10.1002/2017GL075844/full.

The Shallow Radar (SHARAD) instrument on the Mars Reconnaissance Orbiter measures reflected signals from up to several kilometers beneath the surface, mapping water ice and dusty layers within the polar caps built up over millions of years. SHARAD has also found glaciers and other possible ice-rich areas closer to the equator. Campbell and Morgan’s new method splits the shorter and longer radar wavelengths used by SHARAD and measures how they are absorbed by different deposits on Mars. Previously, these reflections had only been mapped as bright and dark features in the cross-sectional views provided by the radar. The results of the new approach can be presented as a false-color image of the radar wavelengths that reveals patterns linked to the thickness of layers and, most significantly, the overall ice content of a deposit. The new method confirms that many features that appear similar to glaciers on Earth are dominated by ice over their full depth, while other areas may have much thinner layers of ice.

These findings offer new clues as to how the climate on Mars has changed over time and where water ice is present today. As a result, scientists will be better equipped to identify optimal locations for future human and robotic exploration of the Red Planet.

The SHARAD instrument was provided to NASA’s MRO mission by the Italian Space Agency (ASI), and its operations are led by the DIET Department, University of Rome ‘’La Sapienza” under an ASI contract.

The National Air and Space Museum’s Steven F. Udvar-Hazy Center is located in Chantilly, Va., near Washington Dulles International Airport. The museum building on the National Mall in Washington, D.C., is located at Sixth Street and Independence Avenue S.W. Both facilities are open daily from 10 a.m. until 5:30 p.m. (closed Dec. 25). Admission is free, but there is a $15 fee for parking before 4 p.m. at the Udvar-Hazy Center.