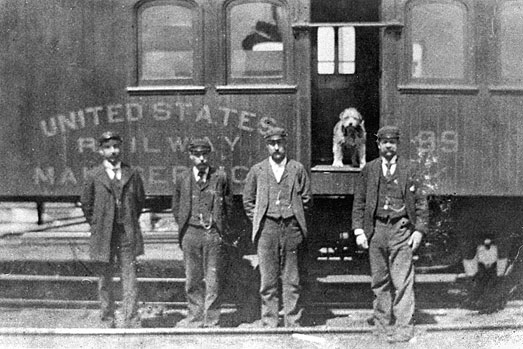 In the last decade of the 19th century, one of the world’s most famous travelers was a dog. At a time when mass communication sped at the rate of a train, a mongrel pup gained fame for riding the rails with the mail. The dog, Owney, is the centerpiece of an exhibit renovation at the National Postal Museum. The new exhibit, “Owney: Mascot of the Railway Mail Service,” opens today and features this extraordinary dog and his story. The museum and its visitors will be joined in that celebration by the U.S. Postal Service, which is issuing a commemorative postage stamp in the dog’s honor at an event in the museum’s atrium.

When Owney died in 1897, mail clerks raised money to preserve their beloved mascot. Now a taxidermy specimen, Owney was sent to the Post Office Department’s building in Washington, D.C., and was transferred to the Smithsonian Institution in 1911. Owney has been on display for most of the past 100 years, 17 at the National Postal Museum. Owney is an old dog—and it showed. The museum’s preservation office recently provided Owney with a 21st-century “extreme makeover” befitting of a treasured Smithsonian artifact. Owney collected more than 400 tags during his travels, many of which also received conservation treatment, along with the original collar and harness he wore to display them.

Also on display through the spring of 2012 is Bill Bond’s original painting of Owney that was produced for the stamp. This new exhibit, “Art of the Stamp: Owney the Postal Dog,” also showcases six sketches illustrating various poses of Owney that the artist created as he developed his final portrait. Five tags that were given to Owney on his many travels and selected by Bonds as background for his stamp art are included.

Dog owners and lovers across America are joining in the celebration of Owney’s new postage stamp. The museum, in partnership with the Washington Humane Society, is supporting those celebrations by launching an Owney Look-Alike Contest on the museum’s Facebook page to identify the three dogs that best reflect the spirit of Owney. The winners will receive prizes and have their photos displayed in the museum.

The museum is hosting four days of family-friendly Owney activities today through Saturday, July 30. From 11 a.m. to 3 p.m. each day, visitors can make a tag for Owney, track Owney’s travels on a map, sort mail in the Railway Post Office, make a topical stamp collection, participate in a scavenger hunt and meet the author of a popular Owney book.

The National Postal Museum is devoted to presenting the colorful and engaging history of the nation’s mail service and showcasing one of the largest and most comprehensive collections of stamps and philatelic material in the world. It is located at 2 Massachusetts Avenue N.E., Washington, D.C., across from Union Station. The museum is open daily from 10 a.m. to 5:30 p.m. (closed Dec. 25). For more information about the Smithsonian, please call (202) 633-1000 or visit the museum website at www.postalmuseum.si.edu.