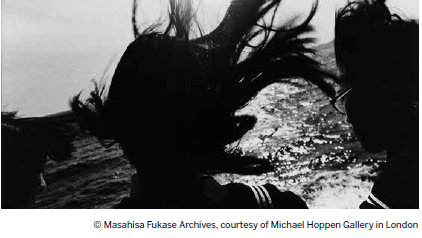 “Japan Modern: Photographs from the Gloria Katz and Willard Huyck Collection” and “Japan Modern: Prints in the Age of Photography” will be on view at the Smithsonian’s Arthur M. Sackler Gallery Sept. 29 through Jan. 21, 2019. The Smithsonian’s Freer|Sackler explores Japanese artists’ responses to modernity with these two exhibitions, one focused on prints and the other on photography. Both look at how artists sought to understand a changing Japan through their work.

After Japan opened its doors to the modern world in the mid-19th century, traditions such as woodblock printing collapsed while new technologies such as photography entered the arts scene. Photographers used the camera to capture an ever-changing view of Japan while the printmakers responded to technology by adapting their style and subject matter. Both exhibitions focus primarily on the 20th century, each illuminating how the artists interpreted the shifting Japanese landscape.

“Japan Modern: Photography from the Gloria Katz and Willard Huyck Collection” celebrates the significant new acquisition of more than 400 photographs, expanding the Freer|Sackler’s collection of modern and contemporary Japanese works on paper and enhancing the museums’ ability to provide a rich context for understanding Japanese art over the past three centuries. The exhibition highlights masterworks from a selection of groundbreaking 20th-century photographers.

“Photographers sought to grasp a sense of self and place in the midst of economic, social and physical transformation occurring throughout Japan,” said Carol Huh, Freer|Sackler associate curator of Contemporary Asian Art. “This exhibition presents nearly 80 works that highlight seminal moments in the development of 20th-century Japanese photography.”

As photography became more accessible at the beginning of the 20th century, interest in the medium grew. Practitioners focused on composition and tonality, adopting a pictorialist style popular among American and European contemporaries. Artists began to experiment with light exposure, the enlargement process and types of pigments and papers. Many of the photographs from this time feature landscape views and offer soft, often nostalgic scenes of a changing environment.

After World War II, photojournalism and a documentary approach to photography predominated. Stark images of children and military-base towns show a changed Japan deeply affected by a continued U.S. military presence. In contrast, photographers like Ueda Shoji (1913–2000) operated outside of the popular photographic movements of their time. A few works exemplify his unique combination of landscape and fantasy in compositions inspired by European surrealism. By the 1950s, photobooks became an integral means for photographers to present their work. The exhibition also features four renowned photobooks, from Ueda’s Warabegoyomi (Children the Year Around) to a volume of the groundbreaking Provoke magazine.

Numerous photographers traveled throughout Japan, such as Hamaya Hiroshi (1915–99) who observed rural areas in the search for a Japan outside the modernizing cities. Others took deeply personal approaches to documentary photography, including Hosoe Eikoh in his return to his birthplace in the north and Fukase Masahisa (1934–2012) who spent almost a decade photographing ravens after experiencing his own personal trauma. Meanwhile, Moriyama Daido (b. 1938), inspired by Jack Kerouac’s novelization of America’s postwar counterculture in On the Road, roamed Japan’s highways beginning in the late 1960s to document his encounters with the world surrounding him. These are just a few examples of the more than 12 photographers featured in the exhibition. Whether along the country’s rural edges or on the bustling streets of Tokyo, Japanese photographers captured views of a country in flux and rigorously experimented with the conventions of documentary photography.

Complementing the photography exhibition, “Japan Modern: Prints in the Age of Photography,” traces Japan’s response to modernity through woodblock prints. During the Edo period (1615–1868), traditional printmaking was prominent throughout Japan. However, with the rise of photography in the late 19th century, there was a new inexpensive way to document life and place in Japan, and printmakers had to adapt and reinvent the medium in order to save their art from oblivion.

The exhibition explores the collapse of the traditional print industry and traces its resurrection as printmakers recorded scenes of their changing country in increasingly innovative ways. Two distinct print styles emerged—the neo-romantic “new print” movement and the “creative print” neo-abstraction movement. Although fundamentally opposite, these new styles employed rural and urban landscape views to convey attitudes toward modernity in Japan.

Photographs exhibited in “Japan Modern” are a partial gift from Gloria Katz and Willard Huyck and purchased through the Freer|Sackler acquisitions fund in honor of Julian Raby, director emeritus of the Freer|Sackler.

About the Freer|Sackler Japan Program

The Freer|Sackler’s Japan Program is the first and largest interdisciplinary program outside of Japan focused on Japanese art, film and culture. It is devoted to researching, exhibiting, publishing and promoting the arts and culture of Japan from pre-history to the present, nationally and internationally. The museums’ collections of more than 12,000 objects from Japan span four millennia and include paintings, ceramics, metalwork, sculpture, lacquer and modern and contemporary photography and graphic arts. Led by Senior Curator of Japanese Art James Ulak, the program is supported by an additional curator, the curator of contemporary Asian art and two conservators who are Japanese specialists, library staff and a curator of films who presents a robust series of Japanese films.