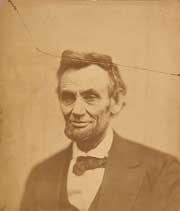 Considered America’s first modern photographer, just as the Civil War is considered the first modern war, Alexander Gardner created dramatic and vivid photographs of battlefields and played a crucial role in the transformation of American culture by injecting a sobering note of realism to American photography.

“Gardner’s photographs showed how the new medium and art form could develop to meet the challenges of modern society,” said Kim Sajet, director of the Portrait Gallery. “These are a record of the sacrifice and loss that occurred in the great national struggle over the Union.”

“Our photograph of Lincoln by him, known as the ‘cracked-plate,’ is the museum’s ‘Mona Lisa.’”

The first section of the exhibition will highlight Gardner’s Civil War photographs, and his role as President Abraham Lincoln’s preferred photographer. Gardner photographed the president many times, recording the impact of the war on his face. Among these images is the “cracked-plate” portrait, a photograph that is arguably the most iconic image of Lincoln. In addition, the exhibition will encompass Gardner’s portraits of other prominent statesmen and generals, as well as private citizens.

Also in the exhibition are Gardner’s landscapes of the American West and portraits of American Indians. These document the course of American expansion as postwar settlers moved westward, challenged by geography and Indian tribes resistant to losing their ancestral homelands. Gardner’s landscapes are evocative studies of almost limitless horizons, giving a sense of the emptiness of western space. These are contrasted with his detailed portraits of Indian chiefs and tribal delegations.

Curated by David C. Ward, Portrait Gallery senior historian, and guest curator Heather Shannon, former photo archivist at the Smithsonian’s National Museum of the American Indian, with research assistance from Sarah Campbell, this exhibition will feature more than 140 objects, including photographs, prints and books. The exhibition will be the finale of the Portrait Gallery’s seven-part series commemorating the 150th anniversary of the Civil War.

In connection with this exhibition, the Portrait Gallery will present artist Martha McDonald Saturday, Oct. 17, as part of the first-ever performance-art series at the museum—“Identify.” McDonald in “Hospital Hymn: Elegy for Lost Soldiers” will create a portrait of the National Historic Landmark building, which served as a hospital for wounded soldiers during the Civil War. The artist is known for her work featuring handcrafted costumes, and objects are vitalized by her singing, making and ultimately undoing her handwork.

“Dark Fields of the Republic: Alexander Gardner Photographs, 1859–1872” is funded by members of the exhibition’s leadership committee. The co-chairs for this philanthropic committee are gratefully acknowledged: The Abraham and Virginia Weiss Charitable Trust, Amy and Marc Meadows, in honor of Wendy Wick Reaves; The Stoneridge Fund of Amy and Marc Meadows; The Abraham Lincoln Bicentennial Foundation; Peter and Rhondda Grant; Mr. and Mrs. Robert Uhler; and Kate Kelly and George Schweitzer.