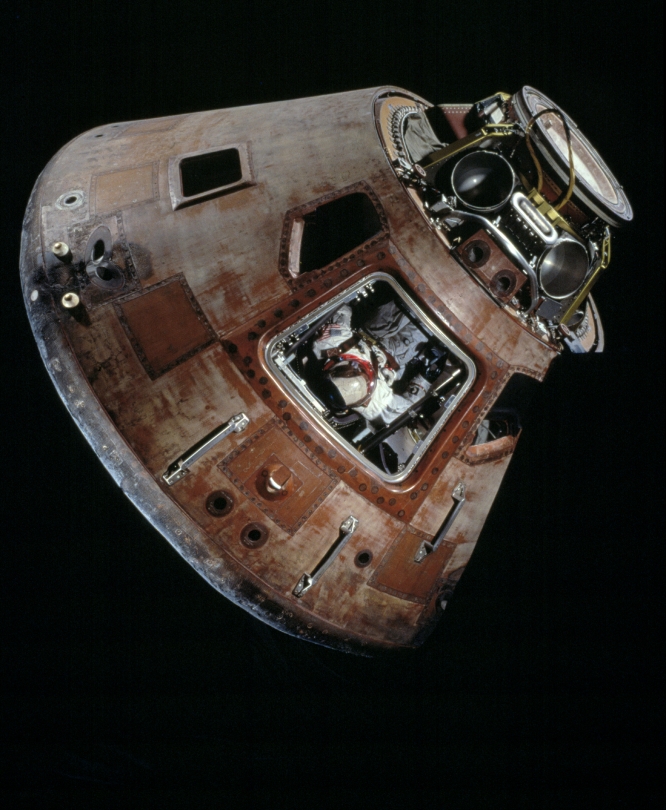 To mark the 47th anniversary of the Apollo 11 moon-landing mission, the Smithsonian has made available a high-resolution 3-D scan of the command module “Columbia,” the spacecraft that carried astronauts Neil Armstrong, Edwin “Buzz” Aldrin and Michael Collins to the moon. This highly detailed model, available at 3d.si.edu, allows anyone with an internet connection to explore the entire craft including its intricate interior, which is not possible when viewing the artifact in the Smithsonian’s National Air and Space Museum. The Smithsonian is also making the data file of the model available for download so it can be 3-D printed or viewed with virtual-reality goggles.

The 3-D scanning process for the command module was extremely challenging. The module is composed of reflective surfaces that 3-D capture devices do not read well. Its interior dashboards are made up of many components that are delicate and intricate, which also presents a challenge for many 3-D capture devices. Because of the complicated nature of this scan, the Smithsonian 3-D team worked with its technology partner, Autodesk Inc., a leader in cloud-based 3-D design and engineering software.

Autodesk developed custom 3-D scanning equipment for the project, invented algorithms for integrating multi-sensor scan data, developed software for processing the massive data set and generated a master 3-D model of the command module.  As one of the most sophisticated scans ever made of a historic artifact, it employed seven different scanning technologies to capture nearly 1 trillion high-resolution measurements producing more than a terabyte of compressed data resulting in a highly detailed master model. Autodesk also produced animations, virtual-reality panoramas, and a unique in-browser viewing platform so Smithsonian curators can publish interpretive and interactive 3-D experiences of the command module for the public.

The scanning enabled the curatorial and collections team to get glimpses of the interior of the command module they had not seen. Protective covering over the hatch opening of the Command Module has only been removed a handful of times since the artifact came into the collection in 1971.

During the scanning, curators rediscovered a number of instances of “astronaut graffiti” not previously known to the museum. Some of the markings include numbers and information relayed from mission control written on walls or instrument panels. There also is a hand-drawn calendar by one of the astronauts, with each day crossed out except for landing day. Seeing such details and studying the text have enhanced curators’ understanding of how the missions were conducted. Now details like these markings are available in the 3-D model. The 3-D model will also be featured in the upcoming exhibition “Destination Moon,” slated for opening at the National Air and Space Museum in 2020.

The museum is commemorating the anniversary of the moon landing by displaying Armstrong’s Apollo 11 Lunar Exploration gloves and helmet at the Steven F. Udvar Hazy Center in Chantilly, Va. They will be on view for one year, starting July 20. The Smithsonian launched its 3-D scanning and imaging program in 2013 to make museum collections and scientific specimens more widely available for use and study.

The Smithsonian 3-D Collection features objects from the Smithsonian that highlight different applications of 3-D capture and printing, as well as digital delivery methods for 3-D data in research, education and conservation. Objects include the Wright Flyer, a model of the remnants of supernova Cassiopeia A, a fossil whale and a sixth-century Buddha statue. The public can explore all these objects online at 3d.si.edu, a free custom-built, plug-in-free browser and download the data for their own use in modeling programs or to print using a 3-D printer.