Smithsonian, Library of Congress and National Archives Are Counting Down to the Suffrage Centennial With #19SuffrageStories 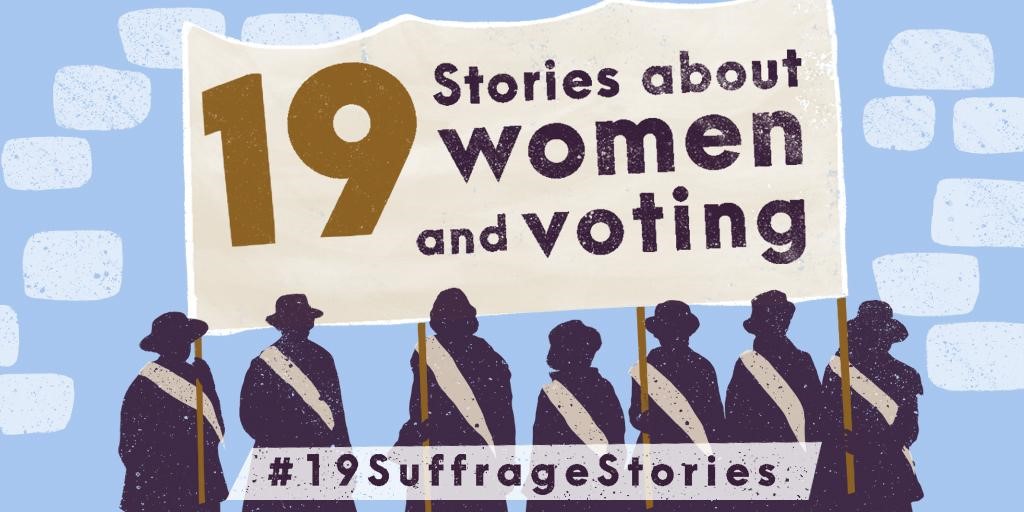 The Smithsonian, Library of Congress and the National Archives have launched #19SuffrageStories, a 19-day social media campaign that will share stories about the long fight for women’s voting rights in the U.S. Every weekday from Aug. 3­ to Aug. 26, the three institutions will share one of 19 stories related to women’s suffrage, counting down to Women’s Equality Day Aug. 26. The institutions have also released a set of social media stickers and GIFs to encourage the public to join the conversation.

On Aug. 26, 1920, the 19th Amendment to the Constitution was enacted, declaring that the right to vote shall not be denied on account of sex. However, for many women, especially women of color, the fight for the right to vote continued long after the amendment became law. The stories of the diverse communities and organizations that fought for equal voting rights are not shared widely today. To mark the centennial of the 19th Amendment, these three leading cultural institutions are joining forces to share lesser-known stories about the fight for women’s suffrage. Using items from their collections, they will share stories spanning from the Seneca Falls Convention in 1848 through events in the 1960s to provide a broad look into the history of women and voting.

Additional information about the stories shared each day will be available on the Smithsonian American Women’s History Initiative blog and the Library of Congress and National Archives websites.

To coincide with the campaign, the organizations are also releasing a set of 10 voting-inspired social media stickers and GIFs. Instagram users can add a historic sash sticker to their selfies or add the words of suffragists Ida B. Wells, Marie Louise Bottineau Baldwin and Mabel Ping-Hua Lee to their posts. To add the stickers on Instagram, users can create an Instagram Story, click on the sticker icon and search for #19SuffrageStories. Animated GIFs of the stickers are also available through GIPHY for use on Twitter or other social media platforms. The full set of GIFs can be found online, and descriptions of the stickers can be found in this blog post about the #19SuffrageStories campaign.

The three institutions are also collaborating in August on a 19th Amendment virtual Wikipedia Edit-a-thon. The public is invited to make 19 edits to Wikipedia pages throughout the month of August to help expand the coverage of the women’s suffrage movement online. Virtual trainings will be held every Tuesday and Thursday in August, 11:30 a.m.–1 p.m. ET. The public can register for the trainings on Eventbrite, no experience required.

The Smithsonian, Library of Congress and the National Archives remain largely closed to the public due to the coronavirus (the Smithsonian’s National Zoo and Steven F. Udvar Hazy Center reopened July 24). More information about the operating status of these organizations is available on their respective websites.

Since its founding in 1846, the Smithsonian Institution has been committed to inspiring generations through knowledge and discovery. It is the world’s largest museum, education and research complex, consisting of 19 museums, the National Zoological Park, education centers, research facilities, cultural centers and libraries. There are more than 6,300 Smithsonian employees and 6,900 volunteers. There were more than 22 million visits to the Smithsonian in 2019. The total number of objects, works of art and specimens at the Smithsonian is estimated at nearly 155 million, of which nearly 146 million are scientific specimens at the National Museum of Natural History.

The National Archives is an independent federal agency that serves American democracy by safeguarding and preserving the records of our government, so people can discover, use and learn from this documentary heritage. The National Archives ensures continuing access to the essential documentation of the rights of American citizens and the actions of their government. From the Declaration of Independence to accounts of ordinary Americans, the holdings of the National Archives directly touch the lives of millions of people. These holdings include the original 19th Amendment and extensive documentation of the struggle for Women’s Suffrage.