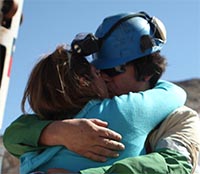 The extraordinary rescue in October 2010 of 33 miners trapped for more than two months after a partial collapse of the San José Mine in Chile is revisited in “Against All Odds: Rescue at the Chilean Mine,” a multimedia exhibition opening at the National Museum of Natural History Aug. 5—one year to the day after the miners were trapped. The exhibition recounts the historic event in English and Spanish. Objects on display include a Fénix 1 steel rescue capsule used for testing in the shaft before the rescue, personal mementos and stories from the miners, new video footage and rare rock samples from the mine. The exhibition was produced by the Smithsonian in collaboration with the Chilean government and the miners (“Los Trienta Y Tres”).

“The mine collapse that trapped men in Chile’s San José Mine, Aug. 5, 2010, set the stage for one of the most extraordinary rescue missions in history of humankind—a triumph of technology and science, sustained by the endurance of the human spirit,” said Cristián Samper, director of the museum. “This exhibition not only depicts the remarkable efforts that brought the miners to safety, but with the help of Smithsonian science, it provides a window into the harsh yet fascinating geological world that exists beneath the Earth’s surface.”

The exhibition focuses on the geology of the Andes Mountains region where the San José Mine is located, why the miners were there, how the mine collapsed and how the miners survived in the hot, dark, corkscrew mineshaft for 69 days. The exhibition culminates with the heroic rescue, including a display of the capsule and one of the large drill bits used to reach the miners nearly half a mile underground.

“Against All Odds” illustrates the enormous challenges that confronted the government, the anxious waiting and work of the rescuers and the families during a seemingly endless ordeal. Everyday objects and multimedia document a group who never lost hope the miners would be found alive and safely rescued. Chile led an international team that accomplished a rescue of unprecedented scale and scope. The world not only watched the rescue but contributed to it. Workers and drilling equipment came from the U.S., Canada and other nations; the National Aeronautics and Space Administration consulted on the effects of long-term isolation and rescue-capsule design; and an Israeli company even sent antifungal socks for miners to wear in the steamy environment.
The exhibition is located in the Janet Annenberg Hooker Hall of Geology, Gems and Minerals, a display on the Earth’s geology, featuring nearly 3,500 gems, minerals, rocks and meteorites from the Smithsonian’s unparalleled research collections.

Huge stores of copper and other valuable metals are found along the ridges and foothills of Chile’s Andes Mountains. A number of specimens from the deposits near the San Jose Mine will be on display in the exhibition.

“Chile not only leads the world in copper production, but copper is essential to its economy,” said Sorena Sorensen, research geologist at the National Museum of Natural History and curator of the exhibition. “In these deep places of Earth, the potential for prosperity and the risk of tragedy balance on a knife’s edge. Sometimes, such as last summer, triumph occurs against all odds. And fundamentally, that’s what this exhibit is all about.”

“Against All Odds” will include educational programs, tours, lectures and a feature-length documentary produced by the Smithsonian Channel premiering in conjunction with the one-year anniversary of the rescue, Oct. 13. More information is available at www.smithsonianchannel.com.

The exhibition was developed with the Republic of Chile through its embassy in the United States. It was made possible by the generous support of the lead sponsors, Caterpillar Foundation, Caterpillar Global Mining and Finning Chile S.A. Additional support was provided by Layne Christensen Co., as well as 3M, the Chilean American Chamber of Commerce, FedEx Express, Freeport-McMoRan Copper & Gold Inc. and Motorola Solutions Foundation. The U.S. Department of State provided invaluable support for the exhibition.