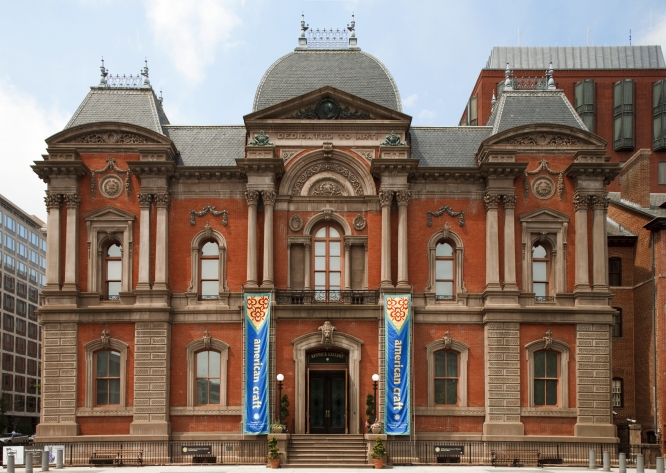 The Renwick Gallery, home to the Smithsonian American Art Museum’s craft and decorative arts program, will reopen to the public Friday, Nov. 13, following a comprehensive two-year renovation. The museum, located across from the White House at the corner of 17th Street and Pennsylvania Avenue N.W. in downtown Washington, D.C., will reopen with carefully restored historic features and entirely new infrastructure. LED lighting throughout the public spaces and other upgrades will dramatically improve energy efficiency. The opening exhibition titled “Wonder” will feature original gallery-sized installations by nine major contemporary artists, renewing the commitment inscribed in stone above the front door, “Dedicated to Art.” The reopening will be accompanied by a celebratory weekend of public programs and three special publications.

This project marks the first comprehensive renovation to the building in 45 years. Westlake Reed Leskosky is the lead architectural design and engineering firm, and Consigli Construction Co. Inc. is the general construction contractor. Both firms are recognized leaders in working with museums and historic buildings.

The Renwick Gallery, built in 1859, was the first structure in America created expressly for showcasing great works of art to the public; the original legislation states that the building is intended to “encourage American genius.” In keeping with this purpose, the Smithsonian American Art Museum has used the building since 1972 to present a program of traditional and modern crafts, decorative arts and architectural design. The focus has strongly emphasized contemporary artists’ work, and contemporary expressions will continue to inspire the collections, installations and public events presented there.

“The Renwick Gallery is the first purpose-built art museum in America and an architectural masterpiece; we are delighted to renew this great historic building for the next half-century,” said Betsy Broun, The Margaret and Terry Stent Director of the Smithsonian American Art Museum.

“James Renwick, Jr., the original architect, took inspiration from the new pavilions of the Louvre in

Paris. When the building first opened a decade after the Civil War to display William Wilson Corcoran’s art collection, it was hailed as the ‘American Louvre,’ symbolizing the young nation’s aspirations for a distinctive culture.”

The renovation of this National Historic Landmark has revealed two long-concealed ceiling vaults on the second floor, restored the original 19th-century window configuration throughout, and repaired original moldings and other decorative features. In addition to upgraded art-storage areas, exterior brick repointing and stucco repair, infrastructure was replaced or upgraded, including all heating, air conditioning, electrical, plumbing and fire-suppression systems, as well as elevator, security, phone and data-communication systems.

Public spaces are now illuminated entirely with LED lighting; museum staff has worked with the lighting industry since 2012 to develop brighter, more precise LED lights specifically for the Renwick that equal or exceed the aesthetics of halogen and incandescent lighting used in most museums. The new lighting system is a landmark advance in museum energy efficiency and, combined with other infrastructure improvements, will reduce the building’s energy usage by 70 percent and significantly shrink the building’s environmental footprint.

The elegant “Octagon Room,” which was personally designed by Corcoran to feature his favorite sculpture, Hiram Powers’ “Greek Slave,” will present during the inaugural year a summary history of the building, including photographs and information about Corcoran, Renwick, the use of the building during the Civil War, the demolition threat in the 1960s and the building’s rescue by First Lady Jackie Kennedy, and the building’s transfer to the Smithsonian to return it to its original purpose as an art museum. A full-size 3-D print of the “Greek Slave,” recently made from a scan of the original plaster in the Smithsonian American Art Museum’s collection, will recall the sculpture’s original placement.

A dramatic new carpet for the Grand Stair, designed by French architect Odile Decq in her signature red color, re-establishes the French influence in the building; the carpet appears to flow down the imposing 10-foot-wide staircase and pool in the lobby near the entrance. LED up-lighting of the ceiling coves and touches of gilding on decorative moldings further enhance public circulation areas.

Just before closing for renovation, the Renwick organized the exhibition “40 under 40,” highlighting new directions by young artists. Many of the exhibition artworks were acquired for the permanent collection and will be included in a new collections installation in summer 2016 by Nora Atkinson, the Lloyd Herman Curator of Craft. The installation is supported by the Henry Luce Foundation and the Windgate Charitable Foundation.

A series of public programs will celebrate the reopening. On Friday, Nov. 13, a morning ribbon-cutting ceremony will precede a free open house offering the opportunity for the public to explore the galleries, meet curators Bell and Atkinson, and take tours led by museum docents. On the evening of the 13th the Renwick’s famed DIY program, “Handi-hour,” returns to the gallery with a large-scale version of this acclaimed program; the Gallery will remain open after hours for “all you can craft,” craft beer, live music and special guest artists on site. This event will be ticketed and available for ages 21 and up. On Saturday, Nov. 14, the Renwick will offer a free family festival with craft activities, artist demonstrations, musical performances and special museum tours. Details will be available on the museum’s calendar, americanart.si.edu/calendar, this fall.

Three new publications will accompany the reopening. American Louvre, A History of the Renwick Gallery Building, by Charles Robertson, will trace the building’s history and explore its architectural innovations. Craft for a Modern World, The Renwick Gallery Collection, by Nora Atkinson, focuses on the permanent collections of craft and decorative arts. On Wonder, by Nicholas Bell, accompanies the debut exhibition of nine installation artists. All will be available for purchase in the museum’s store, through the museum’s online shop and in bookstores nationwide.

Funding for the $30 million renovation was a 50-50 public-private partnership. The renovation was supported in part by a Save America’s Treasures grant administered by the National Park Service, Department of the Interior. With matching support from generous federal appropriations, the museum raised renovation funds from new and longtime supporters. David M. Rubenstein, known for underwriting restoration of several of Washington’s historic monuments, is the lead sponsor for the renovation. Other public areas and galleries recognize Nancy Brown Negley, the Robert H. Smith Family Foundation, the Bresler Foundation Inc., Debbie Frank Petersen, Hacker and Kitty Caldwell, Sheila Duignan and Mike Wilkins, the Ted Slavin Family, the James Renwick Alliance and Wendy and Jerry H. Labowitz, among others. In all, 33 individuals and organizations gave $100,000 or more to the project.

History of the Renwick Gallery Building

The Renwick Gallery is one of the most elegant examples of Second Empire architecture in the U.S., characterized by prominent center and corner pavilions, double columns on the façade, and a high mansard roof with ornamental metal cresting. The building was designed in 1859 by the distinguished architect James Renwick Jr., who also designed the Smithsonian “Castle” and St. Patrick’s Cathedral in New York City. The Renwick Gallery is the third-oldest Smithsonian building. Renwick was inspired by the Louvre’s Tuileries addition in Paris and modeled the gallery in this new ornate French style, which was considered at the time to be the height of modern urban elegance and especially suitable for an art museum. The Renwick Gallery was built to be a public museum displaying William Wilson Corcoran’s private art collection; before the Corcoran Gallery of Art could open to the public, however, the Civil War intervened and the building was taken over by the federal government to aid the war effort. It was returned to Corcoran in 1869, who secured an Act of Congress to charter the public museum and establish a board of trustees to own and manage the building. The Corcoran Gallery opened in 1874 and continued in the building until 1897. When Corcoran’s collection outgrew the space, the building was again taken into federal service as home to the U.S. Court of Claims.

By the 1950s, the building had become shabby and, in 1962, was marked for demolition to make way for a glass office tower. First Lady Jackie Kennedy intervened to lead a successful campaign to save the Renwick Gallery as part of her plan to restore Lafayette Square. Dillon Ripley, then secretary of the Smithsonian, persuaded President Lyndon Johnson to offer the building to the Smithsonian in 1965, reasoning that the Smithsonian would be a good steward of the historic structure and would return it to its original purpose “for use as a gallery of art, crafts and design.” The Renwick was then renovated; in 1969, it was added to the National Register of Historic Places, and, in 1971, it was designated a National Historic Landmark in the Lafayette Square Historic District. The building was renamed for its architect and opened as a branch museum of the Smithsonian American Art Museum in 1972. The Renwick Gallery is located steps from the White House in the heart of historic federal Washington.

About the Renwick Gallery

The Renwick is now again rededicated to the future of art and to American genius, reopening for the third time in three different centuries (1874, 1972, 2015). It continues as the branch museum of the Smithsonian American Art Museum, featuring craft and decorative art and a wide range of materials-based art, with special emphasis on contemporary expression. The Renwick Gallery is located on Pennsylvania Avenue at 17th Street N.W. It is open daily from 10 a.m. to 5:30 p.m., (closed Dec. 25). Admission is free. Metrorail station: Farragut North (Red line) and Farragut West (Blue and orange lines). Follow the museum on Twitter, YouTube, Tumblr, Instagram, Facebook, Flickr, Pinterest, iTunes U and ArtBabble. Museum information (recorded): (202) 633-7970. Smithsonian information: (202) 633-1000. Website: americanart.si.edu.

Note to editors: Selected high-resolution images of the Renwick Gallery may be downloaded from americanart.si.edu/pr. Email americanartpressoffice@si.edu for the password.