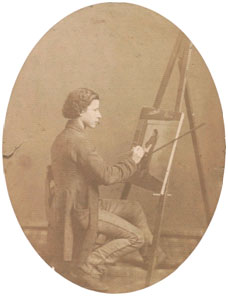 The Smithsonian’s Archives of American Art presents “Henry Mosler’s Civil War Diary,” a digital exhibition at http://civilwardiary.aaa.si.edu launched in recognition of the sesquicentennial of Mosler’s diary. Mosler (1841-1920) was a painter and illustrator who worked primarily in Ohio, Kentucky, New York City and Europe. Mosler began his career during the Civil War when he served as an artist correspondent for Harper’s Weekly.

“As we mark the 150th anniversary of the U.S. Civil War, we turn to this diary to understand how an ‘embedded’ artist experienced the war from day to day,” said Kelly Quinn, the Archives’ Terra Project Manager for Scholarly and Educational Initiatives, who curates and maintains the site.

Mosler’s Civil War diary dates from October 1862 when he was an illustrator for Harper’s Weekly and an aide-de-camp to Gen. R.W. Johnson as part of the Ninth Indiana Volunteer Regiment with the Union troops. Mosler wrote about encampments, encounters and occasionally his work for Harper’s Weekly. He recorded these impressions in a slim pocket diary. Though not lengthy at only 37 pages, the diary provides a firsthand account of the suffering and weariness of war. He wrote, “Today we skirmished and advanced in line of battle in Perryville and found it evacuated. In the evening Col. Blake Cotton and myself went out to view the Battlefield which was a sight that I have not the power to express.”

The website includes a digital reproduction and transcript of the diary that makes Mosler’s 19th-century handwriting legible. Until now, tiny cursive notes in faded and smudged pencil had been difficult for researchers to decipher.

An interactive map allows visitors to trace his movement around the state of Kentucky during October 1862. “When you tally it up, Mosler and the men marched more than 275 miles in the month of October,” said Quinn. “The map makes this journey plain. And his diary stands as a testament to their perseverance and stamina. They marched on hot and dusty days and slept outside on frosty, cold evenings. His descriptions help us to understand the monotony and ardor of war.”

A timeline enables visitors to follow Mosler’s activities through his busy period as a war correspondent and artist. An image gallery includes more than two dozen illustrations in Harper’s Weekly between June 1861 and November 1862 depicting the landscape of war: battlefields, infrastructure and streetscapes principally in Kentucky, but also in Ohio, Tennessee and Alabama.

This diary is but one item from Mosler’s papers at the Archives of American Art. Mosler began his career in Cincinnati, lived in Germany and Paris for at least two decades and finally settled in New York. He enjoyed financial and critical success during his lifetime. The collection documents Mosler’s life and career through biographical material; personal and professional letters from members of the military, museums, family, friends and colleagues; writings; personal business records; printed material; artwork and sketchbooks; and photographs of him, his family, colleagues and works of art.