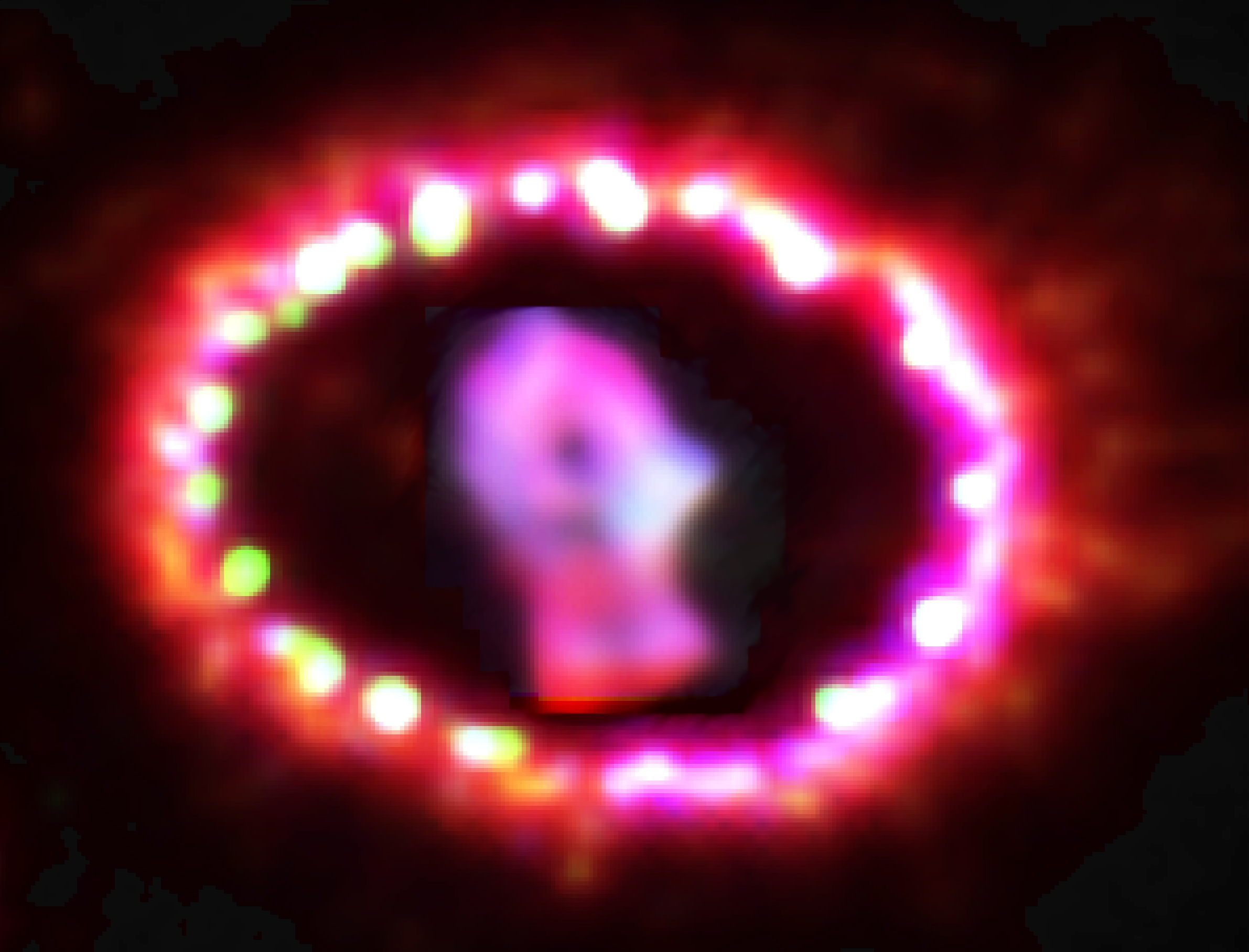 In 1987, light from an exploding star in a neighboring galaxy, the Large Magellanic Cloud, reached Earth. Named Supernova 1987A, it was the closest supernova explosion witnessed in almost 400 years, allowing astronomers to study it in unprecedented detail as it evolves.

Today a team of astronomers announced that the supernova debris, which has faded over the years, is brightening. This shows that a different power source has begun to light the debris, and marks the transition from a supernova to a supernova remnant.

“Supernova 1987A has become the youngest supernova remnant visible to us,” said Robert Kirshner of the Harvard-Smithsonian Center for Astrophysics (CfA).

Kirshner leads a long-term study of SN 1987A with NASA’s Hubble Space Telescope. Since its launch in 1990, Hubble has provided a continuous record of the changes in SN 1987A.

As shown in the accompanying image, SN 1987A is surrounded by a ring of material that blew off the progenitor star thousands of years before it exploded. The ring is about one light-year (6 trillion miles) across. Inside that ring, the “guts” of the star are rushing outward in an expanding debris cloud.

Most of a supernova’s light comes from radioactive decay of elements created in the explosion. As a result, it fades over time. However, the debris from SN 1987A has begun to brighten, suggesting that a new power source is lighting it.

“It’s only possible to see this brightening because SN 1987A is so close and Hubble has such sharp vision,” Kirshner said.

A supernova remnant consists of material ejected from an exploding star, as well as the interstellar material it sweeps up. The debris of SN 1987A is beginning to impact the surrounding ring, creating powerful shock waves that generate X-rays observed with NASA’s Chandra X-ray Observatory. Those X-rays are illuminating the supernova debris and shock heating is making it glow. The same process powers well-known supernova remnants in our galaxy like Cassiopeia A.

Because it’s so young, the remnant of SN 1987A still shows the history of the last few thousand years of the star’s life recorded in the knots and whorls of gas. By studying it further, astronomers may decode that history.

Eventually, that history will be lost when the bulk of the expanding stellar debris hits the surrounding ring and shreds it. Until then, SN 1987A continues to offer an unprecedented opportunity to watch a cosmic object change over the course of a human lifetime. Few other objects in the sky evolve on such short time-scales.

This research appears in a paper in the June 9, 2011 issue of Nature. The first author is Josefin Larsson (University of Stockholm).