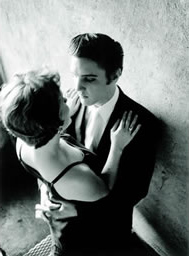 Freelance photojournalist Alfred Wertheimer was hired by RCA Victor in 1956 to shoot promotional images of a recently signed 21-year-old recording artist, Elvis Presley. Wertheimer’s instincts to “tag along” with the artist after the assignment and the resulting images provide a look at Presley before he exploded onto the scene and became one of the most exciting and influential performers of his time. “Elvis at 21: Photographs by Alfred Wertheimer,” a new Smithsonian traveling exhibition, presents 56 of these striking images and opens at the National Portrait Gallery in Washington, D.C., Oct. 23.

The 1956 photographs from the “Elvis at 21” exhibition show more than a musician on the rise. The images illustrate the calm before the storm—the simple and complacent American society before Elvis’ impact on youth and popular culture. The consumer market swelled with the arrival of the young performer, as radio, recordings and movies became the new definition of entertainment.

“American musical culture was completely changed by the arrival of Elvis Presley,” said Martin Sullivan, director of the National Portrait Gallery. “Wertheimer’s photographs give us a glimpse into Presley’s world leading up to his catapult to stardom.”

Wertheimer had unparalleled access and documented Presley on the road, backstage, in concert, in the recording studio and at home in Memphis, Tenn. “Colonel” Tom Parker, Presley’s manager, restricted contact just a short time later. The photographs document a remarkable time when Presley could sit alone at a drugstore lunch counter.

Wertheimer was up close to capture Presley’s flirtatious encounter with a young woman backstage in Richmond, Va. He was in the New York City recording studio on the historic day Presley recorded “Don’t Be Cruel” and “Hound Dog.” Both songs hit No. 1 on the charts, the first and only time a single record would achieve this distinction.

Wertheimer also joined Presley after the recording session as he traveled home to Memphis by train. One image shows Presley as just part of the crowd surrounding a lunch vendor on a train platform during a brief stop on the 27-hour trip. The anonymity he had during this stop was short-lived; the trip followed a busy few months when Presley appeared on the television shows Stage Show, The Milton Berle Show and The Steve Allen Show. The photographs of a concert in Russwood Park on his return to Memphis show a young man who needed a police escort to get through the crowd of fans between his car and the stadium.

The large-format pigment editions in the exhibition were produced by master printer David Adamson. On opening his Washington, D.C., studio in 1979, Adamson became a pioneer in the craft of digital art printing. Adamson’s digital format, allowing for complete control over pixel, density, contrast and brightness levels, has remained the preferred printing method of many artists to date.

Developed collaboratively by the Smithsonian Institution Traveling Exhibition Service, the National Portrait Gallery and the Govinda Gallery, “Elvis at 21” will be on view at the Portrait Gallery through Jan. 23, 2011. Previously, the exhibition has traveled to museums around the country and will continue to travel through 2013. “Elvis at 21” is sponsored nationally by History.

SITES has been sharing the wealth of Smithsonian collections and research programs with millions of people outside Washington, D.C., for more than 55 years. For exhibition description and tour schedules, visit www.sites.si.edu.

The History channel is a leading destination for revealing, award-winning, original non-fiction series and event-driven specials that connect history with viewers. Programming covers a diverse variety of historical genres ranging from military history to contemporary history, technology to natural history, as well as science, archaeology and pop culture.

Located in Washington, D.C., the Govinda Gallery exhibits one of the largest collections of music photography in the world. Over 30 years, the gallery has organized more than 200 exhibitions of many of the nation’s leading artists.

The Smithsonian’s National Portrait Gallery tells the history of America through the individuals who have shaped its culture. Through the visual arts, performing arts and new media, the Portrait Gallery portrays poets and presidents, visionaries and villains, actors and activists whose lives tell the American story.The National Portrait Gallery is part of the Donald W. Reynolds Center for American Art and Portraiture at Eighth and F streets N.W., Washington, D.C. Smithsonian Information: (202) 633-1000; (202) 633-5285 (TTY). Website: npg.si.edu.

Note to editors: An image for publicity may be downloaded from a password-protected FTP site. Call (202) 633-8293 or e-mail bentleyb@si.edu to access the site.