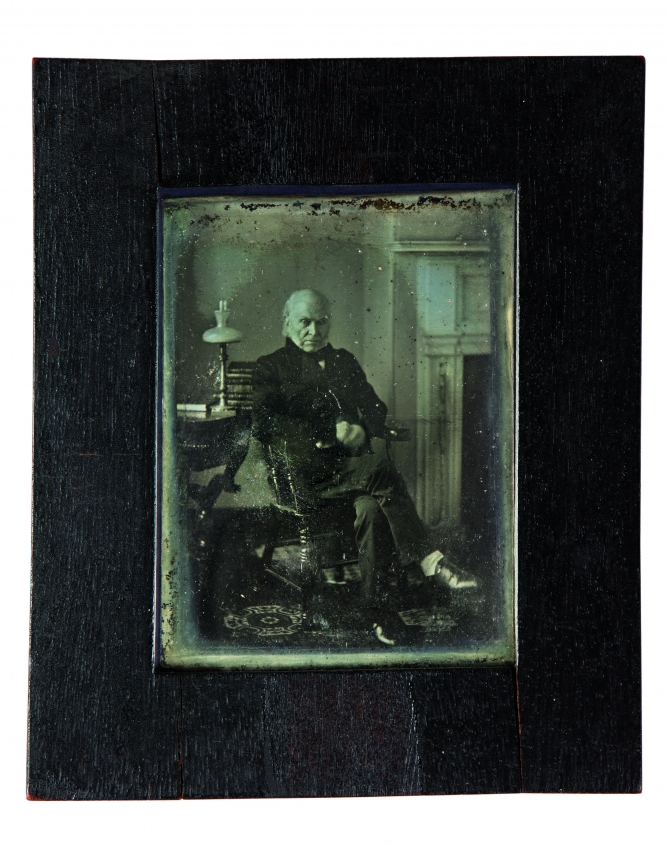 The Smithsonian’s National Portrait Gallery announced today that it has acquired the earliest known photograph of a U.S. President for its permanent collection. Dating from 1843, the photograph of President John Quincy Adams is a unique daguerreotype and was produced by artist Philip Haas just four years after Louis Daguerre’s radical invention was revealed to the world. The portrait will go on public view in 2018 when it will be featured in the museum’s recently updated “America’s Presidents” exhibition.

Described by Sotheby’s as “an invaluable document,” the auction house noted that this daguerreotype “crystallizes a remarkable moment in the history of photography and American politics.” The National Portrait Gallery purchased the portrait for $360,500 at the Sotheby’s photographs auction held Oct. 5 in New York City. Support for the acquisition of Adams’ portrait comes from the Secretary of the Smithsonian and the Smithsonian National Board; additional funding is being raised privately by the Portrait Gallery.

In March 1843, Adams visited the Washington, D.C., studio of Haas for a portrait sitting, becoming the first U.S. President to have his likeness captured through the new medium of photography. This sitting took place nearly 15 years after Adams had served as the nation’s sixth President (1825–1829). At the time, he was serving in Congress as a U.S. Representative from Massachusetts.

Adams’ portrait session with Haas yielded three daguerreotypes, but only one is known to have survived. This lone daguerreotype—the one entering the Portrait Gallery’s collection—was originally a gift from Adams to Congressman Horace Everett in 1843. The portrait remained with the Everett family until it was consigned to Sotheby’s by a direct descendant.

“John Quincy Adams, son of John Adams, was the last President to have a direct tie back to the Founding generation, and the fact that he sat in front of a camera to have his portrait taken, is sort of remarkable,” said Kim Sajet, director of the National Portrait Gallery. “It confirms that in many ways America was born modern; embracing not only new government ideals but also the latest technologies that helped its leaders to become accessible to the public. To have acquired this unique piece of American history on the eve of our 50th anniversary has particular resonance because one of our goals is to remind people that the individual actions of our leaders and how we record their legacies impact the future.”

Adams documented the March 1843 portrait session in his diary, noting that he walked to Haas’ establishment at 9 o’clock in the morning “my hands in woolen lined gloves bitterly pinched with cold. Found Horace Everett [U.S. Congressman from Vermont’s third district] there for the same purpose of being facsimiled. Haas took him once, and then with his consent took me three times, the second of which he said was very good—for the operation is delicate: subject to many imperceptible accidents, and fails at least twice out of three times.”

Adding to the significance of bringing this historic portrait to the museum is the crucial role Adams played in establishing the Smithsonian Institution. For over a decade, Adams tirelessly advocated for the implementation of James Smithson’s bequest to establish an institution dedicated to the increase and diffusion of knowledge. With this acquisition, the Portrait Gallery brings this singular treasure to its permanent collection and enriches the way the museum portrays Adams’ remarkable story as President, statesman and champion for the Smithsonian.

The two other daguerreotypes from Adams’ sitting for Haas are now lost and known only through copy images—one in the form of a smaller-format copy daguerreotype in the collection of the Metropolitan Museum of Art and the other in the form of a lithograph issued by Haas in 1843, a variant of which is in the Portrait Gallery’s print collection.

Smithsonian collections include two other daguerreotypes of Adams. One is a small portrait in the Portrait Gallery’s collection taken in August 1843 by the studio of Bishop & Gray in Utica, N.Y. The second daguerreotype, which dates from 1846, is in the collection of the National Museum of American History.

This one-of-a-kind dagurreotype of Adams is intrinsically significant to both American history and to the history of photography.