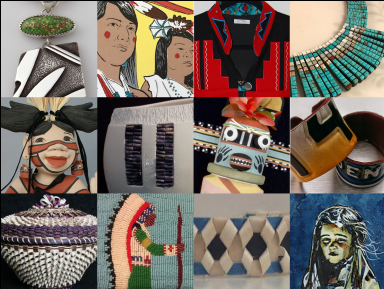 The Smithsonian’s National Museum of the American Indian will host its annual Native Art Market Saturday and Sunday, Dec. 2–3, at its Washington, D.C., and New York City locations. Featuring the works of nearly 40 Native artists at each venue, the two-day event includes traditional and contemporary jewelry, basketry, paintings, sculpture, beadwork, photography and fine apparel from across the hemisphere.

At the museum’s Washington location, the market will be located in the Potomac Atrium and open 10 a.m. to 5:30 p.m. each day. The market at the New York location will be open 10 a.m. to 5 p.m. in the Diker Pavilion for Native Arts and Cultures. Admission is free.

At the museum’s George Gustav Heye Center in New York, a ticketed preview party held Friday, Dec. 1, from 4:30 to 8 p.m. will provide a first-look preview for guests of the Art Market. Ticketholders will have the opportunity to purchase works ahead of the main weekend event and will be treated to a cocktail reception and artist talk at 4:30 p.m., “Tradition and Innovation in Native Art and Design,” moderated by Kathleen Ash-Milby (Diné), co-curator of the museum’s most recent exhibition “Transformer: Native Art in Light and Sound.” Tickets start at $50 ($40 for members) and can be purchased online, by calling (212) 514-3750 or by emailing nyrsvp@si.edu.

The Washington museum will also host a members’ preview Friday, Dec. 1, from 5:30 to 7:30 p.m. No tickets required; admission is free.

The National Museum of the American Indian is committed to advancing knowledge and understanding of the Native cultures of the Western Hemisphere—past, present and future—through partnership with Native people and others. To learn more about the museum’s mission, visit AmericanIndian.si.edu.

In Washington, the museum is located on the National Mall at Fourth Street and Independence Avenue S.W. It is open each day from 10 a.m. to 5:30 p.m. (closed Dec. 25). It is accessible from L’Enfant Plaza Metrorail station via the Maryland Avenue/Smithsonian Museums exit. Follow the museum on Facebook, Twitter and Instagram.

In New York City, the museum is located at One Bowling Green, across from Battery Park. It is open every day from 10 a.m. to 5 p.m. and Thursdays until 8 p.m. By subway, the museum may be reached by the 1 to South Ferry, the 4/5 to Bowling Green, the J/Z to Broad Street or the R/W to Whitehall Street. Follow the George Gustav Heye Center on Facebook, Twitter and Instagram.

The public can join the conversation on social media using the hashtags #NativeArtMarket and #ArtMarketNMAI.