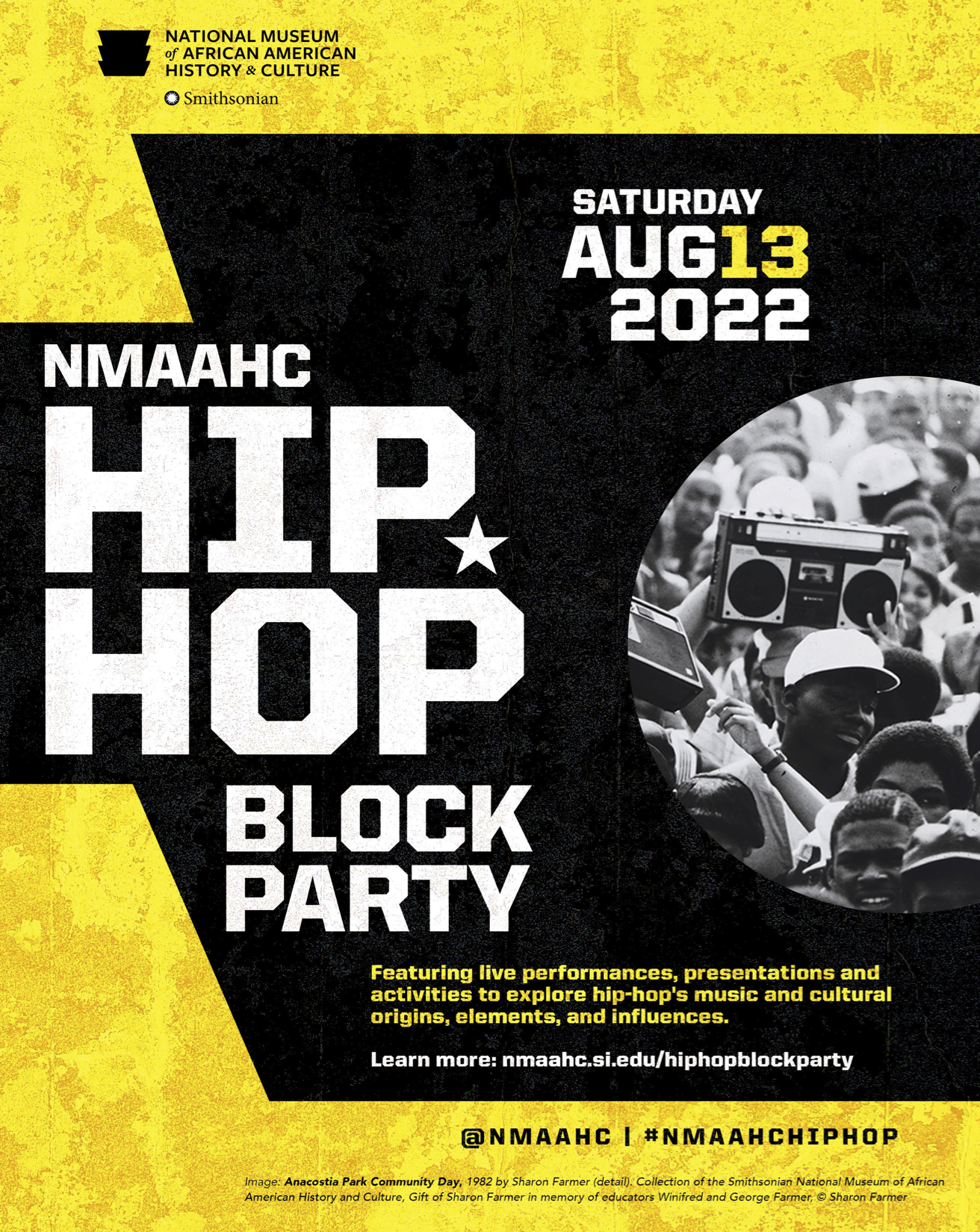 The Smithsonian’s National Museum of African American History and Culture (NMAAHC) will host its inaugural Hip-Hop Block Party Saturday, Aug. 13, to celebrate the first anniversary of the release of the Smithsonian Anthology of Hip-Hop and Rap. The event will feature performances by local and national talent, presentations and activities that explore hip-hop music’s origins and cultural influence from 11 a.m. to 11 p.m. The main stage will be outdoors near Madison Drive, and indoor performances and events are set for Heritage Hall on the museum’s first floor. The Hip-Hop Block Party is free; however, tickets are required for entry and are available through the museum’s website.

“The origins of hip-hop and rap rest in community where people gathered together in basements, on street corners, neighborhood dance parties and community shows to tell the stories of the people and places that brought it to life in a language all its own,” said Dwandalyn Reece, associate director for curatorial affairs at NMAAHC.

“It is only fitting that NMAAHC celebrates the one-year anniversary of the Smithsonian Anthology of Hip-Hop and Rap with a block party in our front yard. Like a true block party, we invite all ages to come together to enjoy activities and performances in honor of the museum’s greatest homage to the music and culture of hip-hop.”

In 2021, NMAAHC, in partnership with Smithsonian Folkways Recordings, released The Anthology of Hip-Hop and Rap, a first-of-its-kind collection chronicling hip-hop’s growth and impact from the parks of the Bronx to the broadest areas of the American experience and worldwide influence.

The block party will feature daytime and evening activities and performances. During the day (11 a.m.–5 p.m.), Magic 102.3 radio personality Vic Jagger will host performances on the main stage located outside the museum on Madison Drive. There will also be hip-hop dance workshops with the nonprofit dance troupe Culture Shock DC in the museum’s Heritage Hall, as well as book talks and panel discussions featuring some of hip-hop’s formative figures. Performances during the day session include Alphabet Rockers, Mumu Fresh and a DMV Showcase curated by DJ Heat. The last entry for the hip-hop block party’s morning session will be at 4:30 p.m., and at 5:30 p.m., the museum will briefly shutdown and reopen for the evening festivities.

Beginning at 6 p.m., the evening festivities will begin outside on the main stage with a DJ mix by J.Period and other hip-hop artists. The evening concert begins at 8 p.m. with performances by The Halluci Nation and Grammy-nominated rapper D Smoke on the main stage. The celebration will conclude with a dance party mixed by hip-hop pioneer DJ Spinderella. The last entry for the hip-hop block party’s evening session will be at 10:15 p.m. and the party will go on until 11 p.m.

Ticket holders can tour the museum’s exhibitions, including “Represent: Hip-Hop Photography,” in the Earl W. and Amanda Stafford Center for African American Media Arts (CAAMA) gallery on the second floor. The museum’s Sweet Home Cafe will offer a hip-hop-inspired menu, and Hip-Hop Block Party merchandise will be available to purchase in the museum’s store.

In addition to the Hip-Hop Block Party, the museum will premiere gOD-Talk 2.0: Hip-Hop & #BlackFaith, the seventh episode of the web-based series, live on Facebook Sunday, Aug. 14. The hip-hop and #BlackFaith episode features several prominent hip-hop artists and religious scholars, and it explores the relationship between hip-hop culture and Black expressions of faith and spirituality.

The Hip-Hop Block Party is generously supported by the NMAAHC Corporate Leadership Council. For more information and tickets to the daylong event, including the artist lineup, visit the Hip-Hop Black Party website. Follow the conversation on social media @nmaahc and use the hashtag #NMAAHCBlockParty.

Since opening Sept. 24, 2016, the National Museum of African American History and Culture has welcomed more than 7.5 million in-person visitors and millions more through its digital presence. Occupying a prominent location next to the Washington Monument on the National Mall in Washington, D.C., the nearly 400,000-square-foot museum is the nation’s largest and most comprehensive cultural destination devoted exclusively to exploring, documenting and showcasing the African American story and its impact on American and world history. For more information about the museum, visit nmaahc.si.edu follow @NMAAHC on Twitter, Facebook and Instagram or call Smithsonian information at (202) 633-1000.