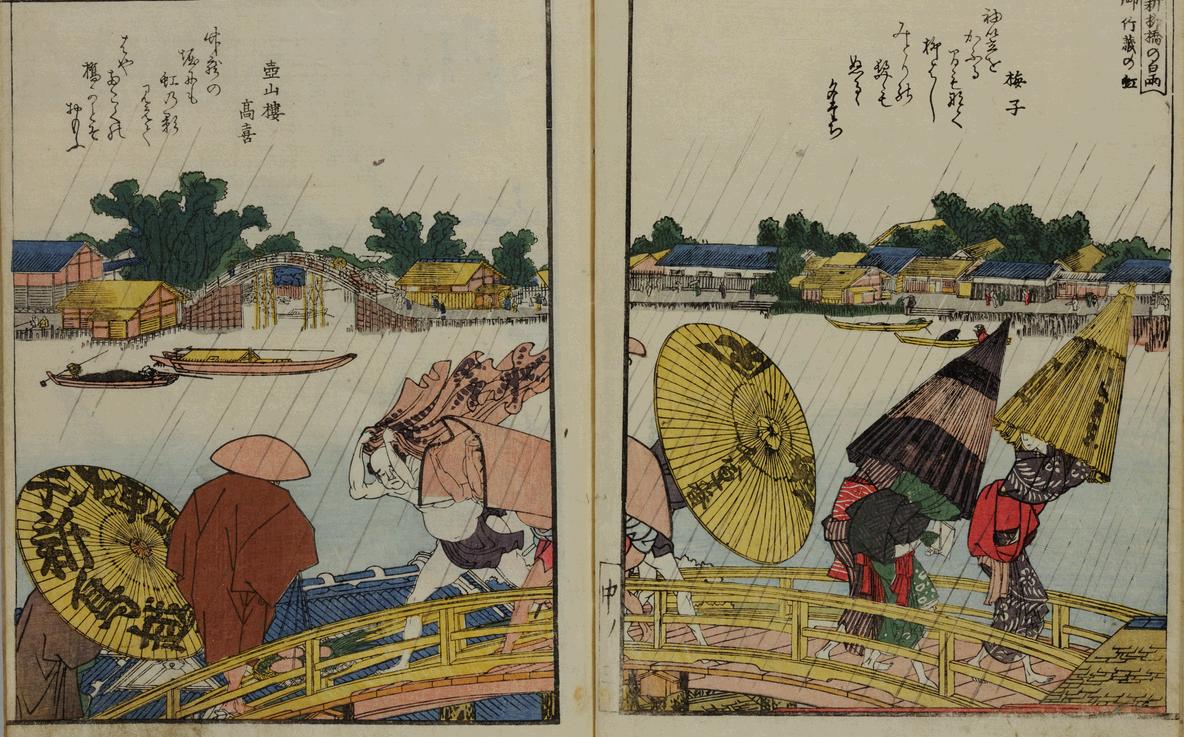 Edo-period Japan (1615-1868) was an age of great social and political change—and of epic book consumption. An expanding emphasis on knowledge and creativity gave rise to sophisticated networks of artists, writers and publishers, all dedicated to feeding readers’ burgeoning appetite for new publications. “Hand-Held: Gerhard Pulverer’s Japanese Illustrated Books,” on view April 6–Aug. 11 at the Smithsonian’s Arthur M. Sackler Gallery, introduces visitors to this remarkable “reading culture” in the Pulverer Collection’s first major exhibition since its acquisition in 2007.

Similar to blogging and e-publication in the 21st century, illustrated books (ehon) in Edo-period Japan evolved quickly into a popular mode of both artistic production and commercial trade. Newly efficient woodblock printing made them available to a wider audience—previously restricted to highly educated elites due to the cost of hand-copying. Circulation expanded rapidly due to publishers, booksellers, informal exchange and lending libraries, and books quickly became the new cultural commons where artists, actors and writers alike engaged with their audiences. Innovative genres emerged, catering to a wide spectrum of Edo society, from picture books for the less literate to popular fiction to scholarly texts.

“Through books, all of Japanese society could learn about culture, literature, science, religion and distant places even though foreign contact was rare,” said Ann Yonemura, associate curator of Japanese art at the Freer and Sackler galleries. “Illustrated books were not only a source of information, but an important medium of artistic expression and entertainment that continues today.”

Similar to a modern-day bookstore, the exhibition is organized by subject matter: classical Japanese literature, contemporary poetry, fiction (including serial publications of warrior adventures), travel, nature studies, design books and “how-to” manuals on popular interests of the time. Utamaro’s Shell book (Shiohi no tsuto)—a luxuriously printed poetry book reflecting refined artistic taste— and other fine art books by noted author’s such as Hokusai are featured as highlights of the collection.

The Gerhard Pulverer Collection, purchased in its entirety by the Freer Gallery of Art in 2007, includes many of the rarest and most pristine examples of the Edo period’s most famous illustrated books. Its 936 titles encompass almost 2,200 volumes, ranging in date from the early 17th century to the 1970s. Gathered over a period of more than 30 years by Pulverer, a renowned German medical researcher, the collection was regarded as the premier private collection of Japanese illustrated books outside Japan.

“Hand-Held: Gerhard Pulverer’s Japanese Illustrated Books” coincides with the 2013 National Cherry Blossom Festival, and it will be accompanied by hands-on workshops, lectures, childrens’ programs and a Japanese design festival.

An online catalog is currently being developed by the Freer|Sackler, with support from the Getty Online Scholarly Catalogue Initiative and the Anne van Biema Endowment Fund. On its completion, the entire Pulverer Collection will be available online with cover-to-cover images, detailed data and analysis.

“Hand-Held: Gerhard Pulverer’s Japanese Illustrated Books” is one of several exhibitions in 2013 that feature individual collectors whose contributions to the Freer and Sackler galleries have revolutionized the understanding and appreciation of major areas of Asian art. Other exhibitions will feature the vision of museum founder Charles Lang Freer’s Chinese collection (“Promise of Paradise: Early Chinese Buddhist Sculpture,” opened Dec. 1, 2012, on view indefinitely) and collector Paul Singer (“One Man’s Search for Ancient China: The Paul Singer Collection;” Jan. 19–July 7).

Support for the exhibition is provided by The Ann van Biema Endowment Fund.

The Arthur M. Sackler Gallery, located at 1050 Independence Avenue S.W., and the adjacent Freer Gallery of Art, located at 12th Street and Independence Avenue S.W., are on the National Mall in Washington, D.C. Hours are 10 a.m. to 5:30 p.m. every day (closed Dec. 25), and admission is free. The galleries are located near the Smithsonian Metrorail station on the Blue and Orange lines. For more information about the Freer and Sackler galleries and their exhibitions, programs and other public events, visit www.asia.si.edu. For general Smithsonian information, call (202) 633-1000. # # #