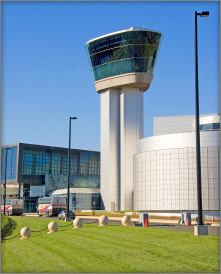 What do Enterprise and Columbia have in common? The space shuttle program? Guess again. Airships! An historic control car designated C-49 was first put into service as the Goodyear blimp Enterprise Aug. 23, 1934. The car’s final assignment was on the blimp Columbia N4A based in Carson, Calif., from July 1975 until June 1986. The Goodyear Tire & Rubber Co. is donating this important piece of U.S. aeronautical heritage to the National Air and Space Museum.

“The C-49 is a veteran: it first took to the air during the golden age of the airship in the 1930s, and it saw wartime service as a training and patrol craft before resuming its post-war role as one of Goodyear’s famed commercial blimps,” said Tom Crouch, senior curator of aeronautics. “It is a welcome addition to our collection because it represents the wide range of roles played by blimps. It will have a place of honor on the display floor of the National Air and Space Museum’s Steven F. Udvar-Hazy Center, along with the control car of the pioneering Goodyear blimp, Pilgrim.”

Goodyear manufactured the C-49 control car in 1933. In 1942 it was acquired by the U.S. Navy and designated L-5. It spent most of the war as a training craft and saw some patrol duty; it is one of only two surviving L-ship control cars with a record of WWII service. Reacquired by Goodyear Jan. 24, 1946, the control car was rebuilt as a spare for GZ-20 class commercial blimps in 1969 and registered as N4A May 12, 1970. As the airship Columbia it took to the air July 12, 1975.