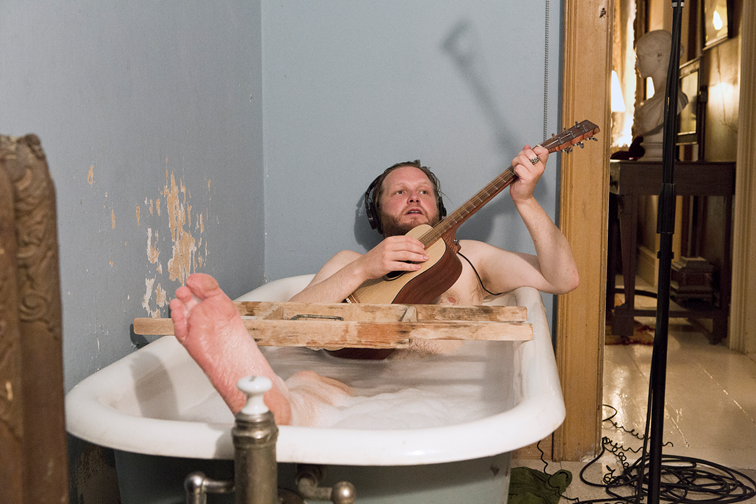 “Ragnar Kjartansson,” the first major survey of the work of the internationally celebrated Icelandic artist, runs Oct. 14, 2016–Jan. 8, 2017, at the Smithsonian’s Hirshhorn Museum and Sculpture Garden. The exhibition is the first comprehensive overview of the artist’s prodigious output since his debut in Reykjavík and Stockholm in 2000. It encompasses the entirety of Kjartansson’s practice, which includes film, video installation, photography, painting and drawing. It will include a number of works not previously exhibited in U.S. museums. The exhibition is conceived and organized by the Barbican, London in association with the Hirshhorn.

Born into a theatrical family in Reykjavík in 1976, Kjartansson, who lives and works in the Icelandic capital, makes work that explores familial, social and cultural ties with poignancy, irony and wit. He has had solo exhibitions at venues such as the Palais de Tokyo in Paris, the New Museum in New York and the Guggenheim Museum Bilbao, and in 2009 he became the youngest artist to represent Iceland at the Venice Biennale.

“We are honored to be showing the work of an artist who has had such a profound impact on the contemporary art world,” said Melissa Chiu, the Hirshhorn’s director. “American viewers are perhaps most familiar with videos of Kjartansson’s musical endurance performances, such as ‘S.S. Hangover,’ which was shown at the Hirshhorn last year. But few have had the opportunity to see the full range of his talent.”

“Ragnar Kjartansson is truly an artist of the 21st century,” said Stéphane Aquin, the Hirshhorn’s chief curator and the coordinating curator of the exhibition. “Our identities are increasingly wrapped up in the culture we consume and produce, and virtually everyone is now aware of the self as a kind of performance. With great insight, Ragnar grasps what it is to remain fully human under those circumstances.”

The exhibition will include Kjartansson’s principal works, such as “The Visitors” (2012), a nine-channel video in which musicians scattered throughout a decaying mansion perform a setting of “nihilistic feminine gospel music,” and “The End,” a series of 144 paintings made during the 2009 Venice Biennale as an examination of the purpose and value of art at a time of financial crisis in Iceland. It will also include other major works, as well as a new work yet to be conceived, and will be accompanied by a fully illustrated catalog.

For more information about Kjartansson and the exhibition, visit hirshhorn.si.edu/collection/ragnar-kjartansson/.