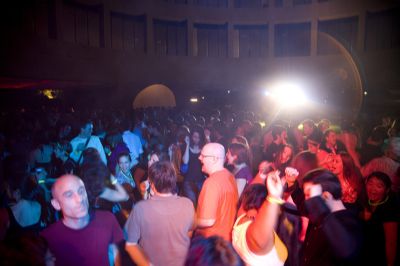 The Smithsonian’s Hirshhorn Museum’s signature After Hours event returns Friday, Oct. 14, with a special program featuring a live music performance by The Crystal Ark; multimedia projections by Bec Stupak and Honeygun Labs; late-night music by Nancy Whang, former keyboard player from LCD Soundsystem and vocalist for The Juan Maclean; and curator-led gallery talks. After Hours is presented in conjunction with the landmark exhibition “Andy Warhol: Shadows” and as part of “Warhol On the Mall,” a joint celebration on the occasion of two Warhol exhibitions at the Hirshhorn and the National Gallery of Art. Hirshhorn After Hours takes place from 8 p.m. until midnight. Tickets are $25 and available by advance purchase only at www.hirshhorn.si.edu/afterhours. For more information, visit www.hirshhorn.si.edu/afterhours and follow us on Twitter @ Hirshhorn and on Facebook.

Backing Russom and Ruiz is an all-star group of musicians featuring: Matt Thornley who has been involved in many projects with DFA Records and LCD Soundsystem; and percussionist Alberto Lopez, who has worked with Rubén Blades, Celia Cruz, Ozomatli, The Brand New Heavies and even The Dalai Lama. Singers Jaiko Suzuki, Sokhna Heather Mabyn and dancers Irene Deros and Alberto Cortes round out the group.

Stupak is a video and performance artist working in Brooklyn, N.Y. Her work uses collage, repetition and shifting fields of bright color to create psychedelic animations and films. She got her start early on as a VJ at raves, performing around the world and as a regular performer at Lonnie Fischer’s Ultraworld events at the D.C. Armory. Stupak started working with the New York-based collective Assume Vivid Astro Focus in 2002. Their first collaboration was “Freebird,” which was quickly followed by “Walking on Thin Ice.” In 2004, the collective was featured in the Whitney Museum of American Art’s signature Biennial exhibition.

Stupak’s first solo show, “Radical Earth Magic Flower,” premiered in 2006 at Deitch Projects in New York. The show featured a number of videos including her blind remake of Jack Smith’s 1962 cult classic “Flaming Creatures.” Stupak returned to Deitch Projects in 2007 for a one-night engagement along with The Dazzle Dancers to premiere their music video collaboration “The Love Boat.” Also in 2007, Stupak began a collaboration with the Joshua Light Show, which was originally the house lightshow at the Fillmore East on Manhattan’s Lower East Side in the 1960s.

For the first time ever, all 102 paintings of Warhol’s monumental artwork “Shadows” (1978–1979) will be shown together at the Smithsonian’s Hirshhorn Museum, from Sept. 25 to Jan. 15, 2012. Hung edge-to-edge, these silkscreened and hand-painted canvases will create a spectacular panorama as they extend uninterrupted nearly two-thirds of the way around the outer perimeter of the Hirshhorn’s distinctive curved galleries. “Andy Warhol: Shadows” offers viewers an unprecedented opportunity to see this late work in its entirety and to experience the full power of the artist’s vision of producing an immersive environment.

“Andy Warhol: Shadows” is organized by Dia Art Foundation. The foundation acquired the piece from the artist during its inaugural exhibition at the Heiner Friedrich Gallery in New York in 1979, and it has been on long-term view at Dia:Beacon since. Major exhibition funding is provided by the Bell Family Foundation and Constance R. Caplan with additional support from the Holenia Trust Fund, in memory of Joseph H. Hirshhorn, the Friends of Jim and Barbara Demetrion Endowment Fund and the Hirshhorn’s Board of Trustees.

About “Warhol On the Mall”

An array of public programs arrive on the National Mall this fall in celebration of artist Andy Warhol (1928–1987), who radically shifted traditional boundaries between fine art and popular culture. “Warhol On the Mall” is a joint celebration on the occasion of two exhibitions: “Andy Warhol: Shadows” at the Hirshhorn (Sept. 25–Jan. 15, 2012) and “Warhol: Headlines” at the National Gallery of Art in Washington (Sept. 25–Jan. 2, 2012).

To accompany “Andy Warhol: Shadows,” the Hirshhorn plans a range of events, including an evening lecture series with noted artists and scholars titled “Talking About Andy,” film programs, Hirshhorn After Hours, gallery talks, workshops for teens and a “Directions” exhibition featuring Warhol’s film “Empire” and two contemporary artworks inspired by the original. In conjunction with the exhibition “Warhol: Headlines,” the National Gallery of Art will offer film programs for all ages, concerts, a multimedia performance by Dean & Britta, gallery talks, a symposium and lectures with noted artists and scholars, and teacher and student studio workshops.

The Hirshhorn Museum and Sculpture Garden, the Smithsonian Institution’s museum of international modern and contemporary art, has nearly 12,000 paintings, sculptures, photographs, mixed-media installations, works on paper and new media works in its collection. The Hirshhorn presents diverse exhibitions and offers an array of public programs that explore modern and contemporary art. Located at Independence Avenue and Seventh Street S.W., the museum is open daily from 10 a.m. to 5:30 p.m. (except Dec. 25). Admission to the galleries and special programs is free. For more information about exhibitions and events, please visit hirshhorn.si.edu. Follow the Hirshhorn on Facebook at facebook.com/hirshhorn and on Twitter at twitter.com/hirshhorn. To request accessibility services, please contact Kristy Maruca at marucak@si.edu or (202) 633-2796, preferably two weeks in advance.