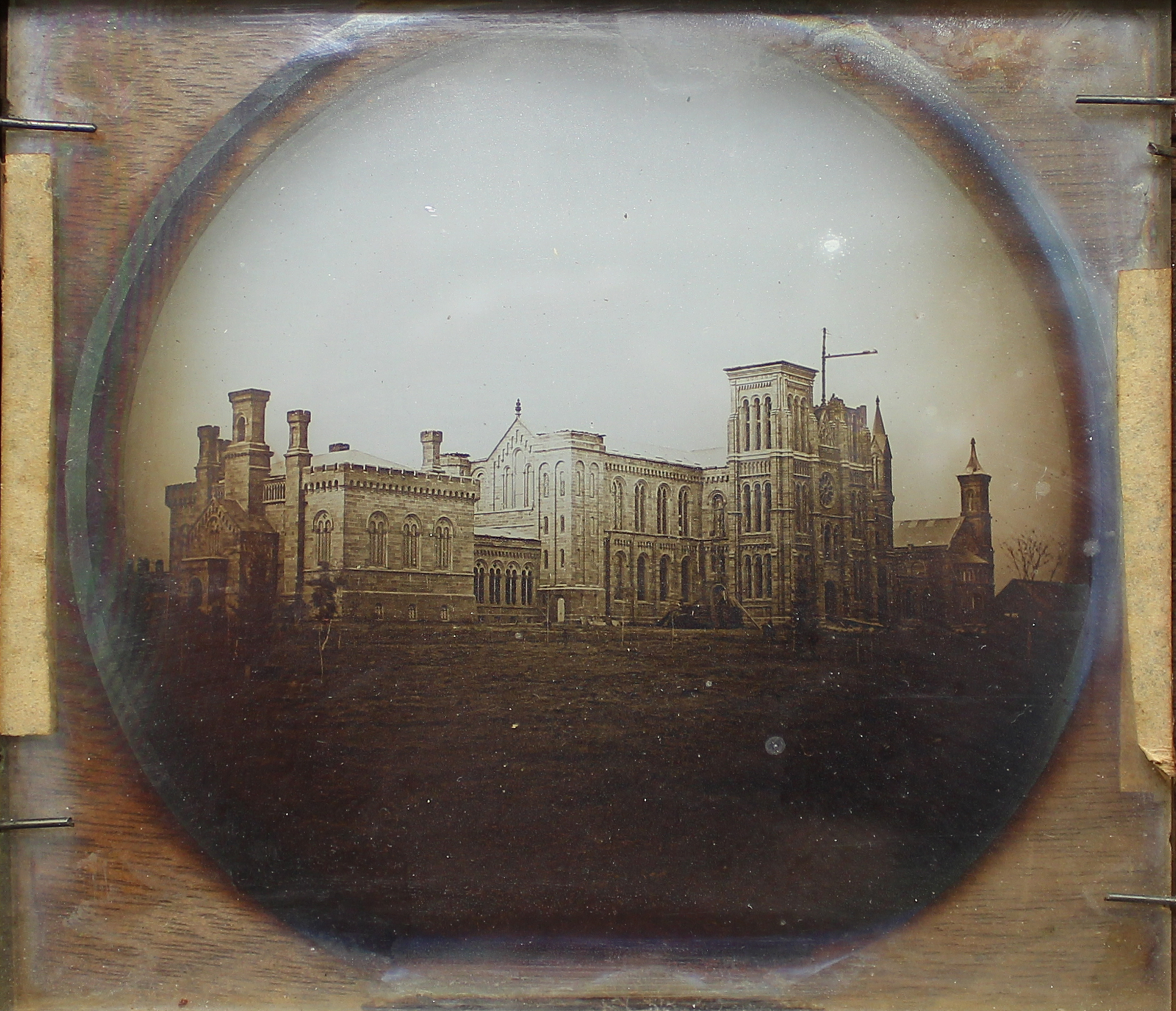 After President James K. Polk signed the legislation creating the Smithsonian Aug. 10, 1846, one of the first tasks facing its governing body, the Board of Regents, was to erect a building to house the new Institution. Less than nine months later, the cornerstone of the Smithsonian Institution Building, now called the Castle, was laid May 1, 1847. The day was declared a holiday, and a mile-long parade made its way from City Hall to the White House, where the President joined the procession before it continued to the Smithsonian grounds. Once there, more than 6,000 people watched as the cornerstone was laid.

This photograph was taken in 1850 during the Castle’s construction and is the earliest-known image of the building. It shows the two completed wings of the building: The east wing housed the lecture hall, laboratories and home for the Secretary of the Smithsonian; the west wing contained the library and the reading room. The central portion of the building, now called the Great Hall, was still empty and would remain so until 1855. At the time of this photograph, only two of the Castle’s nine towers were completed. The crane in the image rises over the North Tower, which would eventually soar 140 feet above the National Mall. The carriage porch at the front of the building would not be completed until late 1851. Architect James Renwick designed the building in a medieval revival style, which was meant to identify the Smithsonian as an educational institution.

“The Smithsonian has hundreds of photographs in its collections of the Castle, but none of the building under construction, which makes this image quite remarkable,” said Richard Stamm, curator of the Smithsonian Castle Collection. “The photograph is important because it verifies much of the written history we have about the odd way in which the Castle was built—the wings first and the main central section last. It greatly adds to the historical record we have for this national historic landmark.”

Brothers William and Frederick Langenheim of Philadelphia took the photograph using a new process they developed in 1849 and called hyalotype (from the Greek hyalos, meaning glass, and typos, meaning image or impression). This process produced a glass negative instead of the paper negative of the talbotype process. The glass negative could then be used to print either paper photographs or glass lantern slides. Hyalotypes were highly detailed and accurate, while talbotypes usually resulted in soft, slightly fuzzy images due to the coarse paper they were printed on. The exposure time for hyalotypes was about one minute, which made the process well suited for architectural studies but impractical for portraiture.

The image of the Castle was part of a set of 126 views published by the Langenheim brothers in 1850; several of the images were later exhibited at the 1851 Crystal Palace Exposition in London.

This rare hyalotype was a gift to the Smithsonian Castle Collection by Tom Rall of Arlington, Va., through Paula Fleming, a retired Smithsonian photo archivist.