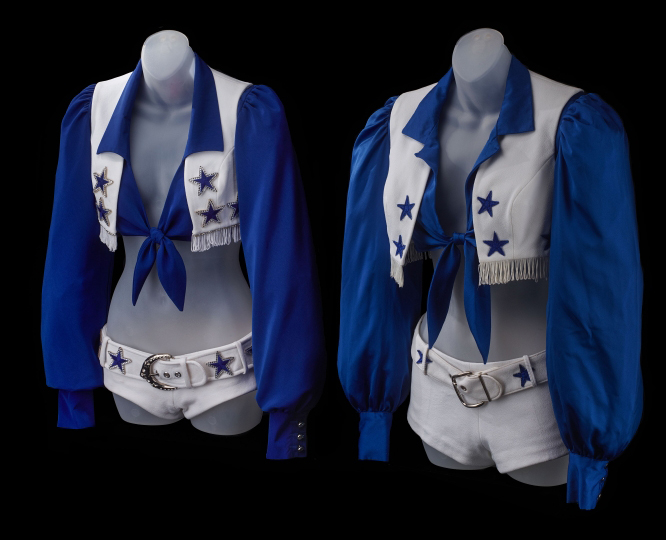 In 1972, the Dallas Cowboys Cheerleaders were the first to introduce choreographed dance routines that required rigorous physical training and hours of practice before every game. Three years later, the cheerleaders appeared at the 1975 Super Bowl and became famous across the nation.

“The Dallas Cowboys Cheerleaders raised the bar for NFL cheerleaders in the 1970s, using athleticism and a strong sense of self to set the standard for what an organization of empowered women can accomplish in today’s society,” said Jane Rogers, associate curator in the museum’s Division of Culture and the Arts.

Included in the donation are two uniforms—one from the 1980s, made by Levita Crager, accompanied by the original go-go boots worn during performances—and a set of poms. The other is a 2011 uniform made by Lisa Dobson, accompanied by the Lucchese western boots and poms used today. Three Barbie dolls from Mattel’s 2007 Pink Label Collection—a Latina, African American and Caucasian doll, all outfitted in the iconic uniform—also were donated. In addition to the uniforms, the museum acquired a poster from 1977, the first to feature an NFL cheerleading team, and an NFL-licensed Abbey Bear, traditionally awarded to a teammate who has gone above and beyond in helping her teammates succeed. In addition, Van Wagoner donated a copy of her original sketch of the innovative cheerleading uniform.

“Our collection of cheerleading material dates back to the days before Title IX guaranteed equal access for women to school sports,” Rogers said. “In those days, girls and women had few options in regard to sports, so cheerleading became an athletic-team activity for them.”

Since their first championship days in the 1970s, the Dallas Cowboys have been called “America’s Team” and their cheerleaders are known as “America’s Sweethearts.” The Dallas Cowboys Cheerleaders perform for more than 80,000 fans at each home game at AT&T Stadium, perform around the world on USO tours for American military personnel and families, and have made TV appearances on Saturday Night Live, Love Boat and Oprah, to name a few. They are the only cheerleading squad to have two self-titled TV movies and a 13-season-long cable TV show, DCC: Making the Team.

The Dallas Cowboys Cheerleaders received the USO’s first-ever Spirit of Hope Award, were inducted into the Veterans of Foreign Wars Hall of Fame and were awarded the American Legion’s Distinguished Service Medal in recognition of the many years of dedicated service to the men, women and families of American armed forces.

The donated artifacts will join the museum’s collection of cheerleading objects, which includes items from a 1934 high school precision-dance team, as well as items associated with the Kilgore Rangerettes, a college precision-dance team organized in 1949 by Gussie Nell Davis. These were collected because they were the first high school and college teams created specifically to involve girls and women in a sport at a time when their participation in sports was limited.

There are no immediate plans to display the new objects, but an exhibition is in development that will explore American culture and draw on the museum’s theater, music, sports and entertainment collections. That exhibition is expected to open in 2020.

Through incomparable collections, rigorous research and dynamic public outreach, the National Museum of American History explores the infinite richness and complexity of American history. It helps people understand the past in order to make sense of the present and shape a more humane future. The museum is located at 14th Street and Constitution Avenue N.W., and is open daily from 10 a.m. to 5:30 p.m. (closed Dec. 25). Admission is free. For more information, visit http://americanhistory.si.edu/. For Smithsonian information, the public may call (202) 633-1000.