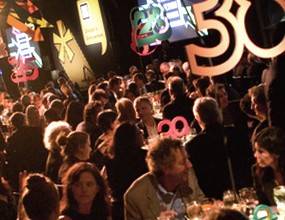 “The National Design Awards program is Cooper-Hewitt’s largest and most widespread educational initiative and celebrates the full spectrum of American design practice,” said Moggridge. “The provocative work of this year’s winners truly shapes the way we experience the world.”

First launched at the White House in 2000 as a project of the White House Millennium Council, the National Design Awards were established to promote excellence and innovation in design. The awards are accompanied each year by a variety of public education programs, including special events, panel discussions and workshops. First Lady Michelle Obama serves as the Honorary Patron for this year’s National Design Awards.

This year Cooper-Hewitt is keeping the focus of the awards on the exemplary work of the winners, and chose not to have category finalists. A jury of design leaders and educators from across the country, convened by the museum, reviewed submissions resulting from thousands of nominations submitted by the general public. Nominees must have at least seven years of experience in order to be nominated, and winners are selected based on the level of excellence, innovation and public impact of their body of work.

The 2012 National Design Award recipients are:

Richard Saul Wurman, FAIA, seeks ways to make the complex clear. Described by Fortune magazine as an “intellectual hedonist” with a “hummingbird mind,” he has written, designed and published 83 books on topics from health care to cartography and the 1984 Olympics. Wurman received his bachelor’s and master’s degrees in architecture from the University of Pennsylvania and is the creator of the term “information architecture.” His career has been especially wide-ranging, from working for Louis Kahn and Charles Eames to reinventing guidebooks. In 1962, he published the first comparative plans of the 50 major cities in the world, and in 1967 he published his first comparative statistical atlas of major American cities. He created and chaired the conferences TED (1984-2002), TEDMED (1995-2010) and eg (2006) and is currently developing the WWW conferences, celebrating improvised conversations. Under his direction of TED, innovations that were premiered include the first Mac in 1984, Illustrator and Photoshop by Adobe, the Segway and iBot by DEKA, OnStar by GM, Frank Gehry’s earliest sketches of Bilbao and even the first announcement of Google. Wurman also continues to work on his global cartographic initiative, 19.20.21.—an endeavor to standardize a methodology for understanding comparative urban data.

Janine Benyus is a biologist, innovation consultant and author of six books, including Biomimicry: Innovation Inspired by Nature. In 1998, Benyus cofounded Biomimicry Guild, the world’s first bio‐inspired consultancy, bringing nature’s sustainable designs to more than 250 clients, including Boeing, Nike, General Electric, Herman Miller, HOK, IDEO, Interface and Procter and Gamble. In 2006, Benyus cofounded Biomimicry Institute, home of AskNature, an online library of life’s best ideas. In 2011, she launched Biomimicry 3.8 to certify and nurture the growing network of biomimicry professionals. Benyus has received numerous awards, including the 2011 Heinz Award and was Time’s International 2007 Hero of the Environment.

Conceived by graduate students at the MIT Media Lab in 2001, Design that Matters is a nonprofit design company that partners with social entrepreneurs to design products that address basic needs in developing countries. Led by cofounder Timothy Prestero, more than 850 academic and professional collaborators have worked together to create dozens of product concepts, including a projector for nighttime adult literacy education in Africa, a low‐cost neonatal incubator using spare car parts and, most recently, a phototherapy device for treating newborn jaundice in Vietnam. Design that Matters’ award‐winning creations have captured the public’s attention through its innovative, human‐centered approach to product design.

Mack Scogin and Merrill Elam have worked together in architecture for more than 40 years. Founded in 1984, their Atlanta-based firm, Mack Scogin Merrill Elam Architects, has won international acclaim for work that ranges from a sleek factory for Herman Miller to the Lulu Chow Wang Campus Center for Wellesley College and commercial office space for Tishman Speyer Properties. It has been recognized with numerous awards and publications and has been shown at museums such as the Museum of Modern Art and the Walker Art Center.

In a career spanning almost 30 years as a designer, creative director, artist and educator, Rebeca Méndez has focused on critical reflection of visual communication practices around issues of organization, culture and identity. Méndez is a professor in the Design Media Arts department at University of California, Los Angeles. Since 1996, she has run a multidisciplinary studio based in Los Angeles, focused on design for art and architecture clients, including Frank Gehry, Thom Mayne and Bill Viola. Her work has been exhibited in venues such as the Centre Pompidou, San Francisco Museum of Modern Art and Cooper-Hewitt. The recipient of numerous awards, Méndez lectures widely around the world, including a TEDx Talk in 2011.

Thom Browne’s meticulous aesthetic is rooted in an American sensibility evocative of the late 1950s and early 1960s. Browne opened his doors in the fall of 2001, offering bespoke tailored clothing; he introduced ready-to-wear menswear in 2004 and womenswear in 2010. He designs the Black Fleece by Brooks Brothers collection for men and women as well as a line of men’s jewelry for Harry Winston. In 2009, Browne introduced the Moncler Gamme Bleu collection. He was named Menswear Designer of the Year in 2006 by the Council of Fashion Designers of America, Designer of the Year in 2008 by GQ magazine, and Most Influential Designer by WGSN.

Evan Roth is an interaction designer who visualizes, records and subverts transient, often unseen moments in public spaces, in popular culture and on the Internet. His approach takes inspiration from the free software movement and hacker ethos, leading to such notable pieces as Laser Tag, White Glove Tracking, a collaboration with Jay-Z on the first open-source rap video, and the Eye Writer a low-cost eye-tracking system originally designed for paralyzed graffiti artist Tempt1. Roth is cofounder of the Graffiti Research Lab and the Web-based, open-source Free Art & Technology Lab. His work is in the permanent collection of the Museum of Modern Art and has received numerous awards, including the Design Museum London’s Design of the Year.

Clive Wilkinson Architects is a distinguished architecture and design practice based in Los Angeles, which collaborates with clients to design and build creative communities. The practice has completed creative projects across the globe for clients such as Google, Nokia, 20th Century Fox and Disney, winning more than 75 awards in the process. In its work, the firm strives to connect people, shape relationships and empower organizations to produce invigorating forms of community. Wilkinson has been inducted into the Interior Design Hall of Fame, named a Master of Design by Fast Company magazine and a Pioneer of Design by the IIDA.

Stoss Landscape Urbanism is a Boston-based collaborative design and planning studio that operates at the juncture of landscape architecture, urban design and planning. The firm was established in 2000 by founding principal Chris Reed; Scott Bishop joined as associate principal in 2005. Stoss has distinguished itself for a hybridized approach rooted in infrastructure, functionality and ecology. The firm’s projects include The CityDeck in Green Bay, Wis.; Erie Street Plaza in Milwaukee; The Plaza at Harvard University in Cambridge, Mass.; and Bass River Park on Cape Cod, Mass. In 2010, Stoss became the first North American firm to win the Topos Landscape Award.

Scott Wilson is the founder and principal designer of the Chicago-based studio Minimal. A former design leader at Nike, Thomson Consumer Electronics, IDEO, Fortune Brands and Motorola, he has created some of the world’s most recognized consumer design icons, including the Kinect for Xbox 360 and TikTok and LunaTik watches for the iPod Nano. Equal parts visionary and entrepreneur, Wilson delivers disruptive yet thoughtful solutions to markets across a range of industries. His work has been recognized with more than 50 international design awards and has been exhibited at Cooper-Hewitt, the Museum of Modern Art and the Art Institute of Chicago.

The 2012 jury was composed of a diverse group of designers and educators from around the nation, including:

National Design Week, Oct. 13–21, aims to promote a better understanding of the role that design plays in all aspects of daily life. In addition to hosting a Teen Design Fair and Winners’ Panel, the program will reach school teachers and their students nationally, in the classroom and online, through Cooper-Hewitt’s Educator Resource Center (www.educatorresourcecenter.org). The site features more than 400 lesson plans aligned to national and state standards that demonstrate how the design process can enhance the teaching of all subjects and features discussion boards that provide a forum for educators to exchange ideas. The museum’s website also features the year-round “Design Across America” clickable map listing design-oriented events throughout the country.

The People’s Design Award, now in its seventh year, invites the public to express their views on what constitutes good design, whether an everyday object, a design classic or an architectural landmark, from Sept. 12 through Oct. 15. By logging on to www.cooperhewitt.org, users can browse and vote from the existing nominees or upload images to nominate a new work. The winning design will be announced Oct. 17 at the National Design Awards Gala.

Cooper-Hewitt, National Design Museum is the only museum in the nation devoted exclusively to historic and contemporary design. Founded in 1897, the museum has been a branch of the Smithsonian since 1967. The museum presents compelling perspectives on the impact of design on daily life through active educational programs, exhibitions and publications.