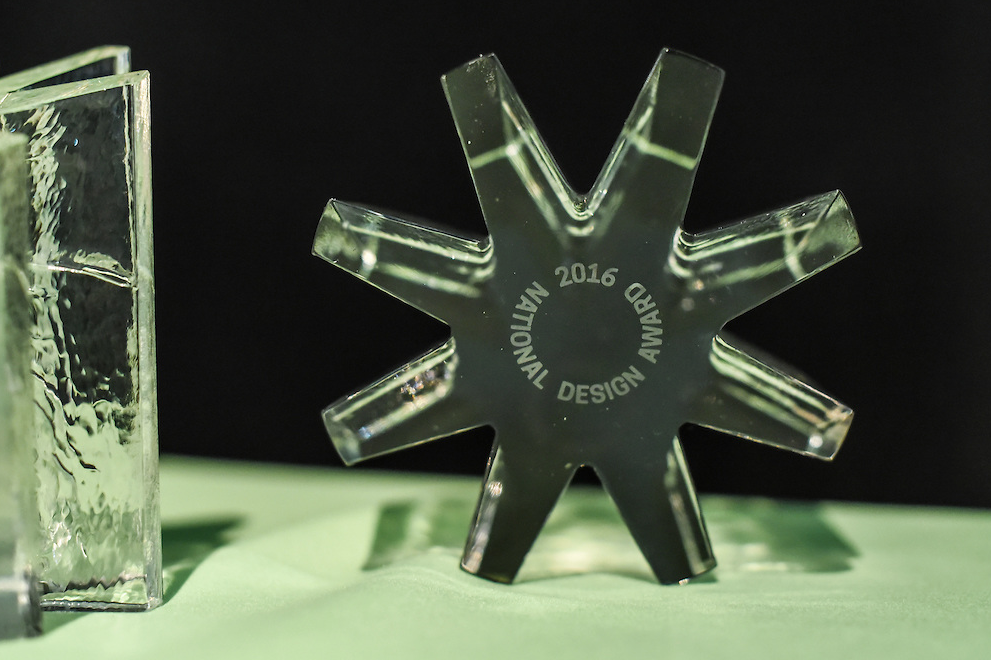 Cooper Hewitt, Smithsonian Design Museum has announced the winners of the 2017 National Design Awards, recognizing design excellence and innovation in 11 categories. Now in their 18th year, the annual awards promote design as a vital humanistic tool in shaping the world and are accompanied by robust educational programs. The award recipients will be honored at a gala dinner and ceremony Thursday, Oct. 19, at the Arthur Ross Terrace and Garden at Cooper Hewitt.

“In an era of tumultuous change, design is asking deep questions about its purpose and contributions to a better society,” said Caroline Baumann, director of Cooper Hewitt. “The achievements of this year’s class of National Design Award winners have informed that dialogue, and their accomplishments have elevated our understanding of what great American design is and what it can do to improve our world.”

Established in 2000 as a project of the White House Millennium Council, the National Design Awards are accompanied each year by National Design Week, which takes place this year Oct. 14–22. A variety of public education programs will be offered at the museum as well as across the country, including special events, panel discussions and workshops for students, teachers, corporate professionals, designers and Cooper Hewitt’s dedicated audience. Programs will be posted at cooperhewitt.org/events.

National Design Awards programming is made possible by major support from Target.

Additional funding is provided by Design Within Reach and Facebook.

National Design Award trophies are created by The Corning Museum of Glass. ndagallery.cooperhewitt.org is powered by Behance, part of the Adobe family. Media sponsorship is provided by Smithsonian Media.

Lifetime Achievement: Hartmut Esslinger
Hartmut Esslinger is an internationally renowned industrial designer now living in Los Gatos, Calif. The first designer to bring human-driven, high-touch design to the world of complex hardware and software technology, Esslinger founded frog design in his native Germany in 1969 and expanded it to the United States in 1982. Together with his partner and wife, Patricia Roller, he built the company into one of the world’s leading strategic design agencies. Esslinger has worked with prestigious global companies, including Sony, Apple, Louis Vuitton, SAP, Lufthansa and Microsoft, for whom he helped convert their technological competences and entrepreneurial desires into emotionally appealing global brands. Engaged in education since 1989, Esslinger is a founding professor of the Hochschule für Gestaltung in Karlsruhe, Germany, a DeTao professor at Fudan/SIVA University in Shanghai and was a professor with the ID2 Master Class at the University of Applied Arts, Vienna.

Director’s Award: Susan S. Szenasy
Susan S. Szenasy is the publisher and editor in chief of Metropolis, the magazine of design at all scales, having led the publication since 1986. For the past 45 years, Szenasy has contributed an unparalleled confluence of advocacy and ethics in positioning architecture and design as humanistic activities in contemporary culture. A respected authority on sustainability and design, Szenasy has been a board member of the Council for Interior Design Accreditation, Landscape Architecture Foundation and the NYC Center for Architecture Advisory Board. She has received two IIDA Presidential Commendations, is an honorary member of the ASLA and AIA-NYC and was recently awarded the ASID Honorary Fellowship and the Design for Humanity Award. She holds honorary doctorates from the Art Center College of Design, Kendall College of Art and Design, New York School of Interior Design and Pacific Northwest College of Art.

Design Mind: Craig L. Wilkins
Craig L. Wilkins is an architect, academic and author, recognized as one of the country’s leading scholars on African Americans in architecture. He is the former director of the Detroit Community Design Center and a lecturer at the Taubman College of Architecture and Urban Planning at the University of Michigan in Ann Arbor. Both his creative practice and pedagogy are informed by the long, rich, yet relatively untold stories of people of color in both the physical and symbolic construction of America. At multiple levels across diverse platforms, his award-winning books, chapters, essays and design interventions recover and present the rich social, cultural, political, historical and aesthetic contributions of oft-ignored people and practitioners of color for professional and public engagement.

Corporate & Institutional Achievement: Design Trust for Public Space
The Design Trust for Public Space is a nonprofit organization dedicated to the future of New York City. Founded in 1995 by Andrea Woodner to bring design expertise into the public realm, the Design Trust remains at the forefront of shaping New York City’s shared civic spaces and infrastructure—from streets, plazas and parks to transportation and housing. The Design Trust has executed 30 multi-year projects working with over 40 city agencies and community groups and 90 fellows. The organization’s projects saved the High Line structure and the Garment District, jump-started New York City’s first custom-built Taxi of Tomorrow and created the city’s first comprehensive sustainability guidelines that became the precursor to OneNYC.

Architecture Design: MASS Design Group
Founded in 2008, MASS Design Group is a design collaborative of 75 employees working in more than a dozen countries with offices in Boston and Kigali, Rwanda. With a portfolio that spans the fields of design, research, advocacy and training, MASS is committed to understanding the short- and long-term ripple effects made by architectural decisions at all scales—for inhabitants, clients, communities and societies. MASS’s practice focuses on architecture’s relationship to health and behavior, and on designing the human and physical systems necessary for growth, dignity and well-being. MASS believes that architecture is never neutral—that it either heals or hurts—and that a well-designed, beautiful world is a human right.

Communication Design: Jennifer Morla
Jennifer Morla established San Francisco-based Morla Design in 1984 as a multi-disciplinary studio and has since continued to pair wit and elegance on everything from motion graphics and branding to retail environments and textiles. Morla has created design programs for Levi’s, Design Within Reach and the Mexican Museum, San Francisco. She has been honored with over 300 awards of excellence in the field of visual communication, including the 2010 AIGA Medal. Her work is in the permanent collections of the Museum of Modern Art, the San Francisco Museum of Modern Art (SFMoMA) and the Smithsonian American Art Museum, and she has been the subject of solo exhibitions at SFMoMA and DDD Gallery in Kyoto. Morla lectures internationally and has taught at California College of the Arts for 23 years.

Fashion Design: Slow and Steady Wins the Race
New York-based designer Mary Ping founded Slow and Steady Wins the Race in 2002, following the launch of her eponymous collection in 2001. The work is a continuous investigation into the elements of what people wear, how they wear it and why. Each collection contains a commentary on the cultural anthropology of modern fashion, focusing on the fundamental characteristics of design within a wardrobe. Ping was inducted into the CFDA in 2007, and she is a winner of the Ecco Domani Award and UPS Future of Fashion. Her work is part of the permanent collections of the V&A Museum, The Museum at FIT, the RISD Museum, Deste Foundation and the Fondation d’entreprise Galeries Lafayette.

Interaction Design: Stamen Design
Stamen Design is an independent design and technology company founded by Eric Rodenbeck in San Francisco. Since 2001, Stamen has consistently innovated in interactive design, building beautiful, technically sophisticated projects for a diverse range of clients, including Digital Globe, the Dalai Lama, New York City, the World Health Organization, MTV and universities around the country. With a very public-centric approach in all its work, Stamen’s self-initiated projects, such as Field Papers, Stamen Maps and Mapstack, are open-source resources that increase access to and participation in digital design worldwide. Stamen has consistently moved the bar for data visualization and digital mapmaking to include the playful, the beautiful and the compelling. The studio’s work has been exhibited at biennials and museums worldwide, and is in the permanent collection of the Museum of Modern Art.

Interior Design: Deborah Berke Partners
Deborah Berke Partners is a New York-based architecture and interior design practice led by partners Deborah Berke, Maitland Jones and Marc Leff, and senior principals Stephen Brockman and Caroline Wharton Ewing. Together, they dissolve the boundaries between architecture and interior design by distilling complex considerations—environmental, social and aesthetic—to their essence. From visionary master plans to the focused details of interiors, Deborah Berke Partners works at all scales, with transformative outcomes. The firm’s most significant work includes the Distribution Headquarters for Cummins Inc. in Indianapolis; the Rockefeller Arts Center in Fredonia, New York; the interior architecture and design of 432 Park Avenue in New York City; 21c Museum Hotels across the U.S.; the Yale School of Art in New Haven, Conn.; and numerous residences for private clients.

Landscape Architecture: Surfacedesign
Surfacedesign is a landscape architecture and urban design firm based in San Francisco. Founded in 2001, the award-winning practice creates dynamic parks, plazas, waterfronts, civic landscapes and private gardens. James A. Lord, Roderick Wyllie and Geoff di Girolamo, in collaboration with a multidisciplinary team of landscape architects, urban designers and architects, provide innovative design solutions for a wide range of projects, including the Smithsonian Master Plan, Auckland International Airport, Golden Gate Bridge 75th Anniversary Plaza and IBM Plaza Honolulu. Integral to the philosophy of the practice, Surfacedesign focuses on cultivating a sense of connection to the built and natural world, pushing people to engage with the landscape in new ways.

Product Design: Joe Doucet
Joe Doucet is a designer, entrepreneur, inventor and creative director based in New York. After graduating from the Art Center College of Design, Doucet quickly began exporting his vision into product, furniture, environment and technology for a range of clients, including BMW, Braun, Hugo Boss, Lexon, Moët & Chandon and Target. His work deftly hybridizes function and visual appeal while conveying layers of meaning and message. Holding more than 50 patents, Doucet’s work has been exhibited globally, including in the London Design Museum and the Biennale International Design in Saint-Étienne. His recognitions include a World Technology Award for Design Innovation, numerous Good Design Awards and being named the only AvantGuardian for Design by Surface magazine.

Founded in 1897, Cooper Hewitt is the only museum in the United States devoted exclusively to historic and contemporary design. Housed in the renovated and restored Carnegie Mansion, Cooper Hewitt showcases one of the most diverse and comprehensive collections of design works in existence. The museum’s restoration, modernization and expansion has won numerous awards and honors, including a Lucy G. Moses Preservation Award from the New York Landmarks Conservancy, a Gold Pencil Award for Best in Responsive Environments and LEED Silver certification. Cooper Hewitt offers a full range of interactive capabilities and immersive creative experiences, including the Cooper Hewitt Pen that allows visitors to “collect” and “save” objects from around the galleries, the opportunity to explore the collection digitally on ultra-high-definition touch-screen tables, and draw and project their own wallpaper designs in the Immersion Room.

Cooper Hewitt is located at 2 East 91st Street at Fifth Avenue in New York City. Hours are Sunday through Friday, 10 a.m. to 6 p.m., and Saturday, 10 a.m. to 9 p.m. The Arthur Ross Terrace and Garden and Tarallucci e Vino cafe open at 8 a.m., Monday through Friday, and are accessible without an admissions ticket through the East 90th Street entrance. The museum is closed on Thanksgiving Day and Christmas Day. Public transit routes include the Lexington Avenue 4, 5 and 6 subways (86th or 96th Street stations), the Second Avenue Q subway (96th Street station), and the Fifth and Madison Avenue buses. Adult admission, $16 in advance via tickets.cooperhewitt.org, $18 at door; seniors, $10 in advance via tickets.cooperhewitt.org, $12 at door; students, $7 in advance via tickets.cooperhewitt.org, $9 at door. Cooper Hewitt members and children younger than age 18 are admitted free. Pay What You Wish every Saturday, 6 to 9 p.m. The museum is fully accessible.