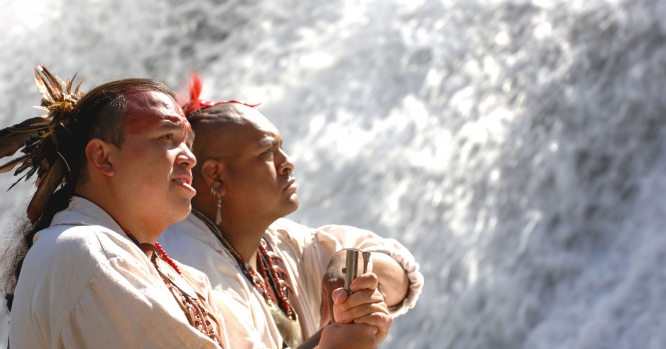 Hands-on activities in the imagiNations Activity Center will include making clay beads and medallions and corn-husk dolls. There will also be a storyteller and coloring sheets.

During the festival, the banner exhibition “Cherokee Women Who Changed the World” will be on display. It explores the impacts of women from the Cherokee Nation, Keetoowah Band of Cherokee Indians and Eastern Band of Cherokee Indians who have served as trailblazers in history. Being a traditionally matriarchal society, Cherokee people have often been at the forefront of women’s rights and promoting women’s education.

Making its debut in the Sealaska Gallery that same weekend, a new exhibition created by the Cherokee Nation, “Trail of Tears: A Story of Cherokee Removal,” will be on display through the end of 2018. The temporary installation takes a deeper look at Indian removal from the Cherokee perspective. This exhibition sets out to dispel misconceptions about the Trail of Tears and gives a realistic look at the devastating cost of greed and oppression.

The National Museum of the American Indian is committed to advancing knowledge and understanding of the Native cultures of the Western Hemisphere—past, present and future—through partnership with Native people and others. Located on the National Mall at Fourth Street and Independence Avenue S.W., the museum is open each day from 10 a.m. to 5:30 p.m. (closed Dec. 25). The museum is on Facebook, Twitter and Instagram, and at AmericanIndian.si.edu.