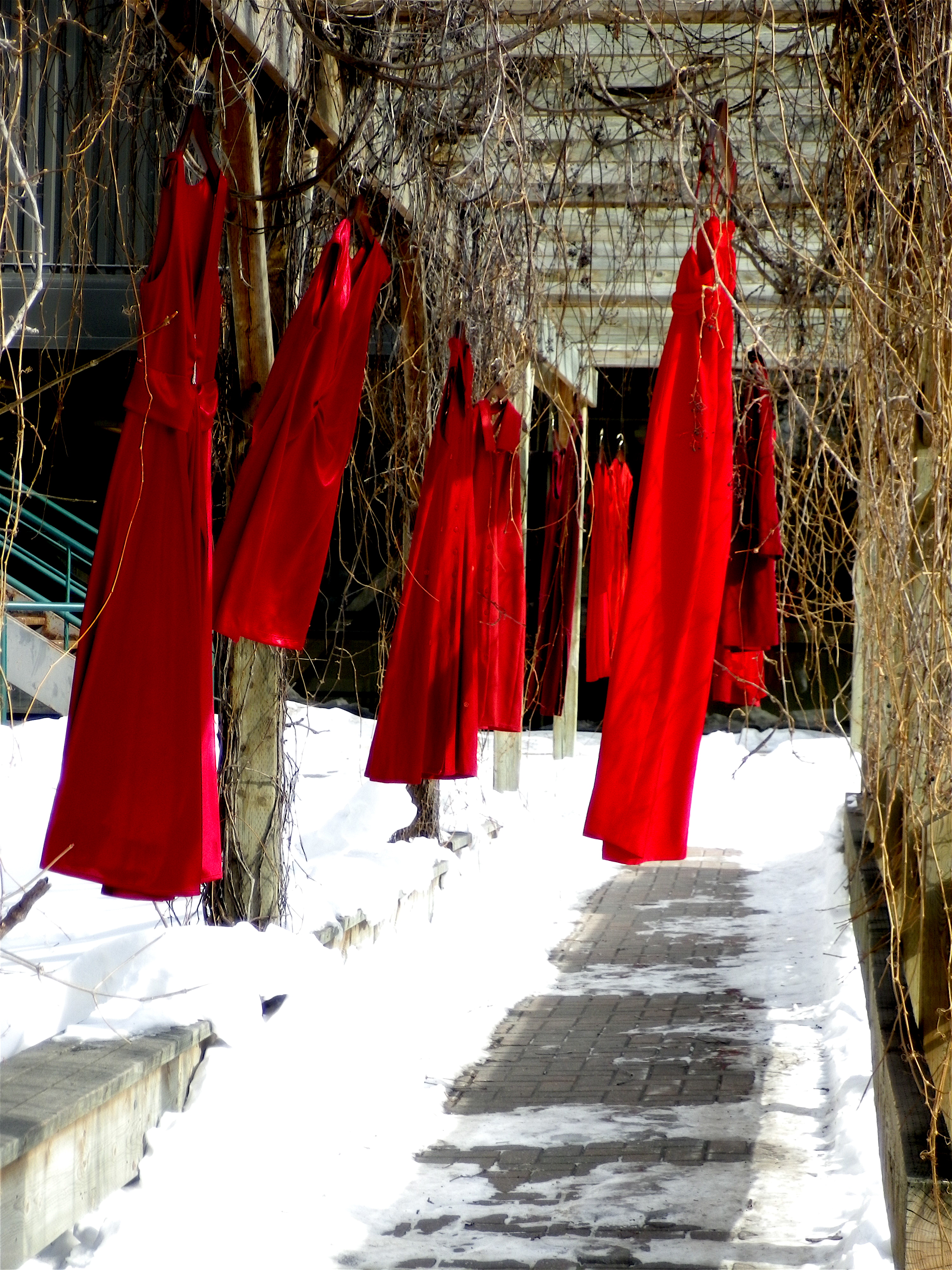 Throughout March, the Smithsonian’s National Museum of the American Indian celebrates the contributions Native women have made to the country and world through exhibitions, public programs, special tours and films. All events are free. Events are listed for the museum in Washington, D.C., and New York City.

The REDress Project, an outdoor art installation by artist Jaime Black (Métis), will be on view in the U.S. for the first time at the museum in Washington, D.C. Red dresses hung in public spaces symbolize the issue of missing or murdered Indigenous women. In her artwork, Black seeks to create dialogue around social and political issues, especially though an exploration of the body and the land as contested sites of historical and cultural knowledge. The REDress Project positions the Indigenous female body as a target of colonial violence. Black’s purpose is to draw attention to the gendered and racialized nature of violent crimes against Native women and to evoke a presence though the marking of absence. The dresses, collected through community donation, have been installed at several Canadian galleries, museums and universities since 2011. On view March 1–31 on the museum’s outdoor plaza.

“Safety for Our Sisters: Ending Violence Against Native Women” draws vitally needed attention to the pressing and pervasive issue of violence against Native women, who suffer disproportionally high levels of rape, domestic violence and attacks at the hands of strangers. The symposium, which takes place Thursday, March 21, from 2 to 5:30 p.m. at the Washington, D.C., museum’s Rasmuson Theater, explores the causes and consequences of this abuse and considers the social and legal issues involved in these acts of violence.

Sari Horwitz, a three-time Pulitzer Prize-winning reporter from the Washington Post will moderate the symposium. Horwitz is the author of the newspaper’s award-winning series “Justice in Indian Country.”

Symposium speakers include Sarah Deer (citizen of the Muscogee [Creek] Nation of Oklahoma), a lawyer and professor of women, gender and sexuality studies at the University of Kansas; Mary Kathryn Nagle (Cherokee Nation of Oklahoma), a partner at Pipestem Law P.C., where she specializes in federal Indian law and appellate litigation; Cherrah Giles (Muscogee), board chair of the National Indigenous Women’s Resource Center and an advocate for Native women and children; Marita Growing Thunder (Fort Peck Assiniboine Sioux Tribes), a student at the University of Montana who started the Save Our Sisters walk in 2017; and Jaime Black (Métis), a multidisciplinary artist based in Winnipeg, Canada, and the creator of The REDress Project.

The symposium has received support from the Smithsonian American Women’s History Initiative.

On Mondays, Wednesdays and Friday during March, cultural interpreters in the Washington, D.C., museum will lead a special Women’s History Month tour of the exhibition “Nation to Nation: Treaties Between the United States and American Indian Nation.” Called “Native Women Rising,” the tour highlights the untold histories and contemporary experiences of Native American women. The tour meets in the Potomac Atrium on the museum’s first level at 1:30 p.m.

“Aloha Lili‘uokalani” explores the music and the quilting created by the last sovereign monarch of Hawai‘i during her imprisonment after the kingdom was overthrown. Amy Stillman (Native Hawai‘ian), a professor of ethnomusicology at the University of Michigan, will sing the queen’s songs and discuss their impact during a period of political and cultural instability in Hawai‘i. The presentations take place March 9 and 10 in the Washington museum’s Potomac Atrium at     11:30 a.m. and 1, 2:30 and 4 p.m.

On March 22, the museum in Washington, D.C., will screen Warrior Women (2018) in its Rasmuson Theater at 7 p.m. Christina King (Seminole/Creek/Sac and Fox) and Elizabeth Castle directed the film.

In the 1970s, organizers of the American Indian Movement fought for Native liberation as a community of extended families. One leader, Madonna Thunder Hawk (O’ohe Nuŋpa Lakota) shaped a kindred group of activists’ children—including her daughter Marcy—into the “We Will Remember” Survival School as a Native alternative to government-run education. Together, Madonna and Marcy fought for Native rights in an environment that made them more comrades than mother and daughter. Today, with Marcy a mother herself, both women are still at the forefront of Native issues, fighting against the environmental devastation of the Dakota Access Pipeline and for Indigenous cultural values.

The film explores what it means to balance a movement with motherhood while also examining how activist legacies are passed down from generation to generation in the face of a government that has continually met Native resistance with mass violence.

In New York City, Native Cinema Showcase (March 29–31) celebrates the latest in Native films and offers audiences a preview of what is to come at the Santa Fe Indian Market in August 2019. This is the first year the showcase will be hosted in New York City, at the National Museum of the American Indian, located at One Bowling Green.

The museum’s showcase features three days of screenings, including the award-winning SGaawaay K’uuna/Edge of the Knife (2018; directed Gwaai Edenshaw [Haida] and Helen Haig-Brown [Tsilhqot’in]) and Warrior Women. The showcase also features other films created by Native women. A full schedule is available on the museum’s website.

The National Museum of the American Indian is committed to advancing knowledge and understanding of the Native cultures of the Western Hemisphere—past, present and future—through partnership with Native people and others. For information about the museums, including hours and directions, visit americanindian.si.edu. Follow the museum on social media at Facebook, Twitter and Instagram.