Letters and Photographs Give Insight Into Artists’ Muses and Models
May 6, 2014
News Release 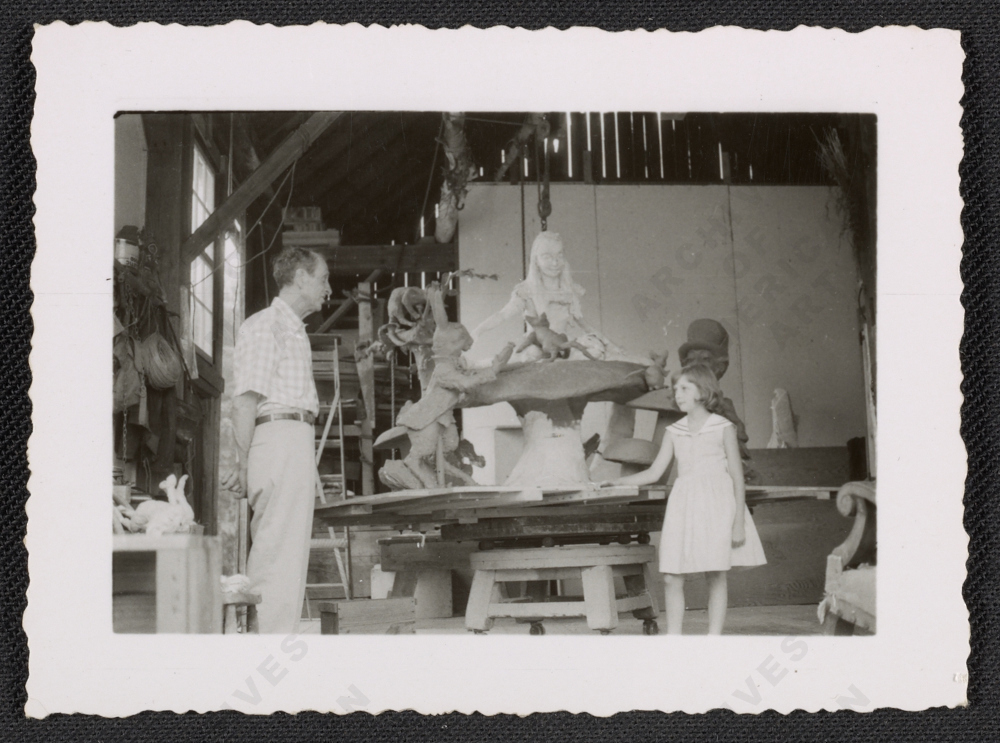 The model is essential to an artist’s training and education, though they are often given short shrift in art history. A new exhibition, “Artists and Their Models,” from the Smithsonian’s Archives of American Art, showcases more than 75 original letters, photographs, cards, sketches and interviews chronicling the interaction between artists and their models. The exhibition will be on view May 15 to Aug. 27 in the Lawrence A. Fleischman Gallery at the Smithsonian’s Donald W. Reynolds Center for American Art and Portraiture.

From recollections of artists to tales of rambunctious animal models and children who posed for their parents, the exhibition illuminates surprising facts behind the early use of models and reveals details behind the creation of celebrated American masterpieces.

“Artists and Their Models” includes the reminiscences of artist Worthington Whittredge who posed as George Washington for “Washington Crossing the Delaware,” as well as a fan letter to Alberto Vargas—famous for his “Vargas” pin-up girls—from an aspiring model with “a beautiful set of legs.” A memoir by Grant Wood’s sister Nan describes the harrowing tale of an animal model who posed with her in “Portrait of Nan.” Photographs documenting a special artist-and-model relationship between Jose de Creeft and his daughter Donna Maria, the sculptor and model for the well-known “Alice in Wonderland” sculpture in Central Park (1959), are also highlighted.

From a photograph of students at The Pennsylvania Academy of Fine Arts dissecting a cadaver to study anatomy, to a handwritten speech by painter Max Weber describing his experiences as a member of Henri Matisse’s first private class in 1908, the exhibition also details the use of models in the classroom.

Through the mid-20th century, nude modeling was considered a scandalous act, but not everyone shared that view. Included in the exhibition is a stinging letter from the president of the National Academy demanding an apology from Congressman Clifton A. Woodrum, who denounced the New Deal’s Works Progress Administration because artists involved with the program were keeping reference photographs of nude models on file. Florence Allen, an African American model from San Francisco who posed for Wayne Thiebaud, Mark Rothko and Diego Rivera, is also highlighted; she sought to professionalize the vocation of modeling as a founding member of the nation’s first independent union for models. Interview excerpts from Anton Kamp, who posed for John Singer Sargent as a young art student, and Elmer Bischoff, an important member of the Bay Area Figurative movement, and others will be made available through a mobile website.

“The story of the live model is not often told, but through these stories, extraordinary discoveries have been made of an artist’s work, artistic process and life,” said Kate Haw, director of the Archives of American Art. “For example, the typewritten memoir of Nan Wood gives us an inside perspective on the painter’s techniques, inviting us to look more deeply at images we might take for granted. These unique documents and images offer revealing insights into the drama, inspiration and relationships of artists and their models.”

There will be gallery talks June 20 at 4:30 p.m. and July 11 at 1 p.m. in the Lawrence A. Fleischman Gallery. The June 20 gallery talk immediately precedes “Drawing at Dusk!,” a program offering the opportunity to sketch from a live model in the Luce Center within the Donald W. Reynolds Center for American Art and Portraiture.

The Archives of American Art is the world’s preeminent resource dedicated to collecting and preserving the papers and other primary records of the visual arts in America. The collection includes 20 million original letters, photos, sketchbooks, diaries and films and audio recordings of artists, dealers, collectors and curators from the 18th century to the present. The Archives has been a leader in implementing new technologies to provide wider access of these valuable documents around the world.

The Lawrence A. Fleischman Gallery is located at the Smithsonian’s Donald W. Reynolds Center for American Art and Portraiture on Eighth and F streets, N.W. in Washington, D.C., and is open daily from 11:30 a.m. to 7 p.m. (closed Dec. 25). For more information, visit the Archives website.