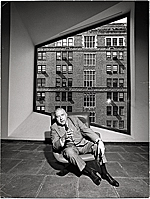 The Archives of American Art has contributed more than 1,350 digital images, representing nearly 1,000 documents, to the Marcel Breuer Digital Archive available online at breuer.syr.edu. Launched March 23 by Syracuse University Library, this resource represents a collaborative effort to digitize more than 30,000 drawings, photographs, letters and other materials related to the early career of Marcel Breuer, one of the most influential architects and furniture designers of the 20th century.

Rich metadata allows for easy searching and enables researchers to make connections across media and among geographically dispersed materials. High-quality, zoomable images permit even the faintest pencil sketch to be examined in detail, and descriptions of Breuer’s projects and biographies provide context for the individual objects and for Breuer’s career. The project unites resources from several international partner institutions, including the Smithsonian’s Archives of American Art, the Bauhaus-Archiv, Stiftung Bauhaus Dessau, the Eidgenössische Technische Hochschule Zürich, Harvard University, the University of East Anglia and the Vitra Design Museum.

The Archives of American Art’s contribution of digital images consists primarily of letters from Breuer to architects, designers and artists discussing his training and the execution of his hundreds of architectural projects and designs for furnishings, as well as letters received from Breuer’s mentor Walter Gropius. Invoices, writings, lecture transcripts and memorandum are also found. The documents were selected by Syracuse’s project team from the Breuer papers donated to the Smithsonian by Breuer’s widow, Constance, between 1985 and 1999. The papers, digitized by the Archives in 2005 from 32 reels of microfilm and available online at www.aaa.si.edu, span the years 1920 to 1986 and consist of biographical material, correspondence, business and financial records, interviews, notes, writings, sketches, project files, exhibition files, photographs and printed material that document Breuer’s career as an architect and designer.

Born in Pécs, Hungary, in 1902, Marcel Lajos Breuer achieved remarkable success as a student in the furniture workshop of the Bauhaus, leading Gropius to offer him a faculty position in 1925. That same year, he earned widespread critical acclaim for his tubular steel “Wassily” chair, which incorporated the radical simplicity of form and interest in industrial materials often espoused by the Bauhaus. After a brief but productive sojourn in England, Breuer followed Gropius to the United States and Harvard University in 1937. The two maintained a joint architectural firm in Cambridge, Mass., until 1941, when Breuer founded his own office.

Breuer helped to redefine post-war American domestic architecture through projects like the “bi-nuclear” house and the demonstration house in the garden of New York’s Museum of Modern Art (1949). He designed some 60 private residences by the mid-1950s, all of which are represented in the “Marcel Breuer Digital Archive.” The ensuing two decades witnessed some of his most well-known governmental and institutional projects, including the UNESCO headquarters in Paris (1958) and the Whitney Museum of Art in New York City (1966); the records related to these later projects will be digitized during the second phase of the project.

The Special Collections Research Center is a hub for primary-source research located at Syracuse University’s Bird Library. It is devoted to collecting and preserving rare research materials in all formats and to connecting students, faculty, outside scholars and the community to its collections. For more information, visit scrc.syr.edu.

The Archives of American Art is the world’s pre-eminent resource dedicated to collecting and preserving the papers and primary records of the visual arts in America. For more information, visit www.aaa.si.edu. This wholly redesigned website provides unprecedented access to online exhibitions, oral history transcripts, audio highlights, finding aids and guides, digital images and collections and other research services.