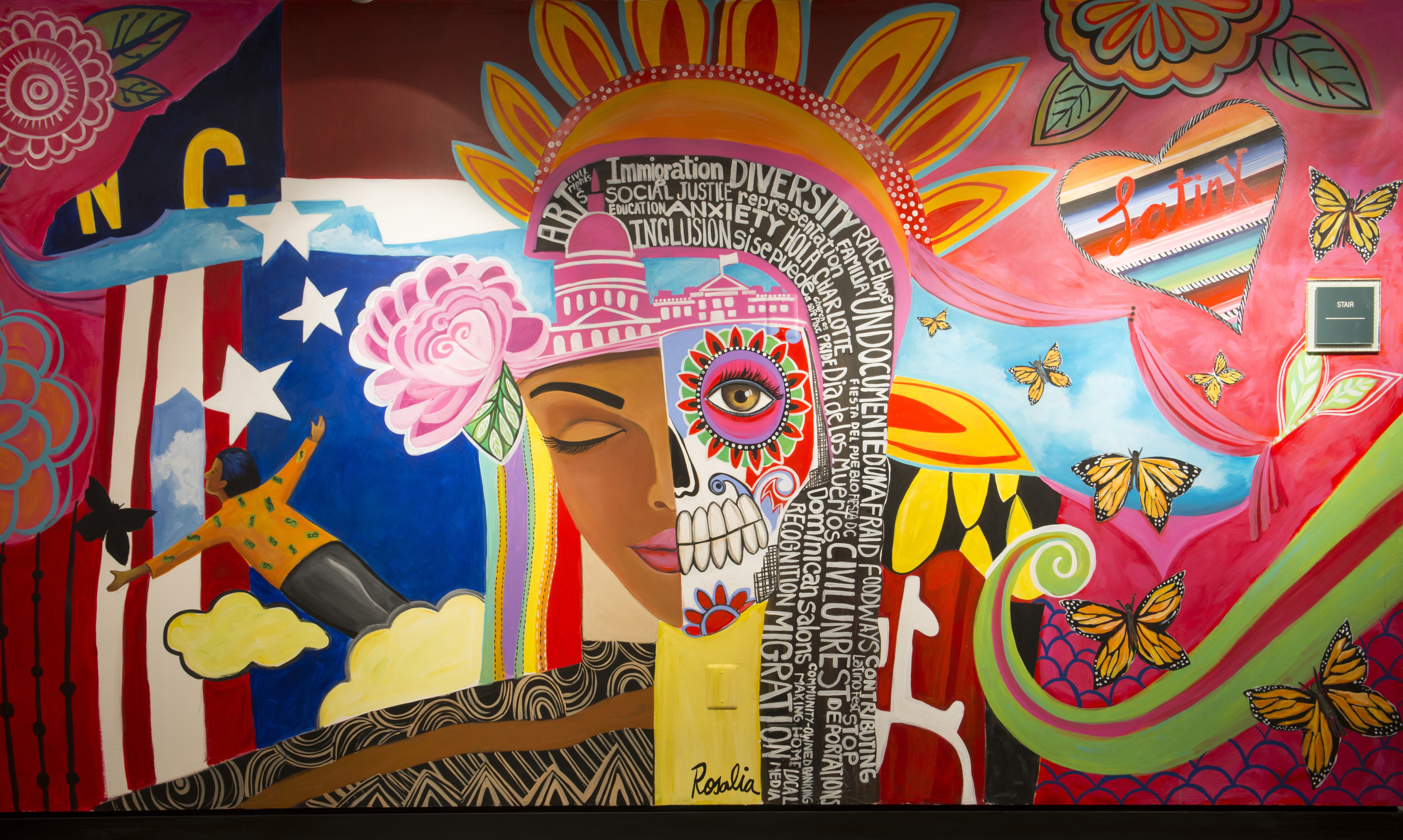 What do Washington, D.C., Charlotte and Raleigh-Durham, N.C., and Baltimore all have in common? They are all urban areas, are all on the east coast of the United States…and all have experienced rapid growth in their Latinx populations, most with spurts beginning as far back as 1980s—and with Washington leading the way as far back as the 1950s. “Gateways/Portales,” a new exhibition on view at the Smithsonian’s Anacostia Community Museum from now until Aug. 6, 2017, explores the triumphs and struggles of Latinx migrants and immigrants through the lenses of rights and justice, representation and celebration.

The term “gateways” is a metaphor for points of access into community life, and gateways are thematically incorporated in the design of this issue-based exhibition. Presented bilingually, the exhibition, curated by Latinx studies curator Ariana Curtis, also introduces the non-gender defining term “Latinx,” which is rapidly gaining usage in popular culture and replaces Latino and Latina in most of the English presentation.

“As we seek to represent diverse facets of urbans life, I welcome ‘Gateways’ and the timely subjects it presents,” said Lori Yarrish, acting director of the museum. “The powerful themes the exhibition addresses resonate with urban communities across the nation and is another example of our pioneering approach to museum work that we celebrate as we move next year into our 50th anniversary.”

“The largest non-white group in the U.S., Latinxs have accounted for half of the nation’s growth between 2000 and 2012,” Curtis said. “In the city pairs on which ‘Gateways’ focuses, migration from other states, immigration and U.S. births have caused the tremendous contemporary increase in the Latinx population.”

Over that period, black-majority cities Washington and Baltimore experienced Latinx population growth even though their general population declined, and Raleigh-Durham and Charlotte experienced hyper-growth with Latinx increases of over 300 percent.

Accessed through massive gateways, the exhibition features three major sections looking at life in the U.S. for Latinxs:

The opening section on social justice and civil rights looks at a variety of issues beginning with the complexities of how Latinxs self-identify and are identified institutionally, racial profiling and undocumented status, sanctuary cities and the tenuous relationships with law enforcement. Through art, interviews, images, video and objects of personal value, the stories of Latinxs’ struggles in new and sometimes unwelcoming communities in the four cities are told alongside examples of successful professional, entrepreneurial and homeownership pursuits.

“Despite the threat of deportation, some undocumented Latinx youth, as noted in the exhibition, hold higher education aspirations and accomplish goals typical of all immigrant groups; they are activists for immigrant and education reform,” said Curtis. “‘Gateways’ also documents the creation of Latinx-centered community institutions and service providers in the four cities often with the help of established African American business and individuals to address critical needs like banking and credit for workers who often carry large amounts of cash.”

Awareness of the power of political representation and recognition is evident in the second gateway section, which includes artifacts from the campaigns of the first Latinx-elected officials for a variety of city, county, state and federal offices along with notices promoting federally sanctioned Latinx heritage observances. Also highlighted is the establishment of tiendas (shops) and later Latinx-owned supermarket chains providing Latin American food and money-sending services.

Latinxs efforts to create communities can be seen in the establishment of churches, which also serve as sanctuaries; Spanish-language radio, newspaper and TV media; and hair salons and other basic services. Powerful Latinx creative expression, as seen throughout the exhibition, takes many forms—the mural and public art tradition in Baltimore, performing and visual arts in the District and storytelling in North Carolina are among the creative outlets Latinxs have explored in their new homes.

The third section focuses on the role festivals play as a source of cultural change, empowerment and as opportunities for remembrance of home through food, entertainment and education for Latinxs. As public displays of Latinx unity, diversity and visibility, the festivals featured in “Gateways” were born of activism and serve to affirm the Latinx presence in the communities in which they are held.

Offering a reflective moment in “Gateways,” the Kinard Gallery features images and the personal audio stories of 20 Latinxs from the four cities as they consider their journey to their urban homes.

“Hispanics, the New Italians,” 2015—Painting, an exhibition signature image, by Rosalia Torres-Weiner of the iconic Statue of Liberty stylized as a Latinx

“Gateways” is complemented by two smaller Latinx exhibitions currently on view: “The Backyard of Derek Webster’s Imagination” features a selection of the colorful sculptures created by the self-taught, Chicago-settled, Honduran-born artist from the museum’s permanent collection. “Bridging the Americas: Community and Belonging From Panama to Washington, D.C.” explores the personal experiences of Panamanians and Zonians living in and between the nation’s capital area and Panama.

“Gateways” received federal support from the Latino Initiatives Pool, administered by the Smithsonian Latino Center. Related programs are funded in part by the D.C. Commission on the Arts & Humanities, an agency supported in part by the National Endowment for the Arts.

Note to editors: Visit the museum website for the calendar of public programs associated with the exhibition.