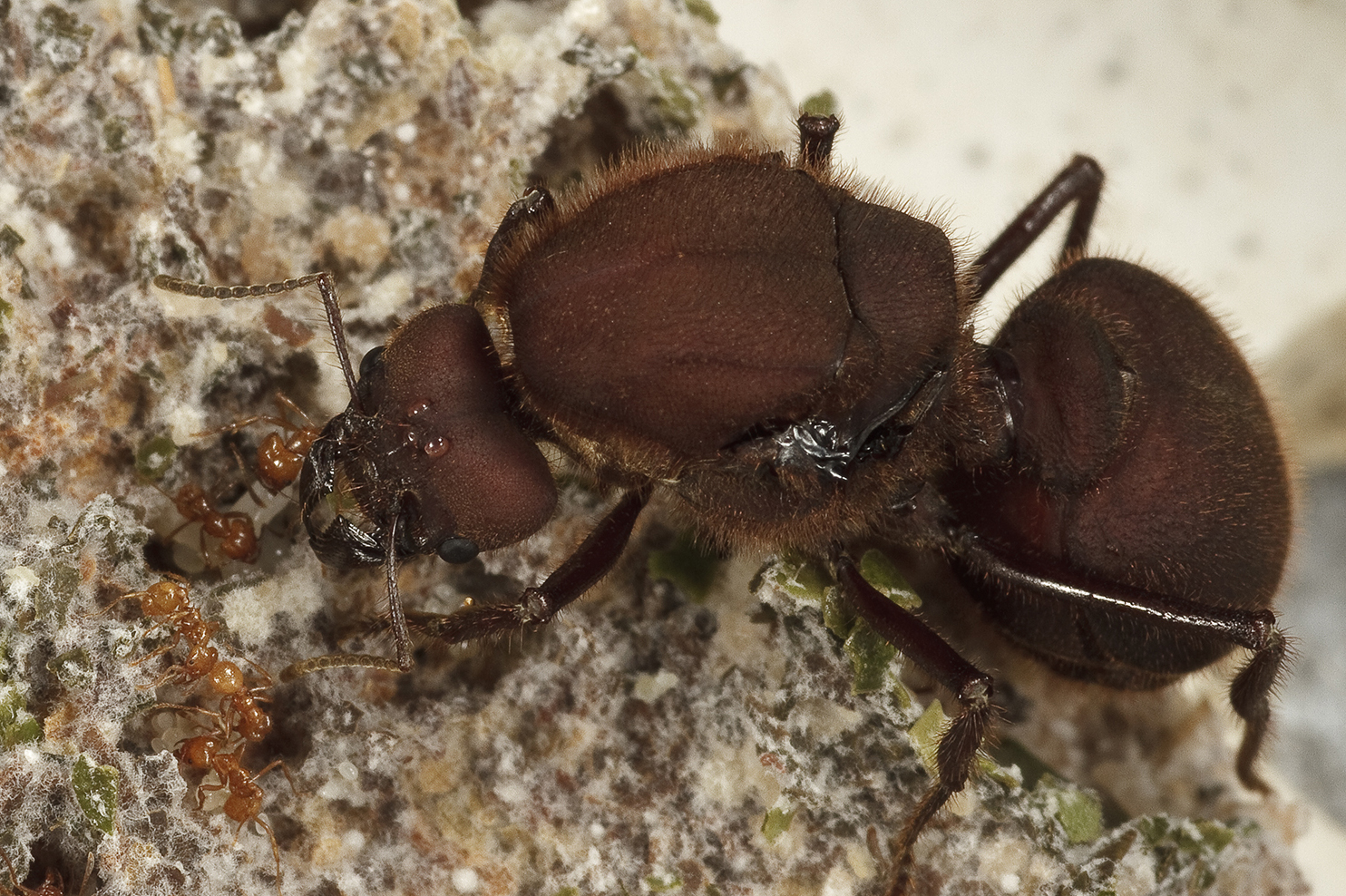 A group of South American ants has farmed fungi since shortly after the dinosaurs died out, according to an international research team including Smithsonian scientists. The genes of the ant farmers and their fungal crops reveal a surprisingly ancient history of mutual adaptations. This evolutionary give-and-take has led to some species—the leafcutter ants—developing industrial-scale farming that surpasses human agriculture in its efficiency.

The key chapters of the history of ant agriculture are written into the genes of both the insects and their crop fungi. A team including Jacobus Boomsma, research associate at the Smithsonian Tropical Research Institute and biology professor at the University of Copenhagen with his colleagues there, Sanne Nygaard and Guojie Zhang, looked at the genes of seven species of farming ants and their associated fungi to understand how the partnership developed. In a study published in Nature Communications, the scientists found that 55 to 60 million years ago ants belonging to the tribe Attini switched from a hunter-gatherer lifestyle to subsistence farming of fungi that grew on decomposing, woody plant matter. The slow-growing fungi sustained tiny colonies of ants, but it was the first step toward agriculture on a much larger scale.

“The ants lost many genes when they committed to farming fungi,” said Boomsma. This tied the fate of the ants to their food—with the insects depending on the fungi for nutrients, and the fungi increasing their likelihood of survival if they produced more nutritious crop. “It led to an evolutionary cascade of changes, unmatched by any other animal lineage studied so far.”

The researchers found that around 25 million years ago one lineage of fungus-farming ants began cultivating fungi that produced tiny, protein-rich bulbs that the ants preferentially harvested. More nutritious food supported larger colonies, spurring even more advances in ant-fungus co-evolution until, 15 million years ago, the leafcutter ants emerged. Leafcutter ant species cut and sow their underground farms daily with fresh, green plant matter, cultivating a fully domesticated species of fungus on an industrial scale that can sustain colonies with up to millions of ants.

Domestication changed both partners in the relationship. Unlike its ancestors and present-day wild relatives, the leafcutter ants’ fungus can no longer produce enzymes that digest woody plant matter, making it reliant on leafy greens brought in by the ants. In turn, the fungus produces fruiting bodies swollen with proteins essential for the ants’ growth. The ants have evolved special enzymes to easily digest this superfood and cannot eat anything else. Unable to survive without each other, the symbiotic leafcutters and their fungi nonetheless form the largest colonies of any of the fungus-farming ants. They work together as the dominant herbivores in Neotropical forests.

By contrast, humans began subsistence farming around 10,000 years ago, progressing to industrialized agriculture only in the past century. Put in human terms, Boomsma said, the leafcutter ants’ success is akin to people figuring out how to grow a single, all-purpose, disease-, pest- and drought-resistant superfood at an industrial scale, “by the time of the ancient Greek civilization.”

Much of the research on fungus-farming ants comes from scientists working in Panama through the Smithsonian Tropical Research Institute during the past 25 years. The new study is one of the first attempts at looking at the entire genetic makeup of both the ants and the fungi, instead of just a few selected genes of interest. Co-author Ted Schultz of the Smithsonian’s National Museum of Natural History said there is plenty more to discover. “Because our genome data from five ants and six fungi are publicly available, we hope additional researchers will study them in the years to come.”