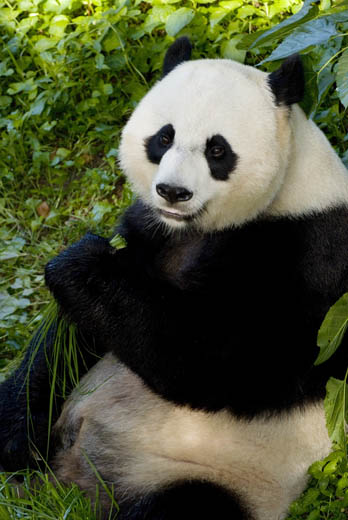 1972: Ling-Ling and Hsing-Hsing (Shing-Shing), the National Zoo’s first pair of giant pandas, arrived from China in 1972 as a gift to the American people to commemorate President Nixon’s historic visit to China.

During their 20 years together at the National Zoo, this panda pair produced five cubs; none of the cubs survived.

1983: After a decade of trial and error, Ling-Ling and Hsing-Hsing mated for the first time. Ling-Ling was also artificially inseminated with semen from Chia-Chia (Cha-Cha), a giant panda in London. On July 21, Ling-Ling gave birth to a male cub that died three hours later of pneumonia. Using DNA analysis, National Zoo scientists determined the cub was Hsing-Hsing’s.

1984 – 1989: The pair went on to produce four more cubs during this time. One cub was stillborn in 1984. Twins were born in 1987―one died quickly from a lack of oxygen and the other succumbed to an infection four days later. The last cub, born in 1989, died of pneumonia 23 hours after birth.

1983 – 1991: In addition to the five pregnancies, Ling-Ling also experienced many pseudopregnancies during this time.

1999:Hsing-Hsing, suffering from several debilitating, age-related diseases, including terminal kidney disease, was euthanized Nov. 28, 1999; he was 28.

2000: On Dec. 6, the National Zoo’s second pair of giant pandas, Mei Xiang (may-SHONG) and Tian Tian (tee-YEN tee-YEN), arrived in Washington, D.C. The pair is on loan for 10 years from the Chinese government in exchange for $10 million, raised from private donors, including Fujifilm, the Zoo’s lead corporate sponsor, and Animal Planet, the Zoo’s exclusive media partner.

2004: The pandas attempted to mate but did not. National Zoo scientists then vaginally inseminated Mei Xiang with Tian Tian's sperm during a non-anesthesia procedure. Mei Xiang had a pseudopregnancy.

2005: On March 11, National Zoo scientists and veterinarians artificially inseminated Mei Xiang, after it was determined no successful natural mating occurred between the pandas during the previous 24 hours. On July 9 at 3:41 a.m. Mei Xian gave birth to the Zoo’s first surviving panda cub—Tai Shan.

2007: On April 4 and 5, National Zoo scientists and veterinarians performed two artificial inseminations on Mei Xiang, using semen collected from Gao Gao, the adult male at the San Diego Zoo. The procedures were unsuccessful and Mei Xiang had a pseudopregnancy.

2008: On March 19, National Zoo scientists and veterinarians performed an artificial insemination on Mei Xiang, using semen from Tian Tian. The procedures were unsuccessful and it is believed that Mei Xiang experienced either a pseudopregnancy or the loss of a developing fetus.

2011: On Jan. 20, Dennis Kelly, director of the National Zoo, and Zang Chunlin, secretary general of the China Wildlife Conservation Association, signed a new Giant Panda Cooperative Research and Breeding Agreement. The agreement stipulates that giant pandas Mei Xiang and Tian Tian will remain at the Zoo until Dec. 15, 2015. If either giant panda were found to be unsuitable for breeding during the first two years of the new agreement then discussions would begin about the possibility of exchanging them for breeding pandas from China.

On July 21, National Zoo scientists confirmed that Mei Xiang had a pseudopregnancy.

On Dec. 19, the National Zoo announced that David M. Rubenstein donated $4.5 million to fund its giant panda program for the next five years. It also announced that if Mei Xiang and Tian Tian failed to produce a cub in the coming breeding season, it is possible that both or one of the bears would return to China.

2012: On April 29 and 30, Dr. Li Desheng of the China Conservation and Research Center for the Giant Panda, and a team of National Zoo reproductive physiologists and veterinarians artificially inseminated Mei Xiang, using semen from Tian Tian, collected and frozen in 2005, after attempts at natural breeding were unsuccessful.

On Aug. 20, National Zoo scientists confirmed that Mei Xiang’s urinary progesterone levels were rising. The Zoo live-tweeted an ultrasound Aug. 28, which was inconclusive, and several later ultrasounds were also inconclusive.

On Sept. 16, at 10:46 p.m. Mei Xiang gave birth to a cub. The panda team was able to confirm the birth from the noise the cub made following the birth.