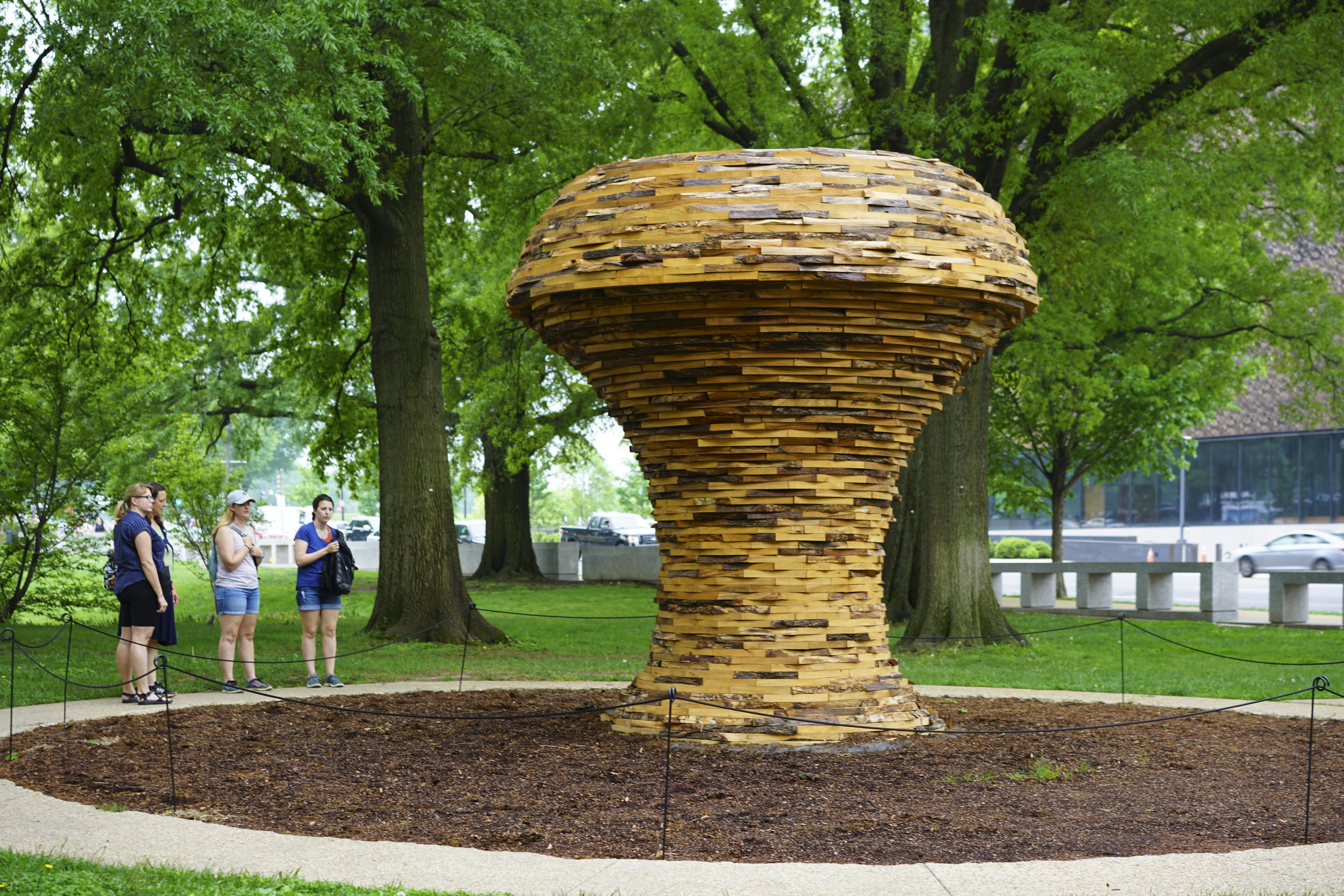 “Habitat” is Smithsonian Gardens’ first campus-wide exhibition. On display May 10­–December 2020, the series features 14 exhibits in outdoor gardens and indoor spaces across the Smithsonian campus. These exhibits explore the central theme of protecting habitats protects life, with each exhibit drawing on the themes of its particular museum.

For centuries, southern live oak trees have been a symbol of safety, strength and resilience. Their low, broad branches and plentiful acorns provide food and habitat for numerous species of plants, animals and insects. The trees also played an important role in the nation’s history. The Sheltering Branches exhibit outside of the National Museum of African American History and Culture illustrates how the live oak was a celebrated natural resource, harvested to build ships and used by African Americans as a place to gather, rest, read and reflect. Spanish moss and ball moss are arranged in the branches of five existing live oak trees on the museum’s grounds to illustrate the variety of organisms that depend on the live oak for protection.

Beneath the ground is a network of living organisms communicating with each other, and these invisible inter-species relationships help to support healthy habitats. The Life Underground exhibit addresses the interconnection of species found in a habitat through the lens of mushrooms, which can grow from virtually every habitat and often form vast networks of interlocking strands linking plants to one another. This exhibit, outside of the National Museum of American History, features a sculpture called “Mushroom” from local artist Foon Sham. The large mushroom made from linked wooden blocks symbolizes the complex symbiotic relationships between seemingly unrelated organisms in a habitat.

The Dead Wood Is Life exhibit outside of the National Museum of American History addresses the critical role dead wood plays in habitats. Standing dead trees and fallen debris provide microhabitats and a source of nutrients for a multitude of living organisms and play an important role in carbon storage and soil stability. An amazingly high percentage of woodland wildlife depends on this component of the forest ecosystem. In this exhibit, a series of six wood arches created by local artist Foon Sham, titled “Arches of Life,” leads visitors through the Woodland Garden to the Victory Garden. It highlights the crucial practice of letting logs lie where they fall.

Native wildflowers attract the beneficial bugs that pollinate vegetable gardens, orchards and croplands, making pollinators crucial to producing the food humans eat. We Need You!, located in the Victory Garden outside of the National Museum of American History, highlights these pollinators and native flowers. The exhibit features a sculpture titled Vascular Form XI, Unbound by artist Foon Sham.

Birds’ nests provide physical protection, camouflage from predators and a method for regulating the temperature of eggs. Typically hidden or high up in trees for protection, nests are not often on display for the public. Located in the Urban Bird Garden next to the National Museum of Natural History, the Nests exhibit highlights the diversity of spaces where birds live and raise their young, using large-scale realistic nests to draw attention to this habitat that often goes unseen.

Insects are everywhere and play a vital role in ecosystems. They need homes just like any other organism, but many habitats are being destroyed due to human interference and urban sprawl. Insects make their homes everywhere, using a wide range of materials of different sizes, shapes and texture. The Bug B&B exhibit in the Pollinator Garden adjacent to the National Museum of Natural History features several wooden frames filled with a variety of natural materials collected by Smithsonian Gardens as a place for insects to nest and raise their young. These larger-than-life insect figures illustrate the importance of providing insects with diverse natural materials to build their own “B&Bs.”

Biomes: Life in the Balance

Plants and animals have adapted to survive in specific biomes—communities of plants and animals that occupy distinct regions, such as tropical rain forests, grasslands and deserts. Biomes: Life in the Balance, an indoor exhibit located in the S. Dillon Ripley Center, explores the characteristics and features of biomes found in North America and the importance of conserving these diverse ecosystems. Landscape vignettes illustrate the differences between biomes, including plant and animal adaptations to ecosystems and human activities. The exhibit features aquatic biomes, desert biomes, grassland biomes, tundra biomes and temperate rainforest biomes.

The three exhibits in the Enid A. Haupt Garden: Key to the Forest, Sign of the Dragonfly and Foundation of the Sea, all explore different concepts in conservation. These exhibits highlight the work Smithsonian scientists are doing around the world to promote biodiversity and save endangered species, and explore some of the many tools they use to do their work.

Key to the Forest

A keystone species is a plant or animal that others in an ecosystem largely depend on and is essential for maintaining the number and diversity of other species in a habitat. Without keystone species, entire ecosystems could cease to exist. The Key to the Forest exhibit, in the West Terrace of the Enid A. Haupt Garden, illustrates how a single keystone species can play a critical role in the health and functioning of an ecosystem. The exhibit highlights the importance of the fig as a keystone species, which thanks to its abundant year-round fruiting, sustains many species when other fruit is not available.

Scientists monitor certain species of plants and animals, known as indicator species, to gauge the health of an ecosystem. The Sign of the Dragonfly exhibit, located in the Moongate Garden adjacent to the Arthur M. Sackler Gallery of Art, focuses on one of the oldest indicator species—the dragonfly. Dragonflies are easily recognized and need clean water to thrive, making them the perfect indicator species for wetlands. The exhibit features large-scale models of dragonflies mounted in a water feature to illustrate the importance of indicator species and how conservationists study these species and their ecosystems.

Foundation of the Sea

Habitats are defined as an ecological or environmental area inhabited by certain species of organisms, but sometimes organisms are the habitat. These organisms are referred to as foundation species, and they are fundamental to the structure and resilience of ecosystems. The Foundation of the Sea exhibit explores the importance of coral reefs as a foundation species and spotlights issues affecting the health of coral reefs, which provide habitat for one in four marine animals, but only grow 1 to 2 centimeters a year. The exhibit takes the form of a fanciful “coral” reef of succulent plants and sculptural fish displayed on a floating platform within the waterfall feature of the Fountain Garden adjacent to the National Museum of African Art.

All creatures prefer to live where amenities and resources are close and plentiful. Gardens that include decaying debris, native plants and sources of water provide the resources necessary to create habitat homes. The Homes exhibit in the Mary Livingston Ripley Garden features different types of structures that animals call home, from birdhouses to bee condos and insect habitats. The exhibit illustrates how gardens can be both beautiful and functional, providing homes for the organisms that bring it to life, and encourages gardeners to choose plants that provide food sources and are good places for young to be raised.

Monarchs on the Move

With their distinctive orange and black wings, monarchs are one of the most recognizable butterfly species in the world. They also have one of the longest migration patterns of any insect, travelling about 3,000 miles every fall. The Hirshhorn Museum and Sculpture Garden along Jefferson Drive is a certified Monarch Waystation—a place where monarchs can stop and feed on their long journeys north and south. Visitors can enjoy the beauty of the garden and its frequent monarch visitors.

For centuries, people have drawn inspiration for innovations in flight from the natural world. For example, the Wright Brothers observed birds to determine how they handled fluctuating air currents. The twisting of turkey vultures’ wings during flight provided the guiding principle for the pilot to control flight operation in the Wright Flyer. The Habitat of Flight exhibit at the National Air and Space Museum explores the importance of wildlife to the science of flight. It highlights habitat features that ensure the survival of birds, insects and other wild creatures and how critters and plants have inspired inventions in flight. The exhibit also includes tables and chairs for visitors to enjoy the space on the museum’s north terrace.

More than 33,000 plants and approximately 150 species can be found throughout the landscape at the National Museum of the American Indian. These plants are native to the Piedmont region between the Atlantic coastal plan and the Appalachian Mountains. The grounds encompass four habitats: upland hardwood forest, wetland, cropland and meadow. 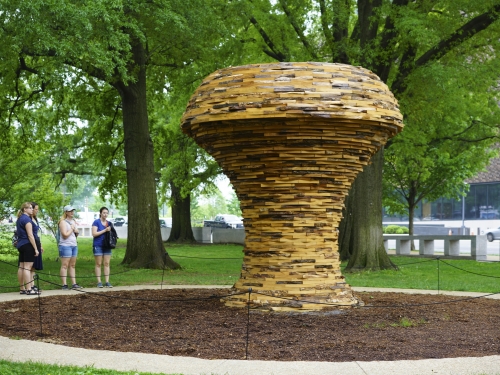 "Habitat" by Smithsonian Gardens
Media Kit
Back to Top