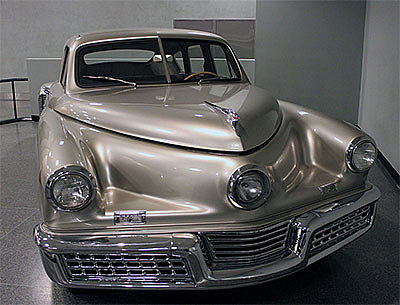 Preston Tucker (1903-1956), an automotive engineer who helped design Miller racing cars before World War II, almost realized his ambition of producing a "completely new" passenger automobile after the war. He and his business associates leased a former Dodge aircraft plant in Chicago for this purpose. Fifty-one nearly identical Tucker automobiles, designed by Tucker, Alex Tremulis, and J. Gordon Lippincott and Company, were built in 1948 before the Tucker Corp. became embroiled in fraud allegations.

The Tucker never entered full production, but its design epitomized automotive trends that were new and significant in the immediate postwar years: avant-garde styling, innovative mechanical features, awakening interest in passenger safety, and efforts by small manufacturers to capture a larger share of the new car market. The Tucker was an exaggeration of these trends and evidence that the desire for change was strong enough to move some fairly radical ideas from the drawing board to the production stage.

The car shown here passed through numerous owners and had been repainted and reupholstered. It was seized in 1992 by the U.S. Marshals Service following a narcotics investigation by the Drug Enforcement Administration and transferred to NMAH the next year.