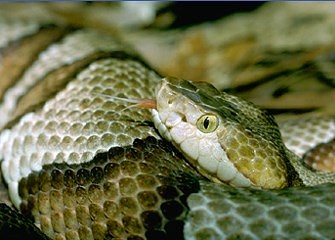 The Reptile Discovery Center celebrates the diversity, beauty and unique adaptations of more than 70 reptiles and amphibians. See one of the longest-lived residents at the Zoo—an Aldabra tortoise, estimated to be more than 100 years old. Catch a glimpse of the Panamanian golden frog, an amphibian that is extinct in the wild due to the deadly chytrid fungus. Try to spot the venomous gaboon viper, which has the longest teeth of any snake, measuring up to two inches. Because many of the animals are naturally camouflaged, Zoo volunteers are stationed around the exhibit to point out where animals are “hiding” to visitors.

At the Jewels of Appalachia exhibit, visitors can peer into the underground world of salamanders and learn about how these tiny creatures are critical to an entire ecosystem, as well as what Smithsonian Conservation Biology Institute (SCBI) scientists are doing to save them. In the research lab, visitors can catch a behind-the-scenes look at the Zoo's salamander science, which measures the effects of climate change and other environmental stressors on salamanders.

Unlike some of the Zoo's other animals, the inhabitants of the Reptile Discovery Center won't be found outside during the wintertime. These ectothermic (cold-blooded) creatures rely on the temperature of their surrounding environment to maintain their body temperature, so they can’t withstand the cold, wintry weather.