Men of Change: Taking it to the Streets 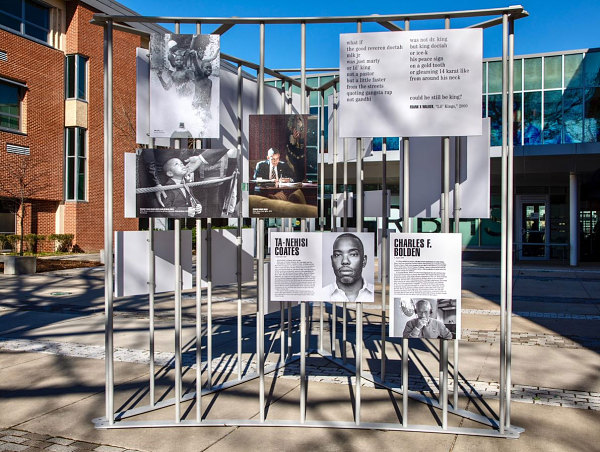 Men of Change: Taking it to the Streets presents a nation’s story through the profiles of revolutionary African American men and the cultural stories they illuminate. Formerly slated to open in its gallery, the exhibition has been creatively reimaged for outdoor installation in the District of Columbia’s Ward 7 Deanwood neighborhood to be accessible to the community as a safer response to Covid-19.

In heralding the contributions of notable African American men from across the decades, Men of Change highlights deep parallels between the past and present. While they made their mark in a variety of disciplines—politics, sports, science, entertainment, business, religion, and more all understood the value of asserting their own agency by owning their own stories.

The Taking it to the Streets version effectively breaks down the physical barriers between the museum and potential new audiences. It creates a striking and uplifting presence on the two-block area in Deanwood anchored by the Deanwood Recreational Center and Ron Brown High School, partners on the exhibition project. The exhibition’s home in Deanwood, and its connection with a school for African American boys striving to become changemakers, amplifies the significance of the experience.

Over the exhibition run, spontaneous projections will take place throughout Ward 8 in Washington, D.C., extending the reach of the exhibition’s impact.

Please check out the ACM’s website for information about upcoming programs, and the Men of Change: Power. Triumph. Truth. website to learn more about the traveling exhibition from the Smithsonian Institution Traveling Exhibition Service

Meet the Men of Change:

The presentation of Men of Change: Taking it to the Streets is organized by the Smithsonian’s Anacostia Community Museum and the Smithsonian Institution Traveling Exhibition Service (SITES). It’s based on the SITES traveling exhibition Men of Change: Power: Triumph. Truth. which was made possible through the generous support of the Ford Motor Company Fund and Community Services.

Men of Change: Taking it to the Streets is supported by the DC Commission on the Arts and Humanities and the Smithsonian Women’s Committee. Media sponsorship is provided by the Washington Informer Newspaper.

Many thanks to our partners at Ron Brown High School, Deanwood Recreation Center, and the Deanwood Citizens Association—without whom this reimagined exhibition would not be possible.