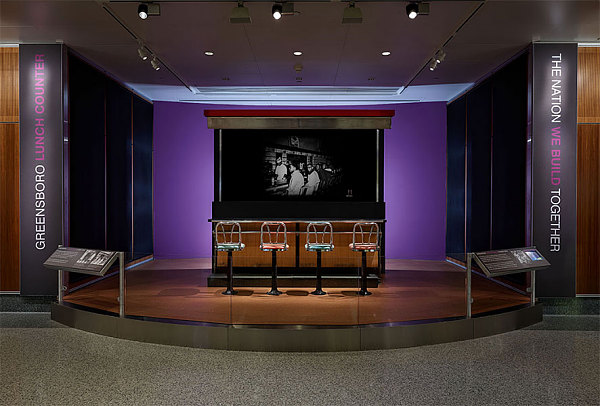 Racial segregation was still legal in the United States on February 1, 1960, when four African American college students sat down at this Woolworth counter in Greensboro, North Carolina. Politely asking for service at this “whites only” counter, their request was refused. When asked to leave, they remained in their seats. Their sit-in drew national attention and helped ignite a youth-led movement to challenge inequality throughout the South.

In Greensboro, hundreds of students, civil rights organizations, churches, and members of the community joined in a six-month-long protest. Their commitment ultimately led to the desegregation of the F. W. Woolworth lunch counter on July 25, 1960. Ezell A. Blair Jr. (now Jibreel Khazan), Franklin E. McCain, Joseph A. McNeil, and David L. Richmond were students enrolled at the North Carolina Agricultural and Technical College when they began their protest.

Protests such as this led to the passage of the Civil Rights Act of 1964, which finally outlawed racial segregation in public accommodations.

The closing of the Greensboro Woolworth's in 1993 presented Museum curators with the opportunity to acquire this historic artifact. After extensive negotiations with Woolworth's executives and representatives of the local community, a small section of the lunch counter was donated to the Smithsonian.