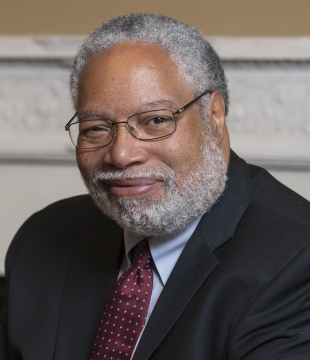 Secretary of the Smithsonian Institution

Lonnie G. Bunch III is the 14th Secretary of the Smithsonian. He assumed his position June 16, 2019. As Secretary, he oversees 21 museums, 21 libraries, the National Zoo, numerous research centers and several education units and centers. Two new museums—the National Museum of the American Latino and the Smithsonian American Women’s History Museum—are in development.

Previously, Bunch was the director of the Smithsonian’s National Museum of African American History and Culture. When he started as director in July 2005, he had one staff member, no collections, no funding and no site for a museum. Driven by optimism, determination and a commitment to build “a place that would make America better,” Bunch transformed a vision into a bold reality. The museum has welcomed more than 8 million visitors since it opened in September 2016 and has compiled a collection of 40,000 objects that are housed in the first “green building” on the National Mall. In 2019, the creation of the museum became the first Smithsonian effort to be the topic of a Harvard Business Review case study.

Occupying a prominent location next to the Washington Monument, the nearly 400,000-square-foot National Museum of African American History and Culture is the nation’s largest and most comprehensive cultural destination devoted exclusively to exploring, documenting and showcasing the African American story and its impact on American and world history.

Before his appointment as director of the museum, Bunch served as the president of the Chicago Historical Society (2001–2005). There, he led a successful capital campaign to transform the Historical Society in celebration of its 150th anniversary, managed an institutional reorganization, initiated an unprecedented outreach initiative to diverse communities and launched a much-lauded exhibition and program on teenage life titled “Teen Chicago.”

A widely published author, Bunch has written on topics ranging from the Black military experience, the American presidency and African American History in California, diversity in museum management and the impact of funding and politics on American museums. His most recent book, A Fool’s Errand: Creating the National Museum of African American History and Culture in the Age of Bush, Obama, and Trump, chronicles the making of the museum that would become one of the most popular destinations in Washington.

Bunch has worked at the Smithsonian in the past, holding several positions at its National Museum of American History from 1989 through 2000. As the museum’s associate director for curatorial affairs for six years (1994–2000), he oversaw the curatorial and collections management staff and led the team that developed a major permanent exhibition on the American presidency. He also led the team that developed “Smithsonian’s America” for the American Festival Japan 1994; this exhibition, which was presented in Japan, explored the history, culture and diversity of the United States.

Bunch served as the curator of history and program manager for the California African American Museum in Los Angeles from 1983 to 1989. While there, he organized several award-winning exhibitions, including “The Black Olympians, 1904–1950” and “Black Angelenos: The Afro-American in Los Angeles, 1850–1950.” He also produced several historical documentaries for public television.

Among his many awards, he was appointed by President George W. Bush to the Committee for the Preservation of the White House in 2002 and reappointed by President Barack Obama in 2010. In 2019, he was awarded the Freedom Medal, one of the Four Freedom Awards from the Roosevelt Institute, for his contribution to American culture as a historian and storyteller; the W.E.B. Du Bois Medal from the Hutchins Center at Harvard University; and the National Equal Justice Award from the NAACP’s Legal Defense Fund. In 2021, the Society of American Historians awarded Bunch the Tony Horwitz Prize honoring distinguished work in American history of wide appeal and enduring public significance. In addition, he received the David McCullough Award for outstanding work in Public History, the Lifetime Achievement Award from both the American Alliance of Museums and the African American Association of Museums, and the Chairman’s Award of the Congressional Black Caucus.

In 2020, he was given the Dan David Prize from Tel Aviv University. In 2021, Bunch received France’s highest award, The Legion of Honor.

Bunch received his undergraduate and graduate degrees from the American University in Washington, D.C.