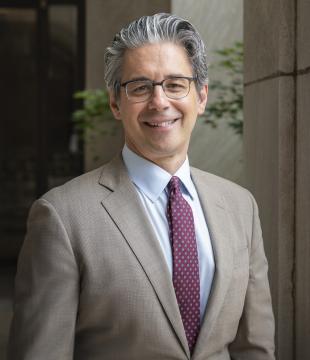 Chase F. Robinson is the Dame Jillian Sackler Director of the Arthur M. Sackler Gallery and Freer Gallery of Art at the Smithsonian. He joined the museums in December 2018.

Together, the Freer and Sackler comprise the Smithsonian’s national Asian art museums with a total of more than 41,000 works objects ranging from the Neolithic to the present day, including Islamic art, Chinese jades, bronzes and paintings, and the art of the ancient Near East as well as masterworks from Japan, ancient Egypt and South and Southeast Asia. As director, Robinson oversees 115 full-time employees and manage an annual operating budget of $23 million.

Previously, Robinson was the president of The Graduate Center of the City University of New York (CUNY) and distinguished professor of history. Robinson, a highly regarded scholar of Middle Eastern history and culture, has served in leadership roles at The Graduate Center for a decade. He served as provost and senior vice president from 2008 until 2013, when he was appointed president.

During Robinson’s tenure as president, The Graduate Center made major investments in the interdisciplinary humanities, social sciences and experimental sciences, and established itself at the forefront of digital learning and teaching. He recruited distinguished faculty, including the Center’s first Nobel laureate, put in place partnerships with a variety of institutions in the U.S. and abroad—most recently with the American University in Beirut.

A scholar of Islamic history and culture, Robinson has authored or edited nine books and more than 40 articles that span the geographical and chronological breadth of the pre- and early-modern Islamic Middle East. A recent book, Islamic Civilization in Thirty Lives: The First 1,000 Years (2016) was translated into Arabic and Portuguese. His most recent work is The Works of Ibn Wadih al-Ya’qubi: An English Translation (2017), a co-edited, three-volume set of translations of some of the earliest works of history and geography in Arabic.