The keeping of the Star-Spangled Banner: A story of emblematic resilience

Today, more than two centuries old, the flag remains a symbol of durability despite damage, explains Jennifer Jones, a curator who oversees the Star-Spangled Banner exhibition at the Smithsonian’s National Museum of American History.  What became apparent is that through the perseverance of an impassioned team of conservators during 10 years–from 1998 to 2008–the Star-Spangled Banner at the Smithsonian is now a cleaner, more authentic version of itself than it once had become. By setting it free of 1.7 million conservation stitches placed in the early 1900s, it is now stronger and yet, more graceful. By bringing it down to eye-level, it appears more massive. By moving it from the atrium to a darkened chamber, it is notably more vibrant than ever, the dim lights revealing the flag’s distinctive historic wounds in the same way the scars of both age and injury help tell the unique stories of the citizens it represents.

When 19th-century flag-maker Mary Pickersgill huddled over yards of red, white and blue British wool to create what would one day be known as the Star-Spangled Banner, it was only the first of many times the flag would be meticulously assessed, inch by inch. Pickersgill’s original handy work from the summer of 1813 was commissioned by Lieutenant Colonel George Armistead, commander of Baltimore’s Fort McHenry during the War of 1812. Armistead ordered from Pickersgill an oversized garrison flag of 30 by 42 feet, a flag “so large that the British could not fail to see her,” according to Jennifer Jones, curator of Military History for the National Museum of American History.

Pickersgill’s garrison flag was flown from the fortification’s flagpole, 90-feet-high, in the year leading up to the decisive Battle of Baltimore in September 1814, during which the British attempted–and failed–to overtake American forces. Aboard a truce ship in the harbor among the British fleet, American lawyer Francis Scott Key witnessed the battle and wrote his famous homage to the flag that he spotted in the distance, still flapping defiantly from the top of Fort McHenry’s flagpole as the British forces withdrew.

Unlike the relics of today–so often recognized for their value almost instantly–the Star-Spangled Banner at the time remained a working flag after the epic battle, according to Jones.

“Technically, the flags get used by the fortification until they’re no longer usable, so that flag had actually been repaired a number of times by Pickersgill and her seamstresses. It had gone back to her a couple of times for patches and sewing up of the frayed ends on the fly edge.”

Once the flag was finally retired, it stayed with the Armistead family for generations, during which time, small pieces of the flag began to go missing, cut off as souvenirs and tokens of gratitude on behalf of the Armistead family. One key missing piece–a lesser-known national mystery with big screen potential–is an entire cotton star, completely cut out from the center of the flag. What happened to it, curators wish they knew.

“We know that star was missing in that first photograph [of the flag] in 1873 in the Boston Navy Yard,” Jones says. The photo–a black-and-white image on exhibit with the flag itself–shows a tattered flag with a gaping hole in the center–strung from a tall building with people peering out from behind shuttered windows.

“We know that souvenirs started to be taken off that flag not long after the Battle of Baltimore in 1814,” Jones continues. “When the first defender died, his widow came and asked the family if they could have a piece of the flag that he so valiantly defended. And so she buried it [the remnant] with him. And so our guess is that someone quite prominent either asked for [the star] or it was given as a symbol of the family’s trust and faith that this person had done a great thing for the family or for Baltimore. My guess is that it’s either in Armistead’s grave. The other supposition is that it could possibly be in Lincoln’s grave. Those are all supposition. Georgianna Armistead mentioned in her writings that she knew to whom the star was given, but wouldn’t let anyone know. So we will never know.”

The flag–once a simple utilitarian military object–soon evolved into a highly coveted symbol of the young nation’s fortitude.

“People kept asking for it to be brought out for different commemorations,” Jones explains. From event to event, the Armistead family toted the gigantic flag around in a large, white canvas bag, also on display at the exhibition–a burden that eventually grew too heavy for the family to sustain.

“Every time it would be brought out, it would be taken out of this bag and it would try to be hung, and it was a challenge,” Jones says. “Being such a large artifact, it was difficult for them to continue to do that.”

In 1912, the grandson of George Armistead gifted the flag to the Smithsonian Institution, but with the specific request that it always be on display. It remains today the only object from the Military History collection that has been on nearly continuous display since being acquired by the Smithsonian. The entire Military History collection includes about 1,500 flags, including the iconic flag known as “Old Glory,” as well as various Revolutionary War flags, some of which are on display while others are in storage.

Shortly after adding the Star-Spangled Banner to its permanent collection in 1912, the Smithsonian hired prominent flag-preserver Amelia Fowler to conserve the flag through her patented treatment that intricately stitched the flag to a linen backing that was meant to strengthen the flag. She and her team of 10 seamstresses working in the Library of the Smithsonian Castle also visually filled in the flag’s famously missing pieces, including adding backing that was dyed to show missing ends, as well as where the missing star would have been located. The result, says Jones, was that the Star-Spangled Banner became more like a tapestry, making it difficult for visitors to discern which parts were original to the flag.

“What Fowler did was put in, oh God, a million holes into many of the fibers of the flag itself,”  Jones explains.

Modern-day conservators later discovered that the Fowler treatment, in combination with years of the flag’s weight as it hung on display, had  structurally damaged what would soon be seen as a treasure so important to U.S. history that it was covertly removed from the Museum during World War II, according to Jones, so that it would not be a vulnerable target. “The treasures of the Smithsonian were crated up and stored in a warehouse in Luray, Va., for a short period until everything was safe, and the Star-Spangled Banner went with it,” she explains.

It was in the mid-1990s when the wooden cover that lowered and rose every half hour to the tune of the Star-Spangled Banner eventually broke that Smithsonian leadership realized the flag needed to be treated in a different way, preserved in a different location.

“The weight of it hanging was tearing even more of the actual flag,” Jones says of the decades the flag hung on view for visitors. “And it was so filthy. If it had stayed in the atrium, where it was, it was open to all the elements. There was a lot of dirt and debris on the flag because it wasn’t covered. And most of that consisted of skin cells, and hair and dirt, and a lot of particulate from the rocks and dirt covering the walkways on the National Mall. They get ground up and your feet bring in all of the dirt and everything else,” Jones explains. “So with the continued degradation of the wool fibers, everything was starting to fracture. If it had stayed that way for another 50 years, there might be very little left that was intact.”

So in 1998, an elite team of wool experts, scientists and conservators embarked on a 10-year preservation project that included assessing the stability of the flag, documenting the findings and carrying out the conservation treatments, which–in this case–meant largely undoing previous treatments. Stitch by stitch, Jones explains, the team members–outfitted in Tyvek “bunny suit” coveralls to protect the flag from introducing other fibers or dirt, and lying on a gantry on a pad above the flag–used microscopes and headlamps so they could cut the stitches and remove the dirt and debris from the fibers. Jones still has plastic bags filled with most of the 1.7 million stitches in her collection–objects that tell one small part of the flag’s intricate story.

“Then they found all these signatures and all these tell-tale signs of use as well as of souveniring, and where things were cut out and how they were stitched,” Jones says of the conservators’ work. “And they were actually able to date many of the patches that were put on the flag. All of that gets documented, and we’ve got probably 30 linear feet of documentation of different reports on every inch of that flag.”

Once it was ready for its new home in the chamber where it now is on display, the flag needed to be transported–carefully. It took a 4-foot tall, 30-foot wide roll, a layer of high-tech sailcloth and two layers of Tyvek sheeting covering both sides of the flag for it to be safely moved. It then was laid out on a custom-built stainless steel table, which inclines to 10 percent for display.

That’s when Jones noticed something when she got down close to the flag: in essence, it had come back to life.

“Freed from its stitches to the backing,” Jones recalls, “it began to relax and that made the threads and the weave of the flag start to come back together, which made it start to pucker and ‘move’ like it was meant to do.”

Removing more than a million stitches from the linen backing had restored the flag’s own freedom, a virtue that Jones–the curator of an object so revered amidst a collection of 150,000 other significant Military History objects–points out is not only what the flag symbolizes but what the Smithsonian embodies too.

“This is the beauty of it, and this is how I believe all exhibitions are, not just exhibitions about the Star-Spangled Banner,” Jones explains. “That is, every person brings to every object their own personal understandings and beliefs. The visitor wants to think about it what they want to think about it, and we’re not here to tell them it’s right or wrong. We’re just here to present it, and surround the object with the history that it’s a part of.”

“And that’s the beauty of putting that flag in that chamber: it represents all America,” Jones continues. “It represents all ideas, all ideals, all values. Not just one. And that is the beauty of our flag, and how I see our flag representing all Americans. That’s the beauty of why we’ve presented it the way we have. It is in there, and it says nothing other than those words that Francis Scott Key penned, that he was inspired to write down at the end of that battle, because we were in the fight of our lives, determining whether our nation was going to exist as a new nation or whether we were going back under British rule. And the Battle of Baltimore in the War of 1812 was the ultimate battle to figure that out.” 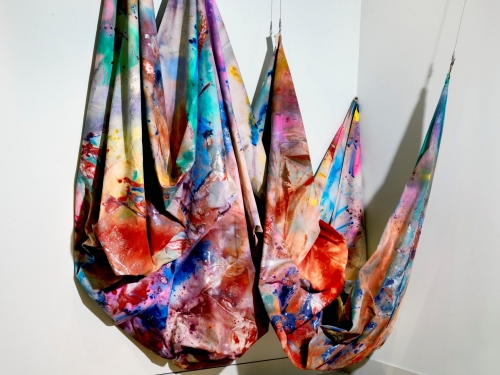